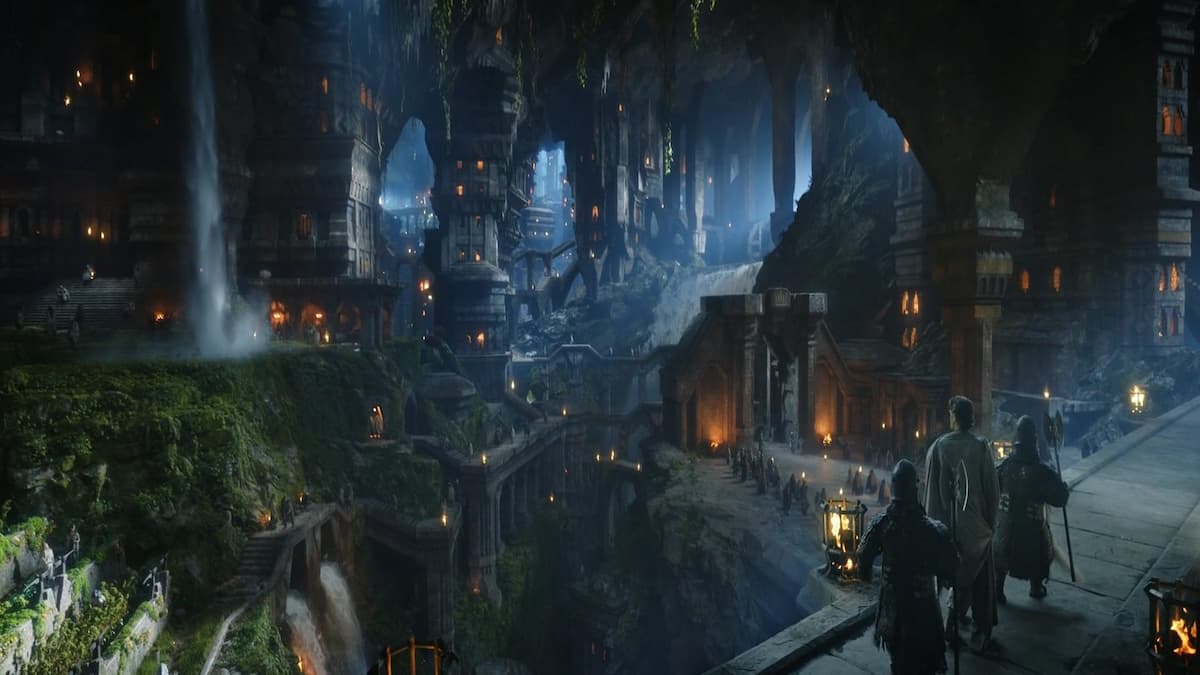 It’s hard to say, whether Amazon Prime’s Rings of Power series is 100% absolutely connected to Peter Jackson’s respective trilogies. But one thing is for sure – the show is a hit. The most fascinating part is that although Rings of Power shares a couple of characters from the original trilogies (albeit featuring different acting talents in those roles), much of the story is very far removed from what we see in the films. After all, it does take place an entire age before. But, before we dive into the actual meat and potatoes, some context is needed.

In the second episode Adrift, Elrond travels to Khazad-Dum (or Moria as it later is called) in search of the famed Dwarven craftsmanship to work on a top-secret “project” with Lord Celibrimbor. Lore enthusiasts will indeed note that this is in regards to crafting the would-be rings of power, as Celebrimbor was very involved in their forging. Finally, we meet members of Durin’s Folk (including King Durin himself) and before our time in Khazad-Dum concludes, we see King Durin peering over a box with a mysterious glowing object inside (that will no doubt be unveiled in a different Rings of Power episode). So, let’s talk about potentially what’s in King Durin’s box in the Rings of Power?

Firstly, it should be noted that at least at the time of publication, the contents of the box are still unknown. All of these are theories utilizing knowledge of both of Peter Jackson’s respective trilogies as well as Tolkien lore, so it is purely speculation. Regardless, here are the three most likely theories all things considered:

Upon rewatching the scene from the episode, one could distinguish a kind of sickly expression of paranoia on King Durin’s face. Although one could argue that Dwarves are often greedy by nature, this look draws a somewhat striking resemblance to Thorin Oakenshield, the heir to the Dwarven throne in the Hobbit films. Specifically, he was overtaken with greed and obsession when trying to recover the Arkenstone.

The object in question was the shiny heirloom of Durin’s lineage, from the dragon Smaug who had taken residence in the Dwarven stronghold Erebor. The idea behind it was that it would give Thorin the power/right to unite all the existing Dwarven clans under one banner. The Jewel was so precious to Thorin that he was later buried with it when he passed away following the Battle of the Five Armies.

Although this is the only entry on this list to not be featured in Jackson’s trilogies, it is never the less important and worth considering. The Silmaril(s) were three very unique and priceless jewels that were originated in the First Age. For anyone more versed in the books themselves, this is where the short story collection, the Silmarillian, gets its name from.

Specifically, in Tolkien lore, the Silmarils were jewels tied to the origin of Valinor, the Universe, as well as the races of Elves, Dwarves, and Men (all of whom fought over these jewels for a very long time). However, as these were said to be very thoroughly hidden this is also less likely. It should be noted though that the aforementioned Arkenstone basically took on the aesthetics and purpose of these legendary jewels in the Hobbit movies.

Of all the possibilities, Mithril is the most probable for several reasons. Considering the aforementioned greed that Dwarves were known for, it would stand to reason that the very Mythril ore that Moria lays upon is something they are not too eager to share. After all, Mythril was so incredibly rare that it was seen as a very coveted resource by the Dwarves, and they had no interest in sharing it.

The Mythril, once harvested, also had an incredible shiny, almost translucent hue to it and it was, to quote Bilbo Baggins in the Fellowship of the Ring, “light as a feather and as hard as dragon-scales.” Building off of that, this would also be a callback to the Mithril shirt (shown above) that was gifted to Bilbo by Thorin Oakenshield, which in turn was later passed onto his nephew Frodo.

So, there you have it. Those are the most likely objects for what’s inside King Duran’s mysterious box. The contents will probably be revealed sometime over the remaining six episodes which are set to release over the next few weeks. There are sure to be many other mysteries, overall questions and easter eggs. So in the meantime, feel free to explore other related Rings of Power articles, like what was up with that diseased cow. Not to mention, we have a bunch more related articles for you to check out down below and in the future, too.