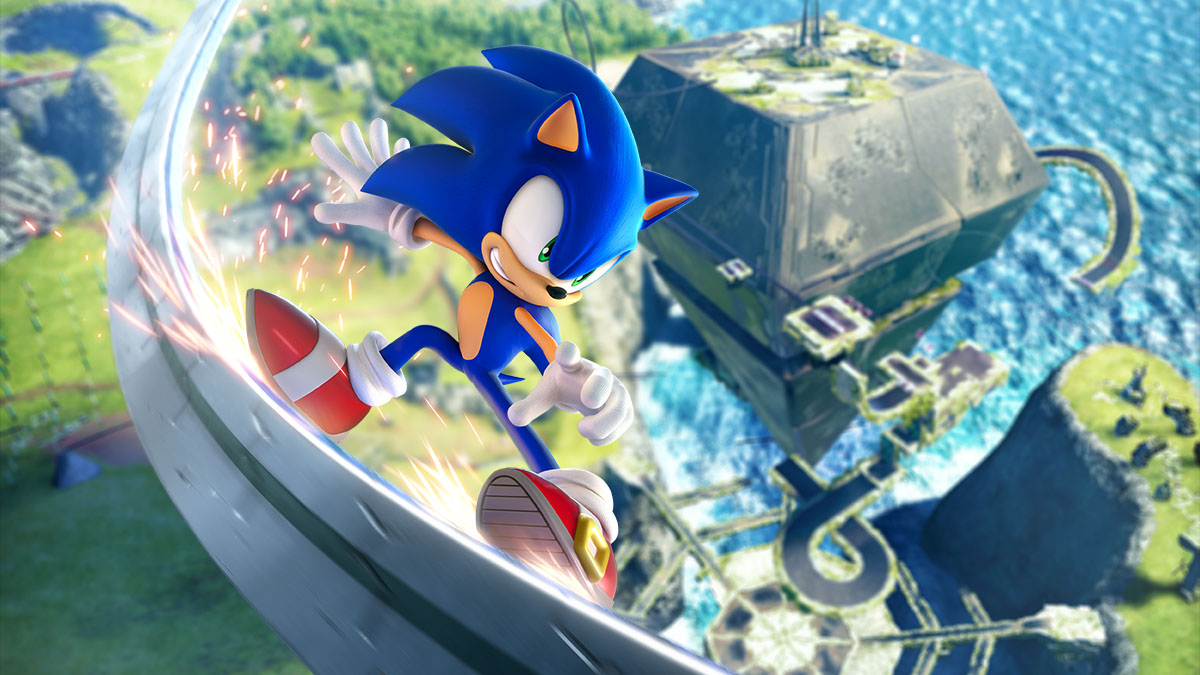 This is certainly a rather large shift from previous Sonic Games, and to know more, we interviewed Sonic Team head Takashi Iizuka.

Izuka-san discussed this brave new frontier for Sonic, the challenges it created, the relationship with the team working on the movies, and the growing fanbase they have provided the franchise with.

Giuseppe: I have a feeling that it has been less challenging, as of late, to satisfy the fans with 2D Sonic, while it has been more difficult for 3D Sonic games to make the fanbase happy. Your team always appears to be trying to look for new things and to find the right recipe to make that happen. Are you confident that this is the right one, the one that’s finally gonna make the fans happy?

Takashi Iizuka: Sonic Frontiers represents the modern Sonic kind of gameplay. It’s in the 3D format that we’ve taken to the next level and evolved that 3D game experience, turning it into what we have for Sonic Frontiers. The 2D gameplay has 30 years of history and it’s that classic original content that we understand the fans like and appreciate.

We have a good understanding of what they like about 2D Sonic. And actually, we did release Sonic Origins this year which is that 2D offering for those fans that really appreciate that content.

But when we talk about trying to get the fans happy about the content we provide, we never try to release one game that’s going to get our 2D fans and our 3D fans happy at the same time

When we released Sonic Forces, we also had Sonic Mania. We had a 3D game offering and a 2D game offering. This year as well, we’re doing the same thing.

We want to make sure we’re delivering the game to the fans who like that kind of content, so we do have Sonic Origins released this June, and later in November, we will be releasing Sonic Frontiers for the 3D fans.

Giuseppe: You have created pretty much an open-word kind of gameplay. Was it challenging to make Sonic work with it?

Takashi Iizuka: Up until now, fans have been familiar with the linear design of the previous games. Back then the team was thinking about how to make Sonic feel good and fast and cool. We believed we really needed Sonic to be traveling on a linear path. A lot of the time spent in development was about “how can we make this linear path that he’s running on feel good when he’s running really fast”

When we talk about 2D Sonic or 3D Sonic for the past 30 years, we really believed that they needed a path and the path was really what made the game, but we really wanted to kind of break away from that.

For the past 30 years, that’s what brought us all that great content, but as we think about moving forward, we really need this open design for people to be able to run around and do things they want to do, and that’s where the “open zone” concept for this game was born. We spent a lot of time on it. It’s not easy to just make a world and drop Sonic in it and have it feel good. So we spent a lot of time iterating, creating something, testing it out, seeing if it felt like Sonic was really running fast, and if it felt fun, and then throwing it away and trying again until we got it right.

Giuseppe: When I first played Sonic Frontiers, it certainly felt very different from everything you’ve done before. Past 3D Sonic games kind of felt like an attempt to translate 2D sonic in 3D instead of their own thing. Is this your attempt to completely diversify the two options to see if it works and is embraced by the fans?

Takashi Iizuka: We did want to make a brand new game, and that was our intention from the beginning. We have created lots of linear gameplay, and people like it, but we want to take it to the next level and evolve it, and that open-zone format is exactly what we wanted to do from a design perspective as well from the beginning.

However, we do realize that a lot of people do enjoy that linear time-attack game style, so we did want to make sure we provided that inside Frontiers, and that’s ultimately the Cyberspace levels that you’ve played. It is that traditional linear format where people get to challenge themselves to run through as fast as possible.

Giuseppe: I imagine doing something so different from your studio’s past games must have been a big challenge. What was the most challenging aspect of this process?

Takashi Iizuka: Yeah, as you can tell from playing the game, we have really large islands created for this open-zone environment so that you can run around them. We realized that we needed to have all the very iconic high-speed action that Sonic does when he’s running and jumping.

But if we just filled the island with high-speed things to do, the island is still really, really big, and it’s not going to feel like it was populated with enough things. That’s what we had to challenge ourselves with doing from a design perspective: what else can we put on this island? What can Sonic do outside of just high-speed action? That’s when we thought of the puzzles that are on the islands, the enemies that you can battle against, and the collectibles on the islands.

We really wanted to make sure we were populating the islands with enough stuff that people are going to get curious about exploring, trying out things, and enjoying running around.

Giuseppe: There is one 3D Sonic that has been really successful, and it’s the Sonic movies. Has there been anything you have learned or that you brought in from the movies, or that inspired you?

Takashi Iizuka: The game development for Sonic Frontiers actually started before the development of the movies, so we didn’t really put anything from the movies into the game, but one of the things that we did learn as movie one and movie two came out, is that our audience expanded a lot and we have people who are Sonic fans who have never played a Sonic game. On top of that, we have really young kids who are now fans of Sonic the Hedgehog.

So we really want to make sure we’re providing game content and fun things to do for this really wide audience, people who aren’t very familiar with games and aren’t hardcore gamers and who are part of younger audiences.

So this year, we released Sonic Origins to make sure people who have never played a Sonic game before get that original experience. On the other hand, we’re releasing Sonic Frontiers later this year for people who are more hardcore Gamers. But we’re thinking about that really wide audience and providing content for that entire audience.

Giuseppe: Do you think there is anything in the movies besides the size and scope of the fanbase that you can work into future games or use as inspiration?

Takashi Iizuka: Just so we tell you the full story of what goes on, the people making the movie actually really respect the games and make sure that the portrayal of Sonic and of the things that he does in the movie are respectful to the property.

They also take a look at our games and they think of all the interesting Easter eggs and references from the games that they can pack into the movies to get the game fans excited about them.

So instead of having the games being inspired by the movies, it’s the movies that are really trying to get as much from the games as possible.

Giuseppe: I have to say that if you actually included toothy Sonic in the games as an Easter egg, I mean the rejected version from the movies, that would probably work. He has become kind of a meme nowadays.

[At this point, both Iizuka-san and the translator laughed for a couple of minutes. It appears that this isn’t going to happen]

Giuseppe: Do you have anything else you’d like to share about the game for the fans of the franchise, and perhaps even for those people who have seen the movies but haven’t played a Sonic game yet?

The success of movie two has been really amazing and it really brought a lot of people into the audience. So we thank everyone for enjoying movie two.

So we have this huge range of content that we’re going to be providing to people, and in the past 31 years, we haven’t had this much content come out ever.

So if you’re new to the franchise and you kind of want to get your feet wet into what a Sonic game is, we really believe Sonic Origins is going to be that title for you. It’s all of the original content. It’s what got the hardcore fans into Sonic the Hedgehog.

And if you’re a hardcore gamer or you’re someone who’s played a lot of Sonic games, we believe Sonic Frontiers is going to be an amazing game for that audience.

It’s the format of gameplay that we think people are expecting and wanting to play, allowing freedom for you to go and do the things that you want to do as Sonic the Hedgehog, so we’re really glad that we have that content. We hope the fans out there get to play, enjoy and watch all that we have in store this year.

Sonic Frontiers will be released this holiday season for PC, PlayStation 5, PlayStation 4, Xbox One, Xbox Series X|S, and Nintendo Switch.