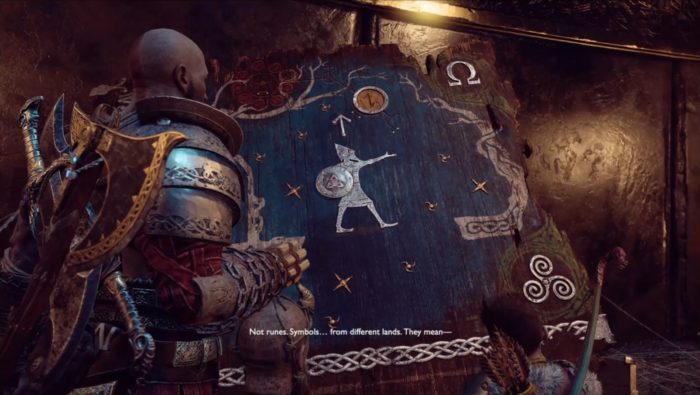 It’s safe to say that the transition from Greek to Norse Mythology has been a resounding success for God of War. The deities and ancient figures of Scandinavian folklore make for a colorful cast of characters, and the ethereal beauty of the game’s eight Norse Realms are some of the most visually interesting locations we’ve ever seen in a video game.

Yet the change in setting has also teed up a new layer to the series’ narrative. For the first time, God of War lore confirms that ancient mythologies existed concurrently, and Kratos is obviously able to travel between and interact with them.

Naturally, then, even as we embarked on our adventure across the frigid northern lands of Midgard, we couldn’t help but wonder where the series might go in the future, and we think one scene in the game might actually provide one almighty great clue.

Without wading too deeply into story spoiler territory, we’ll say that there’s a certain scene in which Kratos and Atreus uncover one of the many story images in the game depicting a scene from Norse mythology. Except this one is slightly different. Kratos himself remarks that the runes adorning each corner of the image aren’t runes at all but symbols from different lands — symbols of other ancient cultures that exist simultaneously to Greek and Norse.

You can see the images of these symbols below for yourself:

So what exactly are these four symbols? You’ll likely recognize the U-shaped symbol in the top right — it’s a Greek Omega symbol used to represent Ares, the God of War throughout the franchise.

The top left symbol is the ancient Egyptian symbol of Ra, God of Sun. What’s particularly interesting about this reference is that Sony Santa Monica Creative Director, Cory Barlog, spoke in an interview earlier this year explaining that God of War might well visit Egyptian mythology in the future. During its conceptual design phase, the studio presumably brainstormed several alternate mythologies for God of War, of which Egypt and Mayan culture might well have been possibilities it opted not to use.

So where else might the series be heading if we’re to believe these symbols provide a clue? The bottom right symbol is a Celtic Triskelion, or Triple Spiral, and is one of the most widely used symbols of ancient British culture. It essentially means the movement of life: past, present, and future. Just across the North Sea from Scandinavia, might the series be going all Hellblade: Senua’s Sacrifice on us with a Celtic-themed adventure in the future?

Over on the bottom left, the symbol is a Hidari Gomo, Mitsudome (threefold tomoe), which is a symbol used throughout different facets of the Japanese Shinto religion. It is commonly associated with the Shinto war deity, Hachiman. Hachiman is known as both the God of War and the God of Warriors, and his symbol was later used by both Samurai and the ruling Japanese aristocracy. Perhaps this is a hint that ancient Japanese Gods might one day feature in God of War?

Of course, these symbols might not signify anything more than just a representation of other cultures deemed appropriate by one of Santa Monica’s artists. Not to mention, theories of an all-new God of War setting in the next major installment might have already been dashed by an interview with Sony Santa Monica’s senior online community strategist Aaron Kaufman, who suggested that God of War would likely continue in Norse mythology, based primarily on the amount the studio has already invested in its design.

Yet Kaufman didn’t categorically state that a change of scenery was impossible, and it doesn’t rule out a crossover with Gods of other mythologies even if the next game is still about Norse mythology.

We’d certainly like to believe there’s something more to these symbols than arbitrary placement by an artist.

What do you think? Are we reaching here or are Kratos’ travels between different mythologies set to become a central crux of the series narrative moving forward? And is there even the slightest chance that Barlog’s previous comments about the potential use of Egyptian mythology, the proximity of Celtic mythology geographically to Scandinavia, and the fact that the Mitsudome symbol was worn by the Shinto God of War, telegraphing potential settings for future God of War games? Let us know in the comments below.

For those interested in the particulars of the Greek mythology which forms a basis for God of War’s lore, here are some facts to consider:

What Is the God of War Symbol Called? Answered

As mentioned earlier, the original circular God of War symbol with two flat edges underneath (seen on the left above) is called Omega. It is a letter in the Greek alphabet, which has always been used as the logo for the game.

However, since God of War’s change in setting from Greek to Norse mythology, the series’ logo has slightly changed and now looks more circular. Also, if you compare the two images above, you’ll notice that the new logo also has a snake at the bottom. This newer God of War symbol now looks something more similar to an Ouroboros, which is a Greek and Egyptian symbol that essentially represents the circle of life: destruction and rebirth — hence it showcases a snake eating its tail. Of course, the snake is likely also a reference to the World Eater from the 2018 game.

As for what the symbols on the sign actually mean, they spell out RAGNAROK, the name of the game, and a reference to the catastrophic series of events in Norse mythology. Each letter stands for a rune: Raihdo, Ansuz, Gebo, Nauthiz, Othala, Kenaz.

What the Viking Symbol Inguz Means

Another symbol that features prominently in God of War is the Inguz, which was used in ancient times to denote a time deliverance, of new life, a new path. It is affiliated with the Goddess Freya, and also indicates love and fertility.

What the Viking Symbol For Protection Is

The Viking symbol for protection also features throughout God of War 2018. It’s called Ægishjálmur, otherwise known as “Helm of Awe” or “Helm of Terror,” and it’s actually a magical stave that is very famous in Iceland. As we’ve mentioned in another of our articles discussing Norse Mythology (as it is related to the upcoming Hellblade II), it was used by warriors of old to induce fear in their enemies’ hearts and prevail in battle.

If you’re wondering what Atreus‘ tattoos essentially translate to “good at shooting (with a bow).” That’s according to one Redditor. You can check out a full breakdown of all the game’s tattoos here.