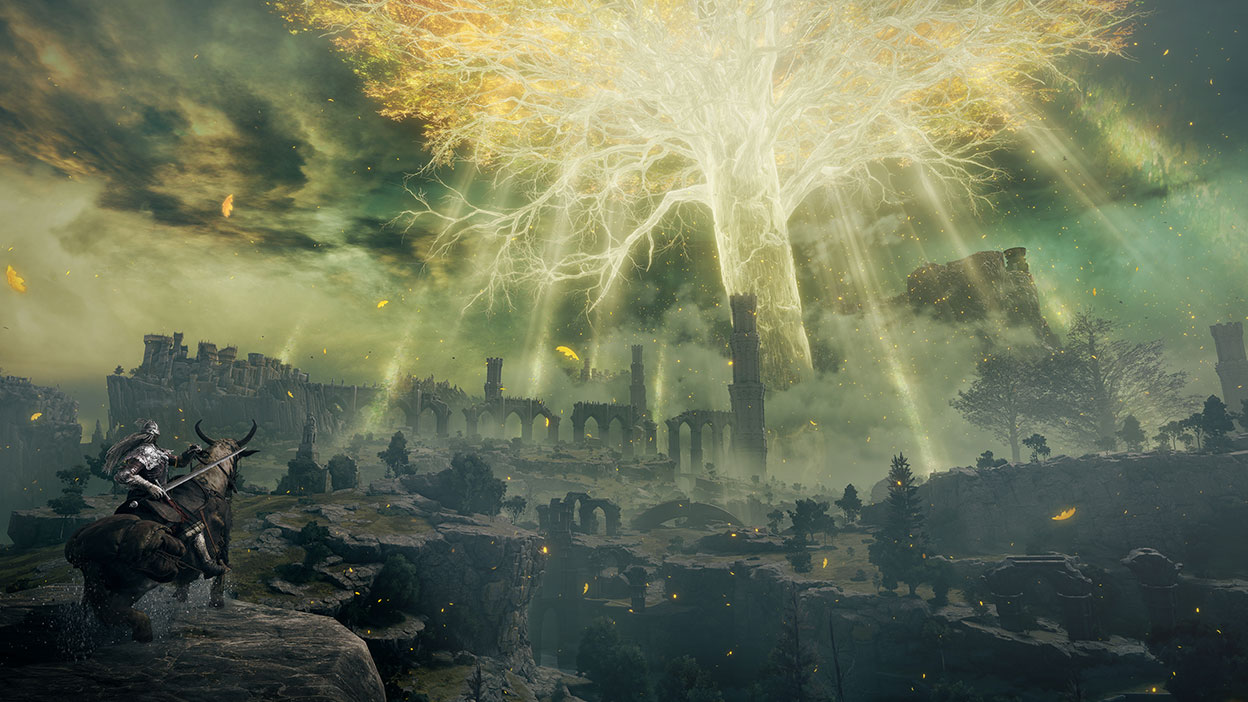 There are times when I feel completely directionless playing Elden Ring. I know that I’m supposed to find the next Legacy Dungeon and beat another demi-god boss –wherever they might be–, but on either side of these focused areas, I spend hours waylaid on some tangent out in the open-world.

This might be after having met a rambling NPC tempting me to pursue something that sounds shiny and interesting; other times, it’s because I find one of those decrepit statues pointing out a nearby dungeon. Often I’ll just settle into grinding a newly discovered area for experience… then I’ll have completely forgotten what I was told by that rambling NPC earlier.

I should be taking notes while playing Elden Ring. I saw people on Twitter suggesting that was a good idea, but I’m lazy and haven’t gotten around to doing it yet.

So, I find myself eternally half-lost. Out of habit, I go to press the menu button for objectives and quest journals before reminding myself that I’ve played Souls games before, and no such help exists. This is a hardcore, full-fat gaming experience!

The difference this time, though, is that where Souls games are more or less linear, save for backtracking and shortcuts that cleverly intertwine different areas, Elden Ring is most certainly not. In Bloodborne and Dark Souls III, I was never truly really lost. You just go forward.

There’s not really a forward direction in Elden Ring, and I’m acutely aware that as I’m totally absorbed exploring The Lands Between (read lost), I’m leaving unfinished errands and half-completed quest arcs behind me. It’s bothersome in some respects, as I know I’m missing things along the way, and I’m making mistakes as I go.

I’ve wasted countless Stonesword Keys on unsuitable items for my character build, and I’m sure that finishing at least of the NPC questlines I’ve forgotten would have netted me some super important gear. Also, I’m definitely not piecing together the mysteries of The Lands Between in a way that would offer me more understanding of its fascinating lore in the way I would like.

I’ll have to replay the game again with a video walkthrough, I think. That way I won’t miss anything next time. I should probably do some reading up on the story and lore if I truly want to understand the nuances of what’s going on, too.

I’m 30 hours into the game, and I suppose it will be another 30 before I’m done. Then there’s the second playthrough, the watching of videos, and the reading of lore to really get a handle on Elden Ring. Urgh, the more I think about it the more I consider it all bothersome, indeed!

And yet, I wouldn’t have it any other way. It occurs to me that Elden Ring is so incredibly captivating precisely because it never reminds me what I should or shouldn’t be doing along the way. It doesn’t care if I see everything or fail to work out the ramblings of an NPC or the puzzle of a dungeon, and of course, if its mini-bosses are so brutal that after a single death, I run away with my tail between my legs never to return.

The fact that there’s no quest log or indicators reminding me of that failure when I reboot the game makes every adventure feel more or less like a fresh start. And every play session really is an adventure in the truest sense because of all this — I yearn to explore and discover because I have absolutely no idea what awaits me around each corner.

It’s such a breath of fresh air after having recently played games like Dying Light 2, Horizon Forbidden West, and even my beloved Ghost of Tsushima. All of these titles have an incessant amount of quest markers and waypoints to handhold you through every inch of the game, almost as if the developers are terrified your mind might wander, get bored, and turn off the game for good.

But I’m convinced this is totally the wrong way to approach open-world game design, at least if you’re intention is to create a truly immersive environment. Since virtually everything in a single-player video game is a scripted event, I feel like I’m being strung from point to point, making the experience less authentic and believable.

With the reigns loosened in Elden Ring, though, void of the deliberate attempts to shepherd me and instead faced only with this exceptionally well-design, compelling sandbox before me, I’m encouraged to explore all by myself. Every discovery feels organic, and more importantly, immensely rewarding.

Nintendo seemed to understand this with The Legend of Zelda: Breath of the Wild, letting players explore the entire world at their whimsy from the get-go. Heck, they can even almost fight the final battle right from the jump. Both games are among the most critically acclaimed of all time, and their open-world choices are a big part of that. Are other developers going to catch on soon?