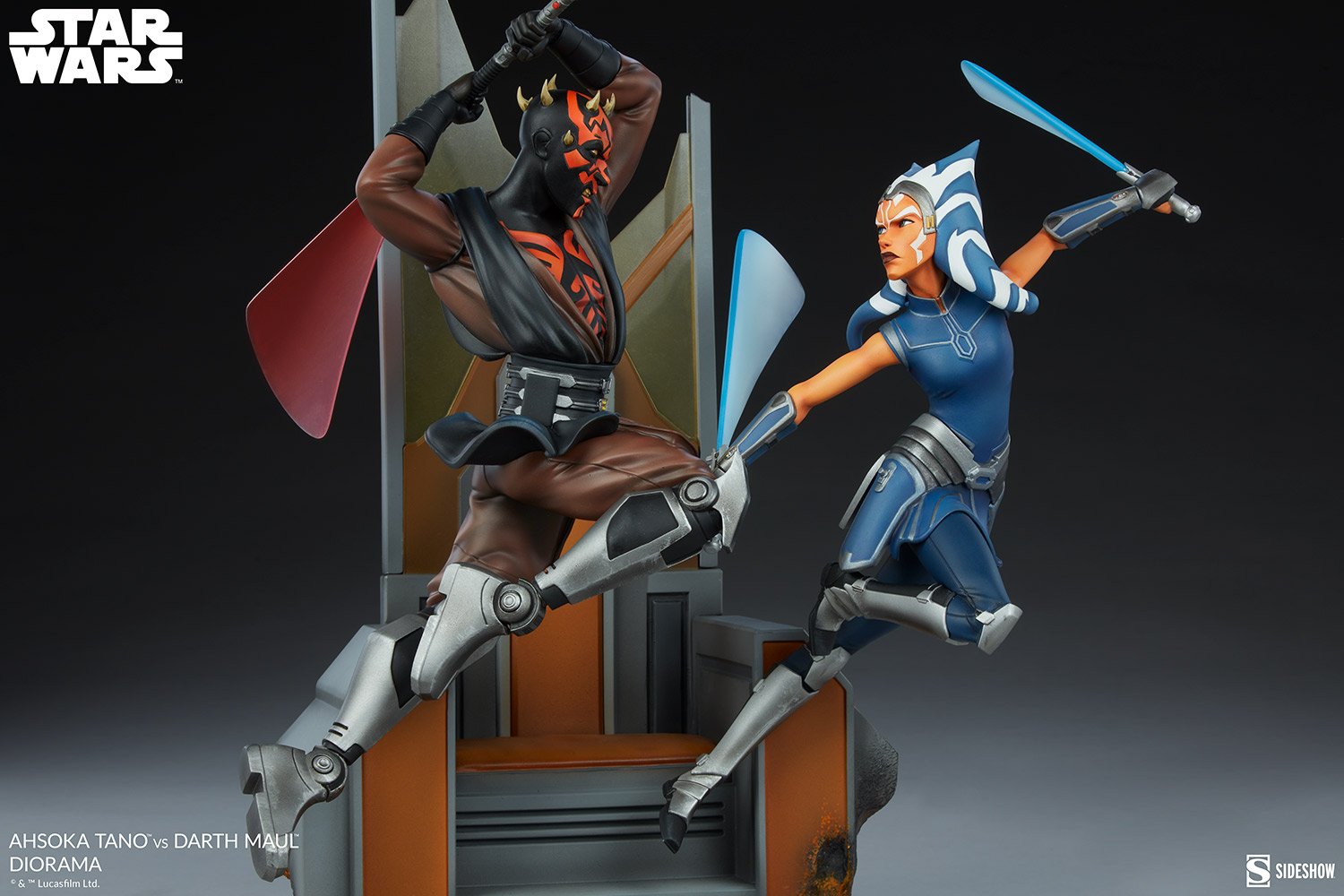 Whether it’s cartoons like Star Wars Rebels and Clone Wars or live-action like The Mandalorian and Solo, the last few years have been kind to fans of Ahsoka Tano and Darth Maul, as we’ve gotten to see a lot of their backstory unfold. That doesn’t even include the pending release of Obi-Wan Kenobi and Ahsoka on Disney+, which is set to give both characters even more of the limelight.

To celebrate the return to prominence for Ahsoka Tano and Darth Maul, Sideshow Collectibles has just revealed a diorama that depicts their battle from Star Wars: The Clone Wars. The epic duel measures 20” tall and 14.55” wide and is set against a Mandalore.

You can check out the official description for this Ahsoka Tano vs Darth Maul Star Wars diorama below:

Inspired by their fateful confrontation in Star Wars: The Clone Wars, the Ahsoka Tano vs Darth Maul Diorama measures 20” tall and 14.55” wide, set against a Mandalore throne room environment base. Shattered windows and scorch marks on the throne set the scene of a high-octane battle in progress, as the ex-Padawan and former Sith go toe to toe in a graceful, skillful clash of Force-wielding ideals and lightsaber blades.

The polystone Ahsoka Tano vs Darth Maul Diorama features two fully sculpted figures with detailed costumes and paint application based on their animated appearances. Darth Maul’s design includes his signature black and red Zabrak markings, a horned portrait, a black and brown bodysuit, and cybernetic legs. As a Togruta, Ahsoka Tano has an orange complexion with white facial markings, her white and blue montrals and lekku, and she wears a blue costume with silver armor accents. The duo’s unique lightsaber blades are sculpted with a sweeping visual effect to give the impression of active movement as they duel their way through the Mandalorian chamber. Packed with power and personality, this Star Wars diorama is a must-have centerpiece for any fan’s shelf.

Bring the epic battle from Mandalore to your Star Wars collection with the Ahsoka Tano vs Darth Maul Diorama today.

Anyone interested in getting their hands on this one-of-a-kind diorama can do so by heading over to the Sideshow Collectibles website. Pre-orders are available now for $595 and are expected to ship between Sep 2022 – Nov 2022. While you’re here, be sure to check out all of the Star Wars-related content in the articles right down below, including plenty of news, quizzes, and features.