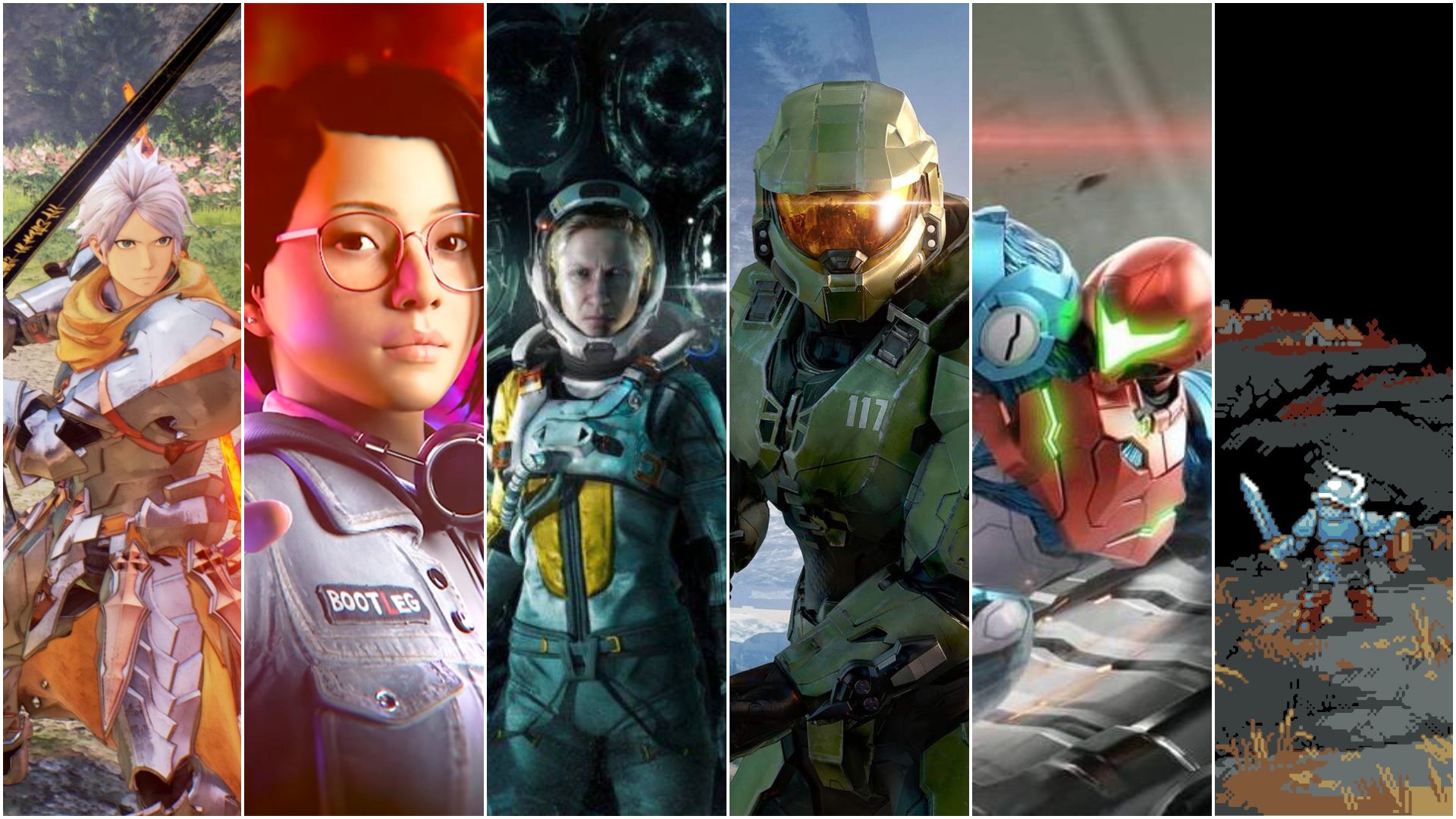 To wrap up our annual award period, which recognizes the year’s best games across many different categories, we now arrive at the best of the best. Voted on by Twinfinite’s editorial staff, these were our top six favorite games of 2021. Starting with a couple of honorable mentions and runner-ups, we are now ready to reveal our overall Game of the Year for 2021.

Note: This article does not contain any explicit spoilers, but in some entries, it does mention elements of the plot when relevant that someone that wanted a completely blind experience may want to avoid. We suggest skipping over any section you want to remain totally blind on.

Guides Editor Chris Jecks: I’ve always appreciated what Deck Nine and DONTNOD Studios have achieved with the Life Is Strange series. An unapologetically, hella cool indie title that’s all about the ‘larger-than-life’ problems of being a teenager, with a supernatural twist. It started with Max Caulfield and the ability to control time, then we helped Daniel grapple with his telekinesis powers and follow as he and his brother make their way to the Mexican border, and finally, in True Colors, we get Alex Chen and her empath superpowers.

Each of these superpowers brought its own gameplay gimmicks to the table, but it’s the empathy-based superpowers of Alex that really felt at home within the world of Life Is Strange and what it’s all about. It opened up new opportunities to interact with characters, learn more about them, and generally immerse yourself within the world far more than the superficial effects of their predecessors. Alex, while she hides how she’s able to see the emotions of those she’s close to, doesn’t shy away from using them to help people, and it results in some truly fantastic moments.

An epic, town-wide game of LARPing, helping unjumble the thoughts of an old woman struggling with dementia, or just learning what the story is behind that hole in the wall. These are all various examples where Alex can use her power to reach out to and improve the lives of those she’s around.

True Colors features all of the typical Life Is Strange accouterments, too. A fantastic soundtrack that nails the indie vibe, plenty of twists and turns in its typically over-the-top story, and plenty of likable and complex characters that help move the story along at a brisk pace. Oh, and don’t forget the absolute killer decision-making. That’s definitely in there, too.

With a fresh lick of paint in improved visuals and character animations, this is the most immersive Life Is Strange game I’ve played to date. It doesn’t quite capture the same magic as the original did over five years ago now, but it’s still a fantastic entry in a stellar series.

Deputy Guides Editor Ethan Anderson: The last mainline release in the series was Tales of Berseria back in 2016, and Tales of Arise is the long-awaited return that fans were hoping for. It revamps the combat and visuals, introduces great new gameplay features, and gives us a lovable cast of characters that we can connect to and root for in a storyline that deals with oppression and racial divide.

The party of Alphen, Shionne, Rinwell, Law, Kisara, and Dohalim really do carry the narrative with their distinct personalities and believable interactions. Some of the best dialogue and character moments even come outside of the major story beats. Shionne’s insatiable hunger and Law’s constant confusion in almost every situation are just two relatable — and often funny — examples of how the main cast feels real, even in this fantasy world.

The game also makes sure that the characters feel distinct during battle. The unique Boost abilities that each party member can use provide complexity and strategy that didn’t exist in Berseria. There are even flashy tag-team attacks that showcase teamwork in ways that few other Tales games do.

Tales of Arise is not only one of the most solid RPGs of the year, but also one of the very best games released in 2021. I can’t recommend it enough — to both Tales fans and curious newcomers alike.

Reviews Editor Zhiqing Wan: This year has been an embarrassment of riches for indie fans, and Loop Hero was simply the cream of the crop. This is easily one of the most unique games we’ve played all year; for a game that’s a mishmash of several different genres rolled up into one, Loop Hero is a surprisingly cohesive experience that brings everything together into a neat little package.

It’s a deck-building game with rogue-lite elements, along with a dash of some RPG mechanics, as well as a camp and base-building mechanic thrown in there for good measure. It sounds like a mess on paper, but it totally works. Almost every card combination you could think of comes with some sort of unexpected synergy that may or may not throw a wrench into your plans, and it’s a blast just trying to work with what you have and creating a build strong enough to survive loop after loop with minimal player input.

Loop Hero rips away all control from the player, and you’re unable to influence anything aside from the cards you put down and what you’re equipping your character with. Make the right decisions, and your adventure could go on for literal hours. Make a wrong move, and everything comes tumbling down like a house of cards.

Senior Editor Alex Gibson: Housemarque had reached something of a crisis point following the launch of Matterfall in 2017, which fused together two different genres in clever fashion but was ultimately plagued by the same issue that thwarted the developer’s best titles for years: it simply didn’t find a foothold in the market.

Having briefly flirted with the idea of pivoting toward a multiplayer battle royale title, the Finnish studio was given a chance by Sony to create something more within its own wheelhouse, but this time, on a AAA scale as a PS5 launch title with Returnal.

In hindsight, Returnal was a big roll of the dice for the studio, a proof of concept that its knack for designing superb, gameplay-centric titles could be made to appeal to a mainstream audience under the more forgiving conditions of a console launch window release. Well, if it was a control test then Returnal passed with flying colors. It isn’t just one of the best launch window games ever but among the best PlayStation exclusives of all time.

Typical of Housemarque, Returnal places a strong focus on challenging gameplay that feels absolutely brilliant to control. The shooting mechanics are unlike anything else we played this year; more or less a third-person equivalent of Nex Machina, one of the studios’ most acclaimed arcade titles. With the action now on a 3D plane, however, there’s a new element of verticality to dodging the hails of incoming alien firepower, as well as precision required to shoot back with all manner of upgradeable weapons. The boss fights proved some of the trickiest, but ultimately rewarding, moments of gameplay this year.

Of course, Returnal incorporates more than just gameplay; in a first for Housemarque, it’s also a story-driven, cinematic experience brought to life with terrific acting and cutting-edge visuals. The coming together of these new elements and the studio’s signature gameplay is something Housemarque fans have been yearning to see for years, and by all accounts, we’re expecting plenty more moving forward after the success of Returnal. Bring it on!

Staff Writer Rebecca Stone: Metroid Dread was originally planned back in the Nintendo DS days, but after years of no news, it had presumably been canceled and was never officially acknowledged again. Over a decade later, this fifth game in the main Metroid series finally reappeared at Nintendo’s 2021 E3 direct with the same title and with MercurySteam in charge of its development.

Since this was the first new 2D Metroid game in nearly 20 years, its success would be vital to the future of the franchise. Thankfully, MercurySteam proved capable of rising to the challenge. Metroid Dread is a must-play for both veterans of the series and newcomers alike.

It’s difficult to successfully blend tradition with innovation, but Metroid Dread does exactly that. Samus uses a wide range of abilities both old and new to thoroughly explore the hostile planet, and the areas are so well-designed that as soon as you start to feel lost, you manage to find yourself in the right place.

Much of Metroid Dread’s story is told implicitly through the environment, but the few cutscenes that exist are meaningful and memorable. The threatening E.M.M.I. zones provide a new type of stealth challenge that is tough but never unfair. Metroid Dread is not only one of the greatest games of 2021, but one of the finest works from a Nintendo franchise in years. Though Samus’s story seems to be over, I’m eager to see the direction in which the Metroid series goes after this.

Guides Editor Chris Jecks:  Few series have the same sense of grandeur and spectacle as the Halo series. Microsoft and Xbox’s flagship series has made an appearance on every iteration of the publisher’s hardware since its inception, popularising online multiplayer with Xbox Live and Halo 2 all those years ago.

Yet, recent entries had felt a little wayward — lacking ambition and struggling to keep up with the shifting landscape of games as a result.

Halo Infinite has changed that trajectory. Combining an exceptional free-to-play multiplayer experience that just screams Halo in every direction you look, with a campaign that adopts an open-world format for the first time ever in the series, Infinite has shoved two enormous rockets teeming with ambition and jettisoned itself all the way to the moon.

It’s this open-world format that really helps Infinite feel like the step forward the series needed. But 343 Industries has been clever in not being too ambitious. It reigned its ideas in, resulting in a much smaller open-world map, but one that’s packed with different activities to see and do. Combined with Master Chief’s newfound grappling hook that allows him to swing from tree to tree around the world, this definitely feels like the evolution the series needed.

Infinite’s not perfect. The co-op campaign is missing at launch, there’s room for more creative side mission content, and its multiplayer has wrestled with progression issues in its opening months (which are now, thankfully, largely resolved).

And yet, even with these setbacks, Halo Infinite blew everything else in 2021 out of the water. It has that level of polish we’ve come to expect from AAA first-party releases, writing and narrative that helped open up an exciting new future for Master Chief, gave us a glimpse of the man inside the spartan armor, and has generally fantastic FPS gameplay.

If you’ve got an Xbox or a PC capable of running it, Halo Infinite is a must-play. Whether you want to explore Zeta Halo on your own in the campaign, or group up with some friends in multiplayer, you’re sure to have an absolute blast.

Congratulations to our Game of the Year for 2021, Halo Infinite!

2021 wasn’t much easier for those in the game industry or fans at home. Many studios are still working remotely and dealing with the problems and stress that come from working through COVID-19. Likewise, many gamers are still going through many of the same challenges.

Thankfully, we still managed to get through the year, enjoyed some excellent games across a variety of genres, and exited 2021 with some hope that 2022 will be easier for those in the industry and gaming enthusiasts alike.

If you want to get in on the GOTY selection action yourself, participate in our reader’s choice vote! Agree with us, or tell us we’re dead wrong. Either way, we want to know what you think.

Last year, our editors and readers were on the same page regarding the Game of the Year. Will that happen again this year?