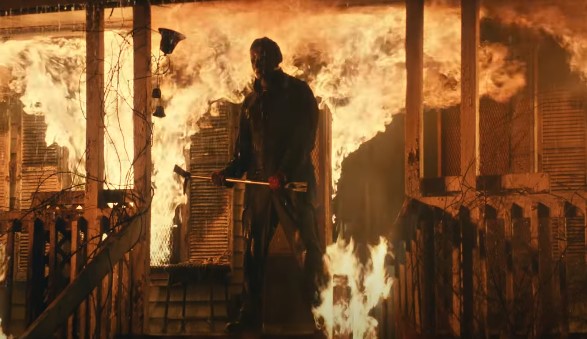 Earlier today on the Universal Pictures YouTube channel, the final trailer for the upcoming horror film, Halloween Kills, was released. The trailer features clips of the citizens of Haddonfield rising up against Michael Myers, flashbacks of the original movie, and it even gives fans of the franchise a teaser of Michael Myers being unmasked.

The trailer starts out with two kids swinging in a park talking about a creepy man wearing a white mask who has been going around trying to play hide and seek with them. Then just like clockwork, Michael Myers makes an appearance off in the distance, brandishing his trademark blood-soaked knife.

Then there’s a cut to a horrific scene where a group of people is trapped in a vehicle that is being terrorized by Michael Myers. He dodges a gunshot that destroys one of the windows, allowing the killer to get his hands on the people inside the vehicle. The trailer doesn’t show the fate of these characters but it’s likely not going to be a pretty sight.

Finally, the trailer also shows off a couple of brief clips that feature the people of Haddonfield taking on Michael Myers. There’s one short shot that shows Michael Myers surrounded by a bunch of gun-toting citizens of the town. And the trailer finally comes to an end with Myer’s mask being pulled off. But the video cuts to the title card before the mask is removed.