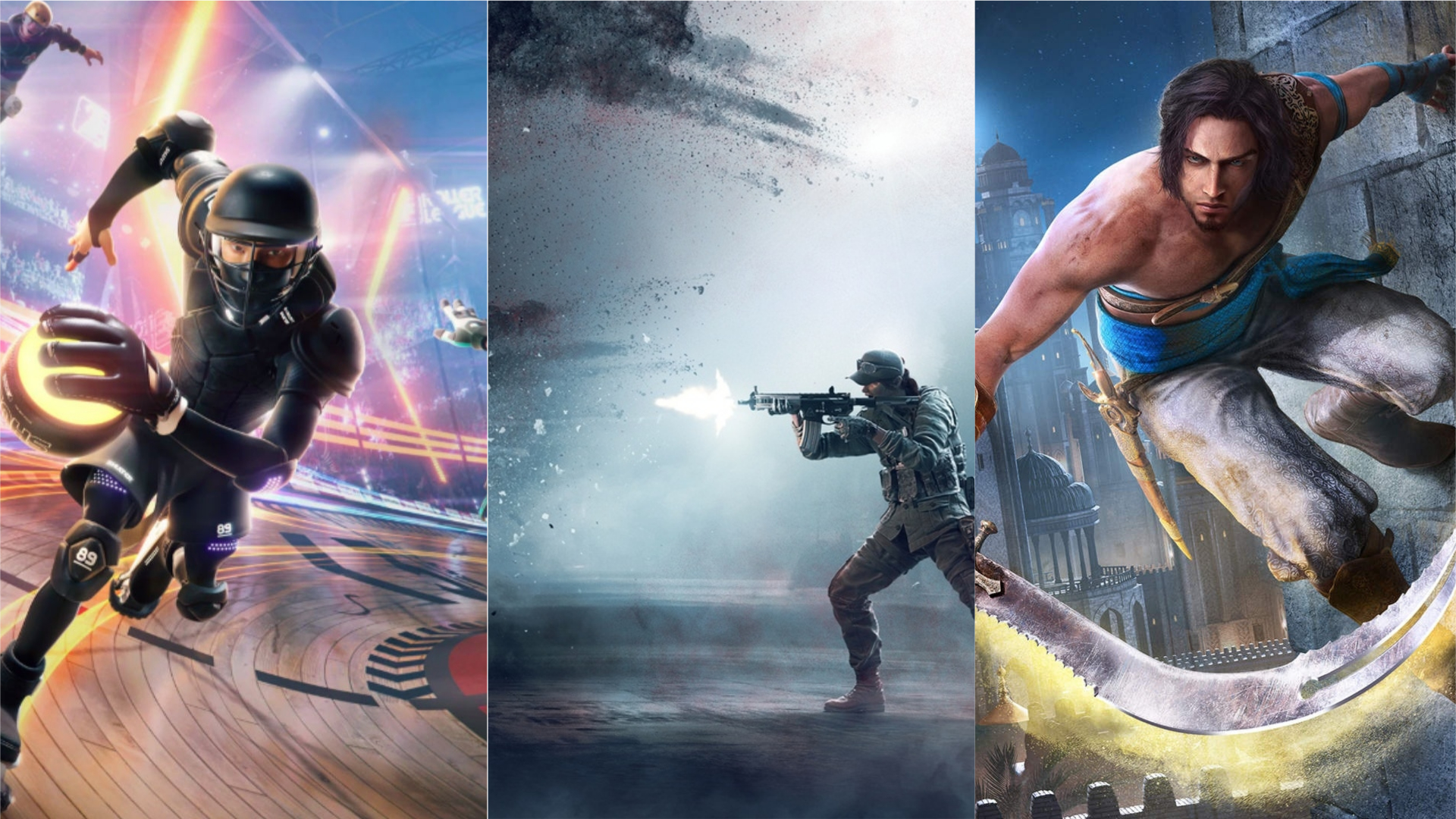 It’s that time of the year again where the games industry prepares for an onslaught of release dates, gameplay trailers, new game announcements, and all the other magic that E3 season brings. With a Ubisoft E3 2021 showcase confirmed, we’re taking some time today to run you through some of our predictions on what we expect the publisher to show while all the limelight is on them.

With no word on new installments in the Assassin’s Creed and Watch Dogs franchises — and Valhalla and Legion’s releases at the end of 2020 — it’s likely Ubisoft will look to its other series to fill the void. Fortunately, there’s plenty to do exactly that, so without further ado, here are our Ubisoft E3 2021 predictions.

Is it truly a Ubisoft E3 showcase without some corny choreographed Just Dance dance routine? The answer is, and forever will be no, no it is not.

Some people in vibrant clothing will come out dancing and smiling. Someone in a bizarre costume will bounce out midway through and join them, and they’ll all bop along to one of the past year’s biggest hits, like The Weeknd’s Blinding Lights.

After an excessive amount of timely running on the spot in time to The Weeknd’s superb synthy beats, they’ll all filter off-stage for big dog Yves Guillemot to stroll out and announce that Just Dance 2022 will be the biggest and best entry in the series yet.

Just Dance 2022 will release in November on everything including your toaster and that Nintendo Wii that’s been in your cupboard for the past decade.

Beyond Good and Evil 2 Trailer

Beyond Good and Evil 2 has had a bit of a rocky 12 months. Not only did the game’s director, Michel Ancel, leave the project back in September 2020, but Ubisoft’s financial report made no mention of a release window for the sequel to the cult classic.

It’s also one of Ubisoft’s most anticipated upcoming titles, so we’d hazard a guess that it’ll show up in one form or another at the company’s showcase at this year’s E3.

Given their are rumors that the game changed direction drastically following Ancel’s departure, it may be that we get a look at how this shift has impacted the gameplay or overall design of the game. A gameplay trailer may be too much to ask, but we’d be very surprised if there’s no showing of it at all.

Prince of Persia Sands of Time Remake was set to release on March 18 this year, but unfortunately due to the Covid-19 pandemic, the development team needed a little longer to polish the game up ahead of its release.

With no announcements or gameplay shown since then, it should come as no surprise that the Sands of Time Remake is likely to reappear at Ubisoft’s E3 2021 showcase with a slick new gameplay trailer showing off the fluid combat and platforming. As the screen fades to black in the trailer, we finally get a new 2021 release date.

We’d hazard a guess at an October/ November release date to help fill the void that the Watch Dogs and Assassin’s Creed series have left with seemingly no new instalment from either series set to hit store shelves this year.

Poor Skull and Bones. It hasn’t had much luck since its initial reveal back in 2017. Despite showing the game off the following year and giving media a chance to go hands-on with the game, the game didn’t seem to garner the reception Ubisoft had hoped for, and instead opted to consistently delay the game.

Even last month during its earning call, Yves Guillemot stated that the game had been delayed once again to a vague 2022-2023 window. While that more or less confirms that we won’t be getting a release date during the Ubisoft E3 2021 showcase, it doesn’t rule out the game returning for a bit of primetime on the big screen.

Given its been so long since we last went hands-on, there’s a good chance Skull and Bones has undergone some fairly big changes in recent years and is now looking to reignite interest in the ship combat/ pirate game ahead of its delayed release. Perhaps a quick overview trailer of new and improved features, as well as confirmation of the game’s performance on PS5 and Series X|S would be suffice. Whatever form it takes, we’d be surprised if Skull and Bones didn’t show up at all.

At the beginning of this year, Ubisoft and Lucasfilm Games announced their collaboration on a new story-driven Star Wars game. The title would come from Massive Entertainment (the developer behind The Division) and would be an open-world experience within the Star Wars galaxy, harboring the power of the Snowdrop engine to bring the iconic universe to life.

Few other details were shared regarding what shape the game would take. The internet was rife with theories of a looter-shooter-style game akin to The Division set in the Star Wars world, and we’d certainly be all for that.

Regardless of what form it does take, we’d expect to see some form of teaser trailer during Ubisoft’s E3 2021 showcase. Don’t expect a release date, though. It seems far too soon for anything like that right now.

Another of Ubisoft’s titles originally slated to release in early 2021 was Riders Republic. Unfortunately, due to the pandemic, the development team needed that little bit longer to deliver “the best fun-fuelled experience to our players,” and so delayed into later in 2021.

Riders Republic will give players a huge free roam world for players to mess around in with dirt bikes, wingsuits, snowboards, skiing, and more. Think Steep, but with more disciplines and a seemingly more varied world.

Give no new release date was provided when the game was delayed back in January, now seems as good a time as any for Ubisoft Annecy to let us know when we can expect to start shredding all kinds of environments.

We’d hazard a guess at an early December release date to be announced alongside a fresh new trailer showing off the game’s performance on Series X|S and PS5.

Roller Champions was announced back at E3 2019 and had watchers intrigued by its 3v3 competitive roller skating-based premise. Two teams of players compete against each other to earn 5 points by throwing a ball into goals on opposing sides of a track. It’s a pretty unique experience based on our time in the pre-alpha demo back in 2019, but outside of a closed beta period at the beginning of this year, little else has been shared about the game’s development.

But this is E3 after all, so you can bet your bottom dollar at some point, we’re going to get a game that goes live… right now! (TM). We’re hedging our bets that Roller Champions will be that game at E3 2021.

Following a stylish trailer showing off the frenetic action, “AVAILABLE NOW!” will flash up on the screen and we’ll be told we can download the game from digital storefronts for free as of that very moment. What better way to kickstart a free-to-play game’s life-cycle than giving it some prime time during an E3 showcase?

Formerly known as Rainbow Six Quarantine — and rather sensibly renamed given the past 18 months — Rainbow Six Parasite is a three-player co-op shooter set several years in the future. Following an outbreak of a mutated alien parasite, you and your squad will be humanity’s last chance of survival as you face off against formidable hostile creatures and mutated humans.

We haven’t seen much of Rainbow Six Parasite at all since its initial CGI reveal trailer, but it certainly looked impressive. Given Ubisoft took the opportunity in its recent financial call to confirm that the game would release before September 30 this year, we’d expect Parasite to be the headline game of its showcase.

An in-depth gameplay walkthrough followed by an August or early September release date sounds likely to us.

It’s been too damn long since we last got to don the iconic green goggles of Sam Fisher, and following last year’s announcement that a VR Splinter Cell game was coming to Oculus, we think Ubisoft will take the time to share some gameplay or a trailer of the title currently in development to round things off.

But wait! As all hope begins to dwindle for a true Splinter Cell title, Yves tells us there’s one more thing. The trio of green lights appears on the black screen behind him, and we get a very brief teaser for a console game.

Is this wishful thinking? Yes. Is this going to happen? Probably not. Are we trying to will it into existence? Absolutely.