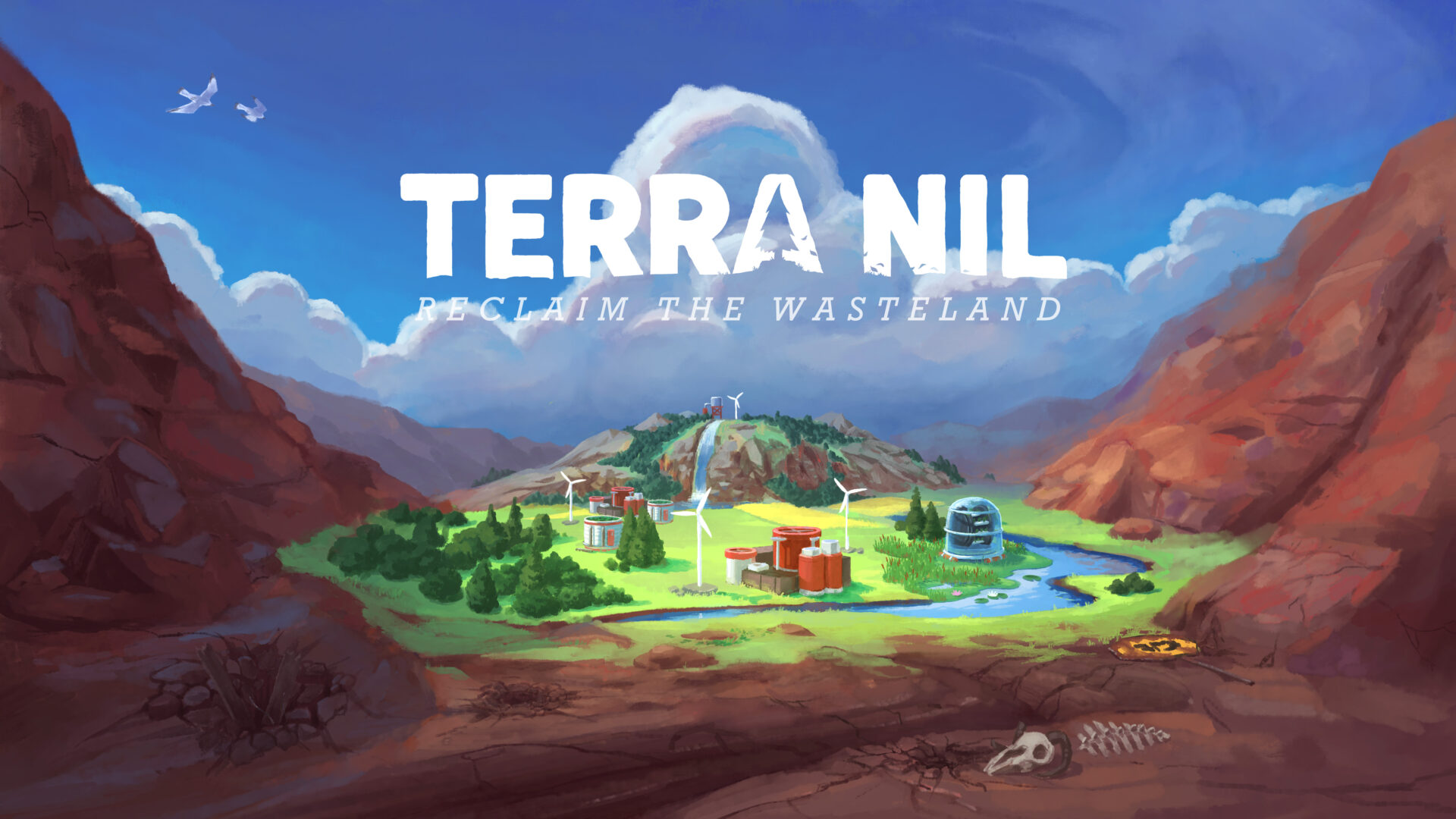 It all starts with a turbine.

Amidst hundreds of tiles that comprise a grey, lifeless wasteland, I place a turbine on a rocky outcrop. It allows me to create electricity to power toxin scrubbers to cleanse the dirt, and irrigators to cause lush green grass and shrubbery to sprout up across the tiles with a satisfying cascading animation. In Terra Nil, you’re trying to undo all the damage you’ve been contributing towards in various city building sims, and it’s one of the most satisfying I’ve played as a result.

Terra Nil is a city-building sim in reverse. You start with a scrap of wasteland and are then tasked with rejuvenating it. Each structure you build has its own requirements, which can range from placing it on water, being in close proximity to a turbine for power, or needing to be placed on a certain tile.

For the most part during this rejuvenation process, each structure you place brings an instantly satisfying change to your lifeless world. A toxin scrubber turning the soil from a dull grey-brown to a healthy dark brown, ready to be occupied by lush green grass, or the way water speeds through waterways after placing a water pump for the first time. Bringing life to this blank, depressing canvas is a ton of fun, and you’re free to experiment with excavators to create new waterways, or calcifiers to convert grassy tiles to rocks so you can place more turbines to power your green revolution.

This is just the beginning, though. Once you’ve largely covered the bleak, grey dirt tiles, you then get to work cultivating various different biomes. Each new structure enables you to convert different areas. The Hydroponium can create wetland but can only be built on irrigators near water, while beehives can create meadows of vibrant fynbos flowers when placed in coniferous trees. Arboretum’s on the other hand, need to be placed on a burnt building husk, caused by creating a controlled fire by combining the Solar Amplifier and Dessicator items.

Again, each time you create a new little biome on your environmental canvas, you get a satisfying visual change to that area. Wetlands have willows and frogs kicking back on lily pads, while the dense forests that spawn around Arboretums can even attract bears and the meadows around beehives, deer! It’s these little details that really help give you a sense of satisfaction and ‘doing good’ that feels a little lost in city-building sims given the current climate crisis we find ourselves in real life.

With some flourishing biomes, I rounded out my time in the demo by clearing up all the structures I’d built with the help of a little water-bound drone, silos to recycle my old structures, and loading bays for my drone to collect all those resources from. Once I’d hoovered everything up, there was no trace that I’d ever been there, of all the work I’d done to bring life back to a barren wasteland, and I’ve never felt more pleased for any sign of my hard work to be eradicated.

All three of these stages require you to do a fair bit of foreplanning. You want to make sure you’ve got enough riverways so the drone can get around your map to recycle your materials. Equally, you’ll want to plan where you’ll cultivate each of the different biomes in the second stage, as you don’t want to run out of space after a controlled fire accidentally goes wrong and tears through your entire field of fynbos flowers! It creates an additional challenge and looks set to offer creative players the chance to sculpt stunning wildlife paradises.

I do, however, have some questions after playing through the demo in Terra Nil; most pressingly, how the developer intends to keep mixing things up through various levels. I can see the gameplay loop becoming stale if level objectives aren’t varied enough or more structures and tiles are added to really flesh out the idea, as for now, the demo left me feeling like this was a great proof of concept without enough meat on the bones to warrant a purchase.

The game does procedurally generate each stage, providing a slightly different experience each time, and the Steam store page mentions different regions with their own unique objectives, so fingers crossed there will be more structures and environmental issues that come with them to keep players hooked for the long-run.

For now, I’m cautiously optimistic about Terra Nil’s future based on my brief experience with the demo. The core gameplay loop is incredibly satisfying, and I had a blast experimenting with the different tiles and structures in order to meet the objectives. There’s something oddly meditative about converting wasteland into a thriving ecosystem home to various biomes and wildlife. There are no time limits here, allowing you to take your time perfecting your grid of tiles, and the soothing soundtrack fits perfectly with the laidback gameplay.

A few performance issues and bugs aside — which is to be expected at this point in development — Terra Nil is shaping up to be one of the most satisfying city building sims in a long time… if you can even call it one.