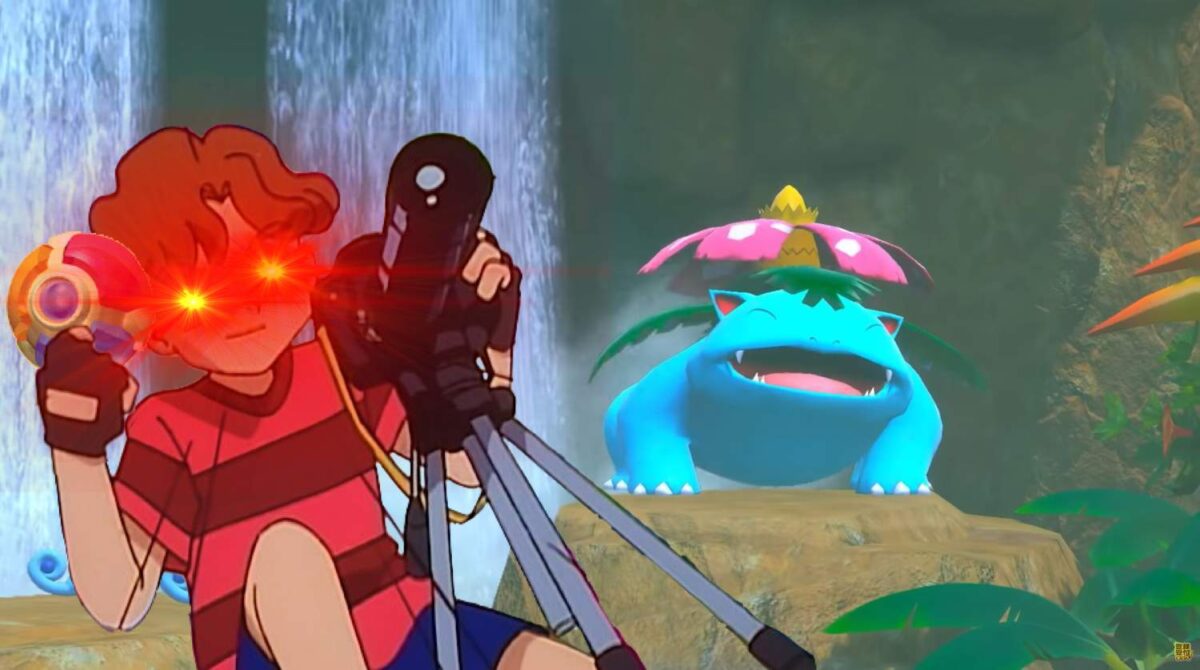 It’s been a week since we first arrived in the Lental region of New Pokemon Snap. By now, most of us will have captured gorgeous images of creatures in a tranquil environment.

We’re aided in this mission through the use of harmless, weightless apples, a scan function that captures their attention, a trendy flute to entice a merry jig, and Illuminati Balls with no physical presence beyond triggering a fluorescent light.

It’s all very pleasant, isn’t it? You might spot a Grookey curled up for a peaceful snooze, or a Tangrowth luxuriously plucking berries from a nearby branch. The resulting photo will be quite cute, no doubt, but you know what it won’t be?

I refer you now to the OG Pokemon Snap of 1999, and the horrific affairs that unfolded. The protagonist, Todd, would stop at nothing to procure the perfect shot, treating the fragile ecosystem like his own personal playground as he proceeded to abuse, torture, and sometimes outright assault the surrounding Pokemon.

He armed himself with an endless supply of Pester Balls; a weapon created with the sole purpose of injuring its target, and it allowed him to assert his dominance over Mother Nature. Those smartass Charmanders that keep snarling at you to try to frighten you off their turf? They’re not so tough once they receive a face full of toxic gas, collapsing in a breathless panic.

You’d think that Professor Oak would be mortified by this turn of events, being a world-renowned researcher and all, but you’d be damned wrong — he’s really quite thrilled with the outcome.

“Oh, it fainted!” He muses with delight, closely considering the photo you took of a pile of dead lizards.

Never mind the fact that this is supposed to be an ecological compendium of animals in their natural habitat. As long as they’re big and centered within the frame, he’s totally down for whatever snuff film you’re trying to create here.

Alas, Pester Balls are no more, as if PETA caught wind of this and picketed outside of the Oak Laboratory until they were yanked from the market, and our closest facsimile for eliciting these responses is the humble Fluffruit.

It operates in much the same way as the apple of yesteryear, but without the satisfaction of knowing that you’ve flung a tangible consumable at a frightened fauna.

“Take it!” I shriek, pelting Torterra with as many Fluffruit as my dexterity will allow. It looks up lazily for a moment, only very mildly taking notice of my presence, before shrugging and returning to its daily routine. Meanwhile, the person sitting next to me on the bus hastily changes seats.

It’s just not the same.

Beyond the appeal of a damn good photo, the N64 Pokemon Snap rewarded you for callous behavior on occasion. Knock Magikarp into the waterfall, and an epic, vexed Gyarados will emerge. Knock Charmeleon into the pool of lava, and it’ll transform into a writhing Charizard with revenge on its mind. Knock Koffing out, and your reward will be a lilting Jigglypuff song. Knock these Jigglypuff out, and you can pretend you’re John Lithgow in Footloose, putting a stop to sinful music once and for all.

Basically, there’s a lot of benefit to knocking. You might even say it opens many doors.

New Pokemon Snap allows you to bother, but little beyond that. This feels unfathomably tame, especially since the franchise is centered around the premise of capturing animals and pitted them against one another for sport.

To be fair, this is probably for the best, as the game is intended to appeal more to the whimsy of photography than my own latent desires to attack fictional monsters. Despite this, I can’t help but feel a longing for something more. Something meaner that reminds me of the immoral recklessness of mankind. The celebration of cruelty was an allegory for humanity’s petty, self-indulgent nature.

I cast my mind back to a visit to Lombard Street in San Francisco, and a hapless motorcyclist who took one of the hairpin turns too sharply, tipping his bike over in a heap. A nearby tourist’s immediate reaction was to turn to her daughter, pointing desperately at the fallen driver, and shout out, “quick! Jamie, get the camera!”

Professor Oak would have loved it. This is an entirely true story by the way, and fear not, the only thing injured was his ego. Admittedly, I was tempted to nail him with Pester Balls, but I was unable to locate them in time.

The point here is… Actually, I think we strayed from the point several paragraphs ago.

In any case, the next time you’re taking a leisurely tour through the Ruins of Remembrance and a curious Natu crosses your path, simply take a second to imagine just how glorious it would look if it collapsed clumsily into the dirt after getting socked with a Pester Ball.