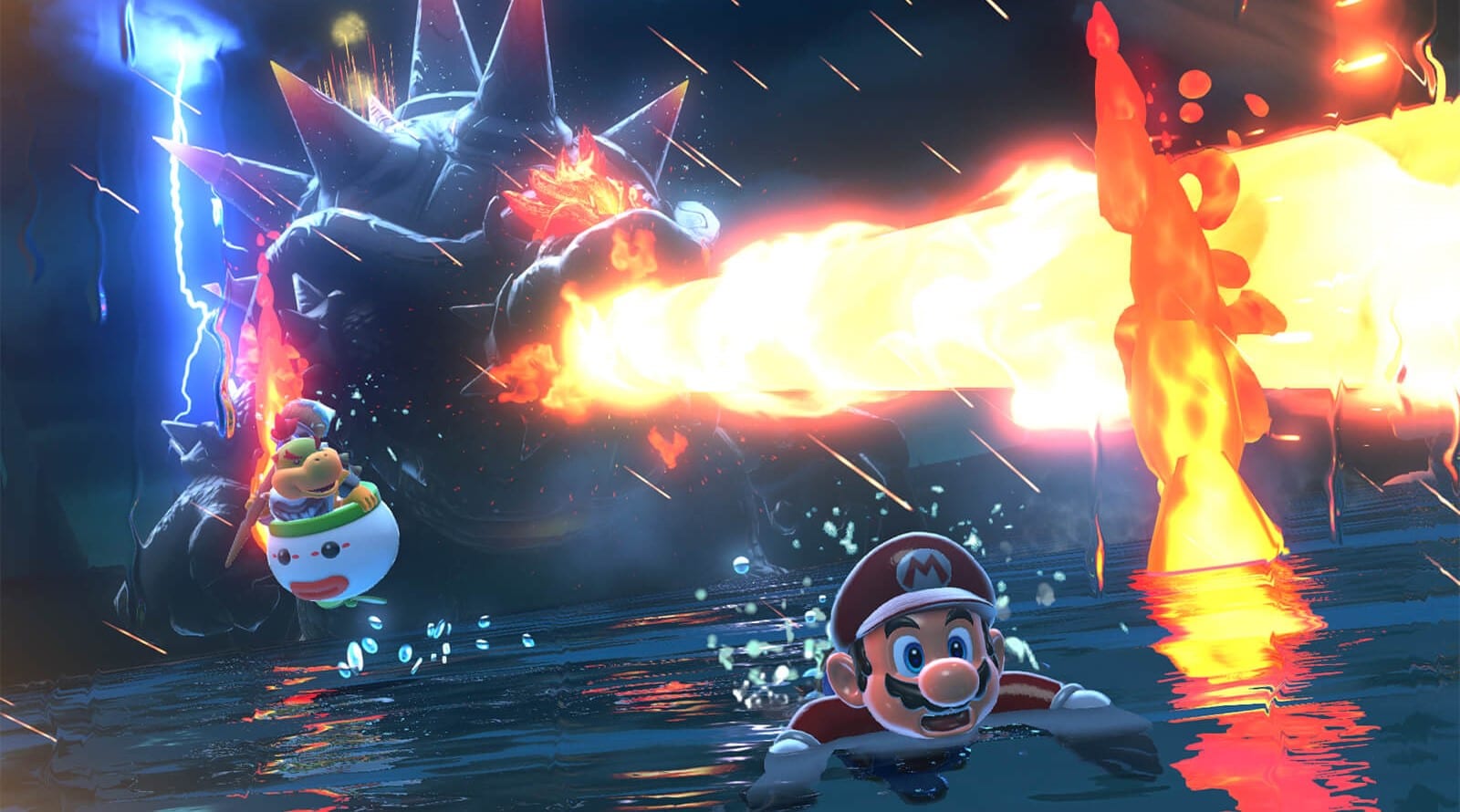 Super Mario 3D World + Bowser’s Fury is a package of two halves in many different senses of the phrase. One is a Wii U port, the other is an all-new experience. One feels very classic Mario, the other feels like an ambitious vision for the future of the series. Yet both still come with that Nintendo seal of approval we’ve come to expect from the publisher. That masterclass of minute details. The wondrous charm, euphoric orchestral score, and just some darn good plumber platforming action.

For this preview, I’m going to be focusing most of my time talking about what I’ve played thus far of Bowser’s Fury, which is to say the first chunk of the experience. Why? Well, it’s by far the most interesting aspect of this package.

As an all-new piece of content, Bowser’s Fury does away with the classic idea that an overworld should just be a hub of portals transporting you to other worlds teeming with secrets and surprises. Instead, it takes the overworld and crafts it into the real heart of the experience. In fact, it is the experience.

After opening story cutscenes, you’re immediately thrown into a sprawling water-based overworld. Ahead of me are a series of islands, each one littered with classic Mushroom Kingdom items and enemies. Goombas, flipping platforms, question mark blocks, and Piranha Plants. The overworld is now the level itself, comprised of a series of these islands, each with its own Cat Shines to be earned.

It’s reminiscent of the way we obtained Moons in Super Mario Odyssey, with enough variety from the few I’ve played to make it a real treat to go after them all. I can only talk about the opening series of islands that comprise part of Lake Lapcat, but from this alone, I’m already excited to see what the rest of Bowser’s Fury’s map has to offer and what new challenges lay in wait.

What is clear from the opening islands such as Scamper Shores or Fort Flaptrap is just how Nintendo is looking to shift the way Mario games are experienced. In Bowser’s Fury, these islands take that classic platforming fun and give players the freedom to take on what they want, when they want.

It’s similar to how Breath of the Wild managed this with its plethora of Shrines. It gives you the freedom to take on whatever challenges you do like the look of, and ignore those which you don’t, or simply didn’t discover.

Decide you want to give up on a level midway through and try and get that Shine you see in the distance? Just jump down into the water below and head on over to it. There’s a freedom to picking up and trying whatever you want that this ‘open-world’ provides that really does feel like a step in the right direction to modernizing that classic Mario gameplay, and I can’t wait to see how the whole experience pans out as a result.

It’s not just the freedom to take these on as and when you see fit, though. A lot of these islands and the overworld, in general, hide Cat Shines that require you to complete a combat challenge or use a particular Power-Up in a certain way to help you complete another objective.

In Bowser’s Fury, Power-Ups can be stacked up to a maximum of five for each, and you can freely switch between them to help you take on the tougher challenges of each island. For example, changing to Cat Mario may help you reach a Cat Shine in a quick time trial segment with shifting pillars that you’d struggle scaling otherwise. Cat Mario can claw his way up the sides, cutting off crucial seconds. Seconds that could be the difference between nabbing that Shine, or starting over.

Again, there’s some familiarity here to how Breath of the Wild gave players the various Sheikah Slate abilities to help them conquer shrines, boss battles, and the Divine Beasts. I’ve had a blast just experimenting with the different Power-Ups, figuring out which will give me the advantage I need to fully clear an island of its Cat Shines before moving onto the next.

Collect enough of these Cat Shines and you’ll eventually trigger a battle with Giga Bowser. That’s where Mario turns into Giga Cat Mario which we saw in the trailer. Alas, I can’t talk about this any further just yet, but know they’re really special.

Giga Bowser isn’t just relegated to a boss battle, though. This is an angrier Bowser than we’ve ever seen before, and his tantrums are destructive and frequent. Throughout my time on the first few islands, Giga Bowser popped-up a couple of times, bringing with him an almighty storm that battered the world I was exploring with fireballs raining down from the sky.

His fiery breath sends Goombas and other enemies to an early demise but also destroys a new type of block. These Bowser-branded blocks, once destroyed, unlock new areas or things to explore, and this in itself becomes a battle against time, as you try and retrace your steps to where you last saw some of these blocks so you can see what they hide.

These Giga Bowser cameos throughout your adventure really help to up the ante if he pops up when you’re playing through one of the islands. I am intrigued to see if Nintendo manages to come up with even more creative ways to use this mechanic to transform the gameplay experience even further. From what I have played, they’re a welcome, albeit frantic switch-up to the island-hopping gameplay.

While Bowser’s Fury has certainly been the most exciting part of this package, it would be remiss of me not to at least discuss Super Mario 3D World. Originally released on the Wii U back in 2013, the title introduces the ability to turn into Cat Mario, allowing players to pounce on enemies, attack in midair, or use their claws to scamper up walls and goal poles.

Mario isn’t alone on this 3D adventure, though. The game can be played both in local and online co-op with up to three friends, controlling Peach, Luigi and Toad respectively. Each character has their own unique abilities and playstyles, some of which are required to grab some of the level’s hidden Green Stars.

While by no means as innovative for the Mario series as Bowser’s Fury looks set to be, Super Mario 3D World offers players an opportunity for more typical 3D platforming action with frequent examples of ingenious level design throughout the first four worlds I’ve played.

When the game leans into its third dimension is when the gameplay and level design truly shines. Bouncing between the background and foreground, navigating a level with nothing more than shadowy outlines of the titular plumber, obstacles, and enemies that stand in his way. I never get tired of seeing how Nintendo takes a world’s theme and blends it with the platforming gameplay to come up with a new challenge. It’s feel-good gaming at its best.

There are so many clever little mechanics, such as the Double Cherry — which clones Mario, giving you another to control around a level and that may be required to complete certain puzzles — the moreish Captain Toad’s Adventure levels, or the marathon levels comprised of a series of 10-second segments which you need to complete in quick succession to get all the Green Stars on offer, that each gets their moment in the spotlight. However, I’ll have to save that for another time.

I’ll have more to share on both Super Mario 3D World and Bowser’s Fury closer to its official launch for the Nintendo Switch on Feb. 12, 2021.