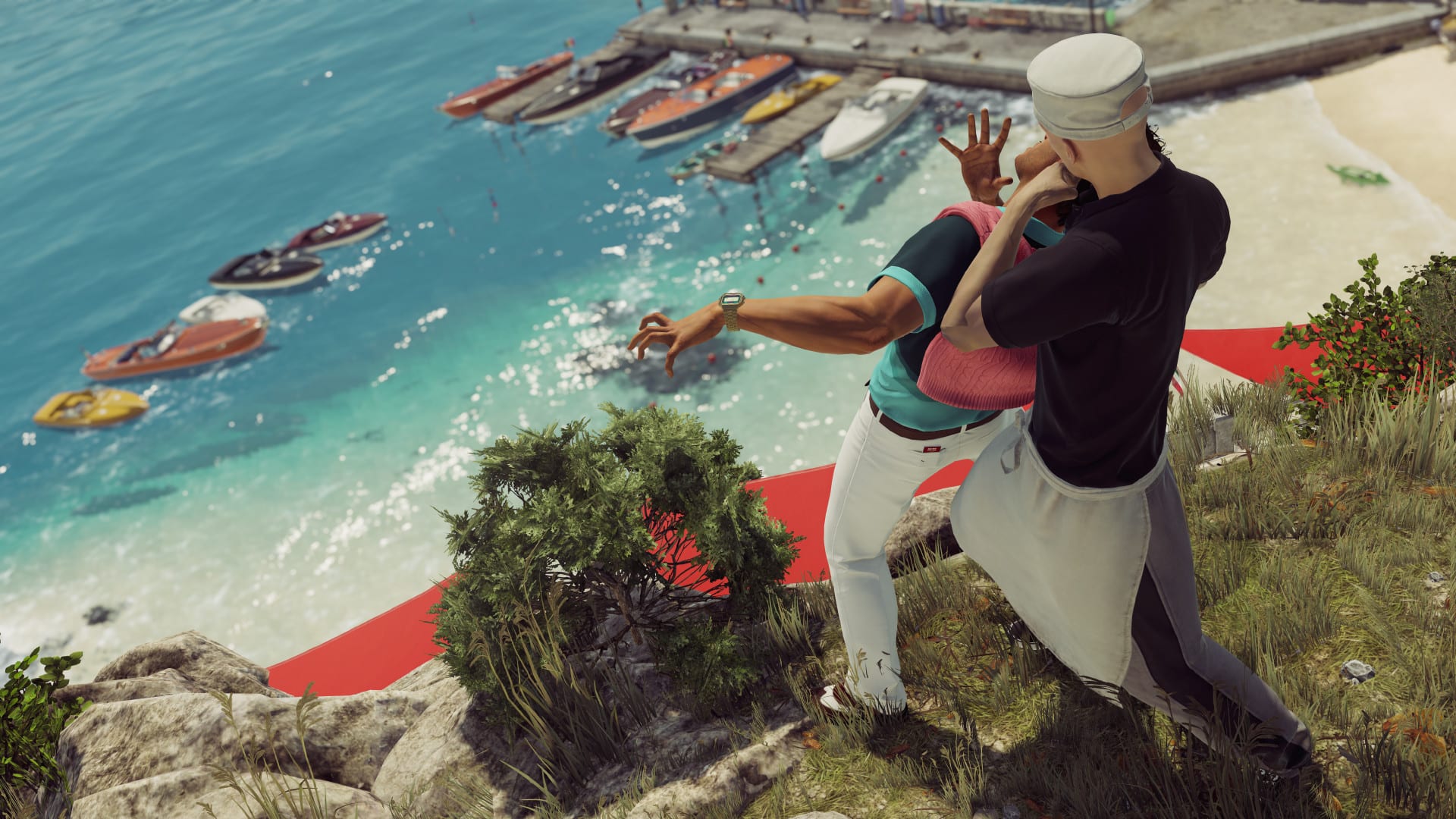 Hitman 3 has finally launched, bringing IO Interactive’s trilogy to a close. As a series, it sends Agent 47 all around the world, from New Zealand to India, and all of the locations are impressive and varied. Now that we’ve seen everything the series has to offer, we’ve ranked all of the best Hitman locations.

Hawke’s Bay isn’t a bad location, none really are in the Hitman series, but it gets marked down for being so much smaller than the others. While the extravagant house on the beach is well designed and the swirling storm changes how you approach it, you’re limited in a number of opportunities.

It’s difficult to cram over the top accidents and impressive set-pieces into such a small level, so it doesn’t really feel like a modern Hitman level, at least not next to the rest of the series.

Again, there aren’t any bad levels in IO’s Hitman series, but some fly under the radar for one of a few reasons. When it comes to the first game’s Colorado location, it’s let down by a lack of variety.

It’s almost all farmland, with you moving through barns and small building in the search for your targets. The actual story of the Colorado level is its highlight, but getting to the exciting conclusion isn’t as fun as it could be.

While Santa Fortuna is impressive in size, its two distinct areas aren’t the best — one being a little dull and the other being frustrating. Yes, taking out a murderous drug dealer with a statue of himself or his personal crocodiles is undeniably fun, the starting town area feels empty of opportunities, with sneaking into houses and waiting being your only options.

Then, in the target’s compound, the hiding places are limited and everyone there to look at you accusatorially. It’s a pain to get around, so you’ll want to get out a quickly as possible. Without the scale or variety of other house based levels, it’s a disappointing place to play.

Bangkok is another level that won’t be for everyone. Whereas some of the Hitman levels that are based in single large buildings manage to keep the variety high, the Thailand setting is a mash-up of different bland corridors.

If you enjoy slinking in the shadows and using doorways to your advantage, you’ll enjoy this level, but it’s more limited than a lot of the others in the trilogy.

Berlin is one of those levels that isn’t for everyone and the enjoyment you’ll get out of it depends on how you tend to play. It’s a level that’s generally very enclosed, so you’re limited on options for the extravagant kills, but it’s the fact that you’re searching for un-named targets.

It means you’re never really tracking the targets, so you’re just waiting for an opportunity as they walk their short path. Yes, that means you get more freedom than in most in how you kills, but the lack of missions stories and personality removes the over-the-top sensibility and structure that makes other locations shine.

Purely as a location, the Isle of Sgàil is stunning. It’s dark, mysterious, and the perfect place to use the shadows to your advantage. It’s just a little enclosed and therefore limited from a gameplay perspective.

The mission stories allow for some cheesy fun (burning your target alive in an effigy is really satisfying) but the level lacks the spectacle that others have.

You’ve got a small section of cliffs, but the rest of the level is just castle walls and a busy party, but without the variety of pathways that the like of Hitman 1’s Paris has. Exploration is key, but you’re not going to find that much that’s interesting.

While Marrakesh shares a lot of similarities with Mumbai, which we’ll get to later in this list, since you spend a lot of time wandering the crowded streets tracking your targets, it’s not quite on the same level.

The streets are teeming with guards and other NPCs to stop you in your tracks so it’s somewhat harder than other similar levels, which can make it frustrating. Hitman thrives on giving you power and letting you use that power in hilarious ways. In Marrakesh, it’s not as easy to be the all-powerful assassin you’ll want to be.

Dubai is the perfect showcase of Hitman in 2021. It’s more gorgeous and extravagant than ever with huge crowds wandering around the beautifully lit atrium.

While it is stunning at first glance, the areas behind the scenes aren’t all that interesting, limited to basic rooms and corridors. As soon as you start to hide and hunt your targets, the majesty of the settings starts to disappear, turning into a pretty run of the mill Hitman level.

Mendoza is a huge level and most of it is really open. You’re quite limited in a lot of it, since taking people out on the large, packed verandas is tough, but head away from the epicenter, and the level really blossoms.

The house overlooking the estate and the vineyard at the bottom of it couldn’t be much more different and some of the kills that are possible in both places are brilliant. The central area of the map generally becomes pointless, however, which lets the level down and makes Mendoza feel smaller than it really is.

The final mission in Agent 47’s most recent story is a wildly different one. Rather than wide-open areas full of people and pathways, it takes place on a moving train.

Rather than planning branching story kills, the tactical side of the level comes from what disguises to wear from carriage to carriage and whether to climb along the outside or hide in plain sight.

It feels like a mission from a James Bond game (potentially giving us a sneak peek at what’s to come from IO’s own 007 adventure) but the reduced freedom may not be for everyone. There’s no stalking targets or looking on from the distance; you have to create a plan from meters away and enact it within moments, which is a new challenge for the series.

Chongqing is one of the most complex and varied locations in the series. Separated by a locked door, there are essentially two different areas: the streets and the facility. Even then, the streets have a restaurant, a homeless shelter, and an experimental lab for you to explore. You can go from using a sniper to hiding in the shadows within moments.

Getting around the facility area can be a little confusing with all the keycards and locked doors around, but that only leads to some satisfying assassinations. Also, it has to be noted that the neon and rain-soaked streets of Chongqing look incredible.

Set at what is essentially an F1 race event, Hitman 2’s Miami level is a great showcase for IO’s series. The thick crowds, colorful setting, and wide variety of assassination opportunities make it stand out from the run of the mill levels.

The packed paddock contrasts the museum/factory area really well, creating a location that requires multiple different approaches and play-styles. Some areas are a little too busy, which makes it hard to infiltrate, but the mission stories lead you to some of the series’ best kills.

Although you’re in what is essentially a hospital, the Hokkaido location is arguably the most unique of the pack. With saunas, cliff faces, tranquil gardens, and bright white corridors, there are loads of ways to approach the level.

It’s also beautiful and home to some of the most ingenious kills in the series. It might lack the scale and majesty of others (unless you look out towards the cliffs) but it’s one of the best levels for simply being an assassin in.

The Parisian fashion show, the location that set IO’s series in motion, is one of the classics. The packed mansion and its ground are beautifully designed and full of opportunity. There are dark store rooms, empty private quarters, and packed parties, all of which require a different approach.

Therefore, Paris is a location that caters to every play-style. If you’re there to cause havoc, great, but you can succeed equally by playing in the shadows. It’s a more traditional Hitman level, yet its quality makes sure it stands out from the rest.

Mumbai is one of the best Hitman levels due to how well it uses its scale. It’s a huge map with a few distinct areas (slums, market, skyscraper) and it’s filled with personality. Just exploring the streets, listening to the locals go about their day to day lives is fascinating and adds something to your assassinations. You really feel like you’re infiltrating a real place.

The level also does a good job of taking advantage of the added verticality. Rather than just a crowded ground level and tight building corridors, you’re often given wide-open views of the location, allowing you to scout targets from afar. Mumbai is comfortably one of Hitman’s best levels.

Whittleton Creek is much more like the Hitman levels of old. It’s simplified in design, without losing the complexity of approach and freedom that IO’s series offers.

The quiet American suburb doesn’t surround Agent 47 in extravagant events or architecture, leaving him to hide in bushes and houses, using BBQs and gardeners to hide his presence. It’s a different tone for the series, but it works really well.

Sapienza is a classic Hitman level and often the first that comes to mind when thinking about the best moments of IO’s trilogy. From the moment Agent 47 puts down his newspaper and stands up from the bench you’re hit by the beauty of the location. I want to go on holiday there as soon as possible, as long as all the assassins are long gone!

The seafront/church area contrasts the target’s compound well and there are loads of fun ways to kill. Becoming the cheating golf instructor, pretending to be the gang’s chef, or simply pushing someone off a cliff is great fun, and it’s all made fun by the beautiful surrounding.

It also clearly inspired the sun-soaked locations that followed, such as the DLC Maldives level and Hitman 3’s Mendoza.

Shouted out by almost everyone who has played Hitman 3 as the best level yet is Dartmoor. While it’s not as showy as the likes of Dubai or Miami, taking place in a dreary but impressive English country estate, the opportunities it presents to you are absolute highlights.

The house is well designed and full of secrets, but it’s the murder mystery conceit, which is clearly inspired by the likes of Knives Out, which makes it stand out.

You can play the whole level as a detective, using your camera to look for clues and speaking to people to uncover their alibi. You can still shoot people, push them from balconies, or hide bodies in cupboards, but the overarching approach is so different from anything else in the series that it’s a special experience.