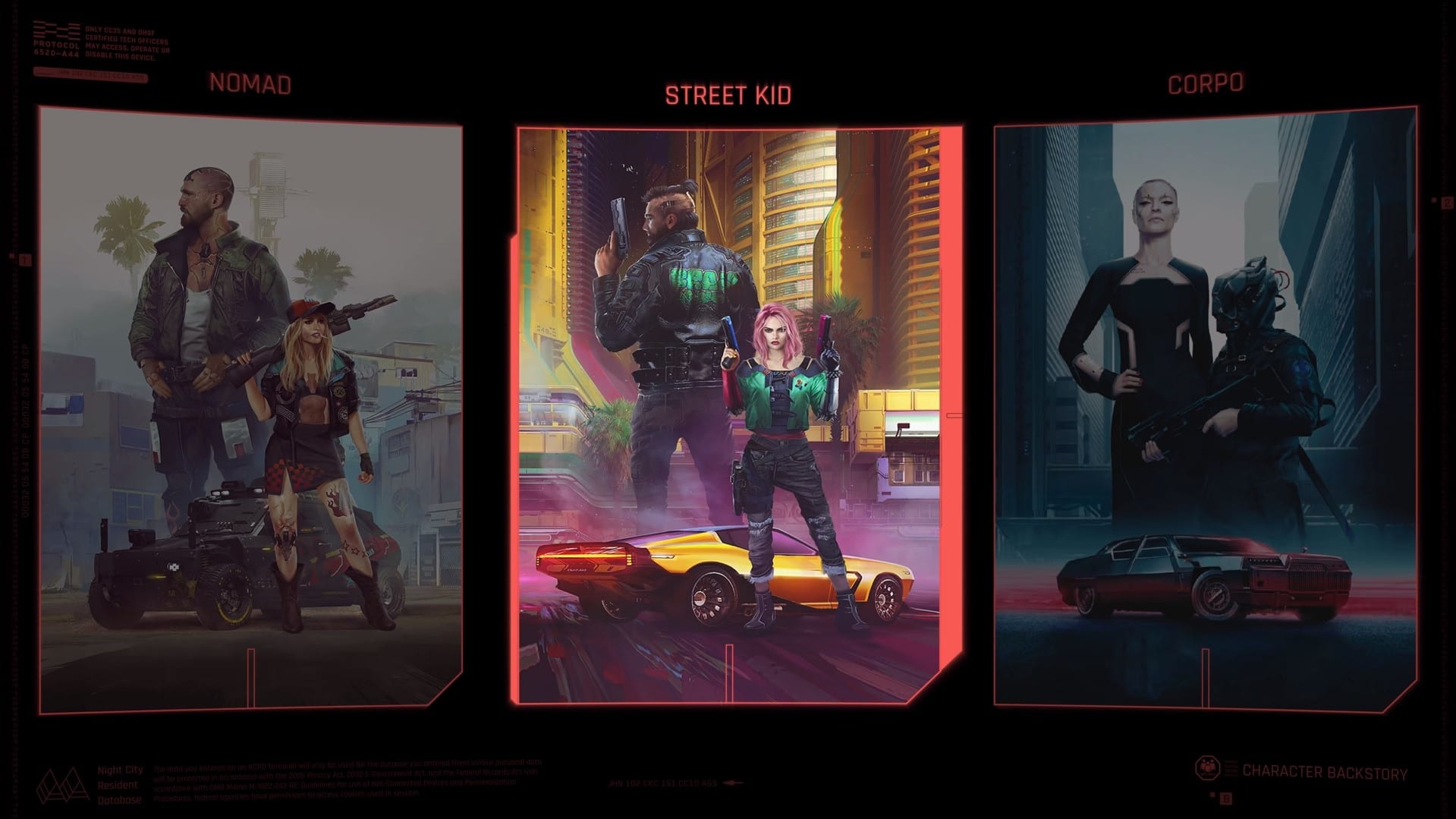 As we mentioned above, your Lifepath in Cyberpunk 2077 will ultimately play a part in how your version of V’s story will play out. The game has three different starting areas, one for each Lifepath, giving you a feel for V’s past before they all merge onto the same main storyline.

The skills and contacts that V makes from each of these Lifepaths ultimately opens up unique ways of approaching certain quests. We’ve talked more about the background of each of Cyberpunk 2077’s Lifepaths, and what opportunities these open up below.

If you choose the Street Kid Lifepath, you’ll have spent the majority of your life in Night City. You know the streets and the gangs, the slang. You know what’s going on and are in-tune with the lower-life society of the metropolis.

Having these connections to the low-lives of Night City can come in handy later on in the game, giving you different options for completing quests and advancing V’s quest for that all-important immortality chip.

Fancy being a career-driven member of the Night City public instead? Then the Corporate Lifepath is the one for you.

In this path, V will have climbed the ladder of the Arasaka Corporation (one of the weapons manufacturers in the game). The bonus of being a Corpo is that you’ll have more of a business mind when it comes to conversations with NPCs.

You’ll be able to read people, tell when they’re lying or when you’re best giving in to their demands, and you may have some acquaintances in high places that could benefit V’s quest along the way.

If you choose the Nomad Lifepath, your version of V will be a former member of a Nomad clan. This can be particularly handy, as Nomad’s consider their fellow clan members part of their family.

This makes exploring the deserts surrounding Night City — known as the Badlands — where the Nomad’s reside far safer for you to explore than if you chose the Street Kid or Corporate Lifepaths instead.

Choosing the Nomad Lifepath will have you trying to get into Night City from the Badlands for the first time, while the Street Kid and Corporate paths have you already within the city.

What Does Your Lifepath Change?

The main difference you’ll notice when playing different Lifepaths in Cyberpunk 2077 is the way in which V’s story begins.

Depending on the past you’ve chosen for V, you’ll have to go about reaching your first objective in different ways, ultimately giving you a feel for how V’s life was before they became a mercenary.

Outside of these opening sections, your Lifepath decision will largely affect dialog options you’ll have with certain characters, and will affect your relationship with NPCs.

In Night City Wire Episode 2, Cyberpunk 2077 Quest Design Coordinator Philipp Weber gave an example of how your Lifepath can affect the way you approach a quest.

He explains that when dealing with a quest that sees a Flathead robot stolen from a Corpo truck by the Maelstrom gang, a Corporate Lifepath would allow you to talk with Meredith Stout (a Corporate Agent investigating the theft) and know what she’s really about. You can read between the lines and get information that enables you to do something completely different later on with the Maelstrom gang.

A Nomad here would know more of the details about how the gang would have been able to perform the theft in the first place, allowing you to make an alliance with Meredith thanks to your valuable intel.

Street Kids in this example wouldn’t get any additional dialog options when talking with Meredith, as they haven’t had experience talking with the Corporate and upper-class citizens of Night City. Instead when talking to the Maelstrom gang, your rough and tough persona allows you to build a rapport with one of the members, finding a new one to complete the quest.

Which Cyberpunk 2077 Lifepath Should You Choose?

Ultimately, which lifepath you choose is entirely down to you. There is no right or wrong option here. Instead, you’ll simply want to choose the Lifepath that most appeals to you.

For more on Cyberpunk 2077, be sure to check out our guide wiki, or see more of our coverage below.