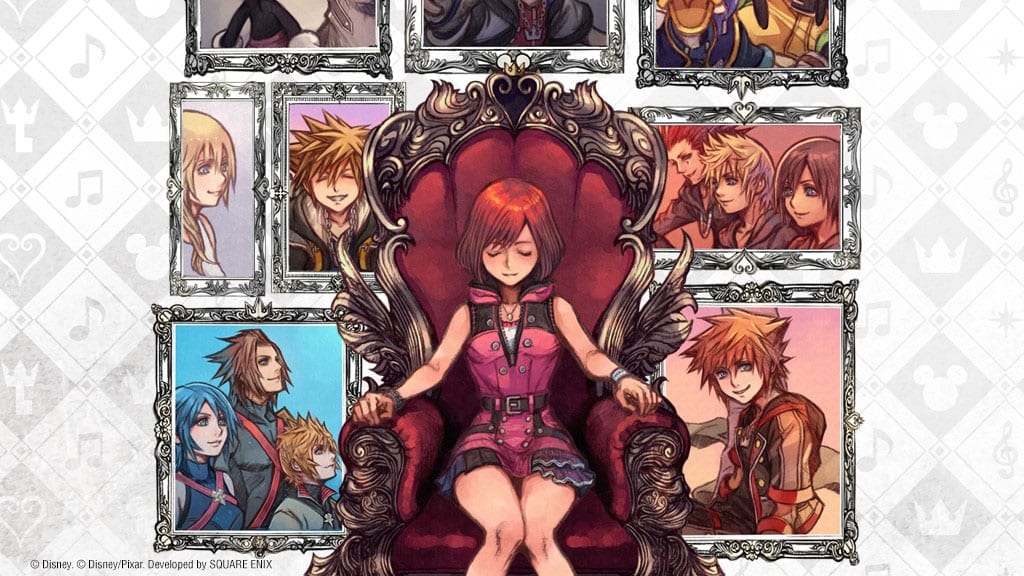 If you’re a long-time fan of the Kingdom Hearts series, then it should be no surprise to you that Kingdom Hearts: Melody of Memory is a good game.

The series has always been known in no small part for its stellar music composed by Yoko Shimomura, with literally hundreds of tracks to draw from for a potential music-based game. Not only that, but they run the gamut from soft and serene to adrenaline-pumping, providing the perfect amount of variety to keep fans of the series and music-based games glued to their screens.

It was only a matter of time, then until something like Melody of Memory released, and while it may be rough around the edges in places, it’s still exactly what fans of the series would want in a title exploring a new genre.

Being that it’s a Kingdom Hearts game though, the title does tie into the wider series with a small amount of story content.

Serving as a recap of sorts of every game up to this point, the gameplay is framed as Kairi searching through her memories in order to find clues as to Sora’s whereabouts following Kingdom Hearts 3.

In the deepest reaches of her memory, there may very well be a clue as to where he’s gone; and, better yet, how to reach him.

While this new story content offers a big hint as to what’s next for the series, it’s pretty insubstantial overall and shouldn’t be what players expect to see the most of while playing the game.

Instead, they should be prepared for a heartfelt, nostalgic look back at the series through its music. This is, after all, Kingdom Hearts’ first rhythm game, and it features tracks from throughout the series’ history to celebrate the occasion.

Iconic tracks like “Simple and Clean,” Hollow Bastion’s “Scherzo Di Notte” theme, and Twilight Town’s “Lazy Afternoons” are all featured for players to make their way through, unlocking new collectibles and more of the 143 tracks included in the game as they do.

How this is done is pretty cool too. Through a World Tour mode, Kingdom Hearts: Melody of Memory players can play through different tracks from the series in the order of the game’s releases.

Starting with tracks from the first Kingdom Hearts, they’ll be tasked with making their way through Final Fantasy Theatrhythm-esque gameplay segments for each song.

Stages in turn can then play out in one of three ways. The first is Field Battles. Portrayed as a three-person battle reminiscent of a mainline title, players will need to defeat Heartless by executing specific button presses in time with the music, with higher difficulties requiring more button presses.

Nailing a button press at exactly the right time will earn a better rating and more points. A higher final point total earns players a better final grade and better rewards, ranging from items to help them survive tougher songs or Stars that can be used to unlock new tracks in World Tour mode.

It’s pretty standard for a rhythm game but works well all the same. Fans will find plenty of fun to be had in unlocking every track, completing their favorite songs on higher difficulties and otherwise seeing some of their favorite worlds shown off in a new way.

Speaking of which: While it does go for the older graphical style of the series, Melody of Memory isn’t without visual bells and whistles to make the game a joy to look at while playing.

Magic spells explode into showers of sparks and particles, while stages will burst with light when notes are nailed with perfect timing. Heartless move and behave with the same personality as they do in mainline games, and cutscenes that play out in the background of certain scenes are as stunning as ever.

However, this can also prove to be a double-edged feature. With so much going on visually at any given time, it can be easy to get distracted and miss notes or incoming enemies. There are even times when the visuals will hide a note or several notes until the last second, leading to frustrating misses that can force players to start over if they’re trying to clear a specific challenge.

Overall though, Kingdom Hearts: Melody of Memory is exactly what it needs to be: A quality rhythm game experience that lets fans of the series look back on it fondly. Its flaws are minor, and its strengths lay the groundwork for a promising future of bigger and better spin-off titles in the genre.

It’s a great first step into the genre and will keep fans of Kingdom Hearts and rhythm games alike engrossed in its different modes for hours on end.