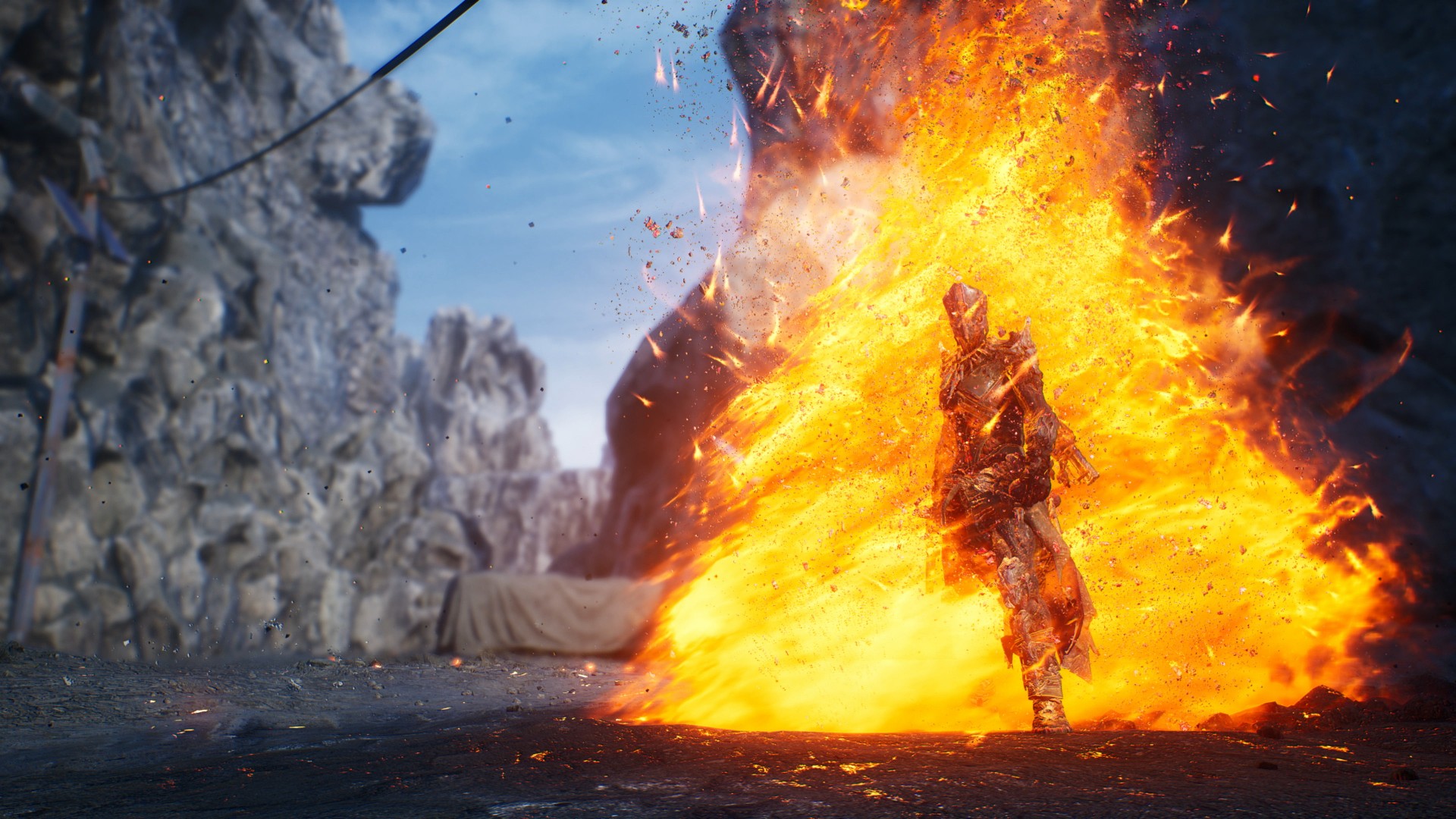 Today the team behind Outriders, People Can Fly, has shared their second broadcast showing off more gameplay of the anticipated looter-shooter. In addition, the team was also able to answer a few questions that Twinfinite had about the latest broadcast. Let’s get into all of it.

Outriders will begin near human settlements that are trying to survive, but eventually the story will break out of that area and will move to more diverse lands that are deep into the unexplored areas of the planet of Ennoch to try and find the source of the mysterious signal that is driving the plot of the game.

According to the developers, the environment of each region is going to be key to learning a lot about Ennoch’s history, story, lore and the overall development of the human colonies and outposts. Unfortunately, they weren’t able to say much more than that, but stressed that as we penetrate into new areas, things will certainly change.

Most areas will have some kind of hub, and then a free-roam area. Some of the area you explore will eventually be covered by the main story, but there are also areas that you wouldn’t normally traverse unless you took on side-quests. You can take side quests on right away, or go back to them later for scaled rewards.

The broadcast also tackled the question of how many hours it would take to complete Outriders. The presenter estimated that if you plow straight through the main story it would take you about 25-30 hours, but if you take your time to explore and do side quests, it could take about two or three times that.

The presentation showed off a new feature: the game’s mobile hub. Hubs are basically towns, and you’ll come across them from time to time, but you’ll also travel Ennoch in a large truck that can be coverted into a hub.

NPCs will travel with you and will serve as not only important vendors, but characters in the story as well.

The developers noted that it was common place to not have your character speak in multiplayer games. They mentioned that they didn’t like that and then stressed the importance of having a “personalized character.”

The backstory of the main outrider – and many of the other characters in the game – is that they are all shady mercenary types. The developers noted that “He’s not a very talkative person… [laughs] but still he has his personality, he’s commenting on the world, he’s sarcastic.”

In fact, the developers told Twinfinite that players can combine their hubs to create a big convoy of sorts.

Another feature that was teased was optional Monster Hunts. However, they were not ready to discuss them in detail at this time. I’ll go out on a limb though and assume it involves tracking down and killing some big and/or dangerous monster.

Finally, the broadcast also revealed that they would be working with Inon Zur on composing the game’s score and offered a behind the scenes look at some of his work on Outriders. Definitely check out the broadcast for yourself if you’re interested in taking a look.

Although shown off plenty of times now, the Outriders broadcast properly broke down the Pyromancer class.

The Pryomancer is designed to be a mid-range, crowd-control specialist. They have the ability to stop groups of enemies in their tracks in order to set them for a big area of effect (AoE) fire attacks. In addition, they can stun enemies and leave a burning damage over time (DoT) effect with some of their fire-based attacks.

Many of the Pyromancer’s skills are designed to be chained together. The broadcast showed an example of a player using Heat Wave to set a large group of enemies on fire and then Overheat to blow them all up. Or also using Overheat to ensure that an enemy inflicted with Thermal Bomb blows up while the effect is active. Ash Blast can also be used to easily line up a Heat Wave.

The key for surviving as a Pyromancer is to use your abilities to get kills as they receive large bursts of healing whenever they defeat an enemy with their abilities.

Like the Trickster, the Pyromancer will have three skill trees to choose from.

After learning all this information about the Pyromancer I was curious as to whether or not the Pyromancer would struggle against tough single-target enemies, since its skills seemed designed around crowd-control.

The developers made it clear that some classes may struggle in certain scenarios and that it would be up to players to fine-tune their character builds to excel depending on the situation as a character will not be able to shine in every possible combat scenario.

For example, if you’re going to build a true tank, you’re going to have to sacrifice something like damage. So some scenarios will be harder than others depending on your build.

That said, the developers are eager to see if fans can outsmart them, try and break the game and create the build that’s best at lots of different things.

They also said though that Outriders will be monitored after launch and as long as people are enjoying the game still, they will keep an eye on things and make balance changes if necessary.

Finally the broadcast wrapped up with a Q&A with questions submitted by fans over social media and I was also to sneak in a few random questions of my own. Here are the highlights that we haven’t already gone over.

That’s the highlights from today’s broadcast and our recent interview. Definitely check out the full video if you want to see all the details we discussed here for yourself, and stay tuned over the coming months for more information on Outriders as it approaches its release date sometime this year.

Outriders will release on PS4, PS5, Xbox One, Xbox Series X, and PC. If you missed the last broadcast and want to learn more about the other featured class, the Trickster, you can check that out here.