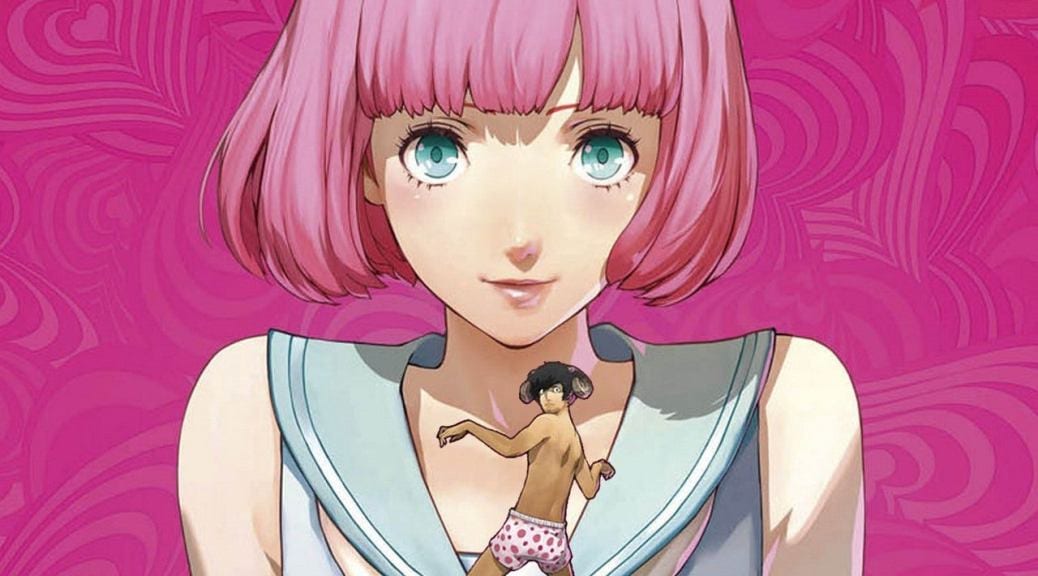 Catherine Full Body is probably one of the last games you should play in public – as the scantily clad women vying for Vincent’s attention may turn some heads. With that said, it’s still hard to pass up getting to play an Atlus game on the go, especially on the Nintendo Switch.

If you’ve already played the game on other consoles or PC, don’t expect much different from the Switch version of Catherine Full Body. The plot still follows doting bachelor Vincent Brooks as he struggles to commit to his long time girlfriend, Katherine, after she brings up marriage.

To make matters worse, Vincent cheats on Katherine with another woman, Catherine, the night after marriage is brought up. Oh, and there are also the nightmares, where he must solve block puzzles in order to ascend a tower, with failure resulting in death in real life.

With each level Vincent rises through the tower, new obstacles and gameplay mechanics are introduced to help spice up traversal. Certain blocks disappear after stepping on them, where others will kill you the instant he crosses over them.

To survive each level, Vincent needs to take advantage of the numerous power-ups strewn throughout the blocks that make up each area. Give him a bit more footing with a White Cube or use an Energy Drink to skip blocks, and he may just last another day in this nightmare.

This gameplay is a blast to work through, as it results in a lot of trial and error to overcome the obstacles. The only issue with the controls that is a little frustrating for this port, in particular, revolves around the Joy Cons.

I found myself moving Vincent multiple blocks more than once when climbing the cubes due to the sensitivity of the Joy Con’s thumbsticks. While it wasn’t game-breaking, it did alter how well a did on some levels.

The end of each section also features important questions that affect the path you’ll wind up on in the main story. These morality questions combine with the daytime decisions Vincent makes when he roams around the Stranded Sheep bar.

Stranded Sheep is my favorite area in the game, as Vincent is allowed to move freely, making conversation and executing (or ignore) actions that lead to plot-based consequences. Whether it is talking to the boys, putting on the x-ray glasses, or chatting it up with the third possible love interest, Rin, I loved the conversations and diverging paths that the area lets you sort through.

Like we mentioned in our PS4 review of Catherine Full Body, though, Rin’s inclusion in the game is still forced. Her character either takes away from the previous two love interests or disappears from the screen altogether quickly depending on your choices.

With that said, the amount of choices and branching paths in Catherine Full Body are worth exploring. Catherine, Katherine, and Rin all boast unique personalities, with each interaction they have with Vincent resulting in exciting dynamics.

If you’re a Nintendo fan that’s been dying to give this one a shot, then put on your big boy undies and give Catherine Fully Body on the Switch a try.