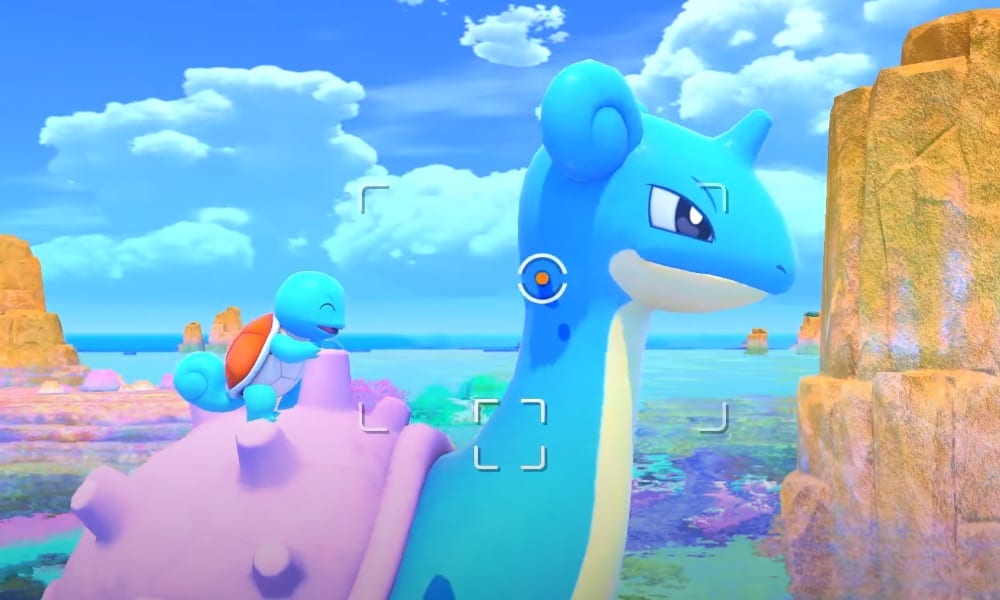 21 long years have gone by since Pokemon Snap released on the Nintendo 64, and just as everyone was starting to lose hope that there would never be a sequel, it finally happened: a new Pokemon Snap game was announced for the Switch.

We only got about a minute-long trailer showing what the new game will look like, and after seeing the “under construction” sign at the end, it seems as though it will be some time before we will have the game in our hands.

New Pokemon Snap has some big shoes to fill. The original game was simple in nature but somehow still struck gold in its mechanics and hidden secrets.

Since two decades have passed, the sky is the limit for what the sequel might include. Here are six wishes for New Pokemon Snap that we hope come true.

In the original Pokemon Snap, there were three main items that you could unlock to interact with the Pokemon in the world: apples, Pester Balls, and the Poke Flute.

Apples and Pester Balls were used to coax Pokemon out of hiding spots, and the Poke Flute was used to awaken a sleeping Pokemon and make it dance. We already saw apples in the trailer, and it wouldn’t be surprising to see the other two items return in the new game.

Ideally, New Pokemon Snap would have a number of brand new items that could be used to interact with Pokemon to take the best possible snapshots.

Many types of berries could be added that would have various effects on how a Pokemon acted. Honey could be used to attract Bug-type Pokemon. Maybe there could be a new item to make quick-moving Pokemon slow down or toys for Pokemon to interact with each other.

New items to let us take interesting snapshots would be a welcome and expected addition.

Pokemon Snap is an on-rails game, meaning the Zero-One vehicle travels along the set path. A lot of fans wanted a sequel to allow the ability to travel freely on foot, but to me, that wouldn’t be a Snap game.

A good compromise, though, would be if the game gives you multiple branching paths you can take on the rails on each course.

In the first game, this wasn’t possible. The only thing close was that you could make an Electrode explode to open the path to a new course. However, there wasn’t a way to take multiple paths within the same course.

Branching paths would be a great new feature because it would add replayability to each course. For example, perhaps you could take a left turn instead of a right turn in certain parts of the courses to go into a different where new Pokemon can be found.

In the first Snap game, all of the Pokemon followed scripted movements. This means that every single time you play a course, Pokemon will appear in the exact same spots and generally move the exact same way.

On one hand, the predictability of this is nice: if you’re after the perfect shot of Meowth, you know exactly when and where it will appear. On the other hand, some unpredictability would add to the challenge of getting a high scoring shot.

This would also add to the replayability of each course. Maybe on the first attempt, an Eevee is sleeping on a rock, but on the next attempt, it is drinking water from a pond. If the Pokemon have the ability to roam and appear in different spots, it would invite the player to retry a course several times.

The main goal of Pokemon Snap is to take high-scoring pictures, and with enough points, unlock new areas. New Pokemon Snap could go the extra mile and add new types of challenges to complete.

Maybe the professor could instruct you to take specific photos, like a Rockruff chasing a Butterfree. Maybe there could be a task to take only photos of Water-type Pokemon on a course, and if there are any other types in a shot, you would fail the challenge.

The possibilities for different photo challenges are endless, and these would be a great way to spice up the gameplay.

Gaming has advanced quite a lot in the past 21 years, so I fully expect grand things from New Pokemon Snap. The first game had only six courses and 63 Pokemon. Of course, we can expect the sequel to expand on those numbers, but there’s another thing they can do within the courses themselves.

This would be the addition of changing weather within each course. How great would it be if every time you started a course, there was a chance of different types of weather each time?

Perhaps rain could bring out more Water-type Pokemon, an intense sun would make more Fire-type Pokemon appear, and snow would invite Ice-type Pokemon to come out into the open.

Again, maybe I’m being repetitive by talking about replayability, but this would add incentive to retry courses for the possibility of encountering new creatures. It would also make the world feel more realistic. Throw in day and night cycles for even more possibilities.

In the first Pokemon Snap, we played as a boy named Todd Snap who volunteered to help Professor Oak with his research by taking photos of Pokemon on the island.

In the trailer, we see a quick glimpse of the playable character, but it’s unclear whether this is Todd or not. Could Todd possibly be a professor or researcher himself now?

It would make the game so much more personal if we could customize our own playable character in New Pokemon Snap. We don’t see our own character too much while out taking photographs on the courses, but we’d be able to see him or her when giving the photos we took for the report.

They could go all out with this, such as letting us buy clothes and cosmetic camera or vehicle upgrades with the points we earn from taking great photos. Any type of customization to make it feel like we are the ones going on the journey would be a welcome addition to the game.