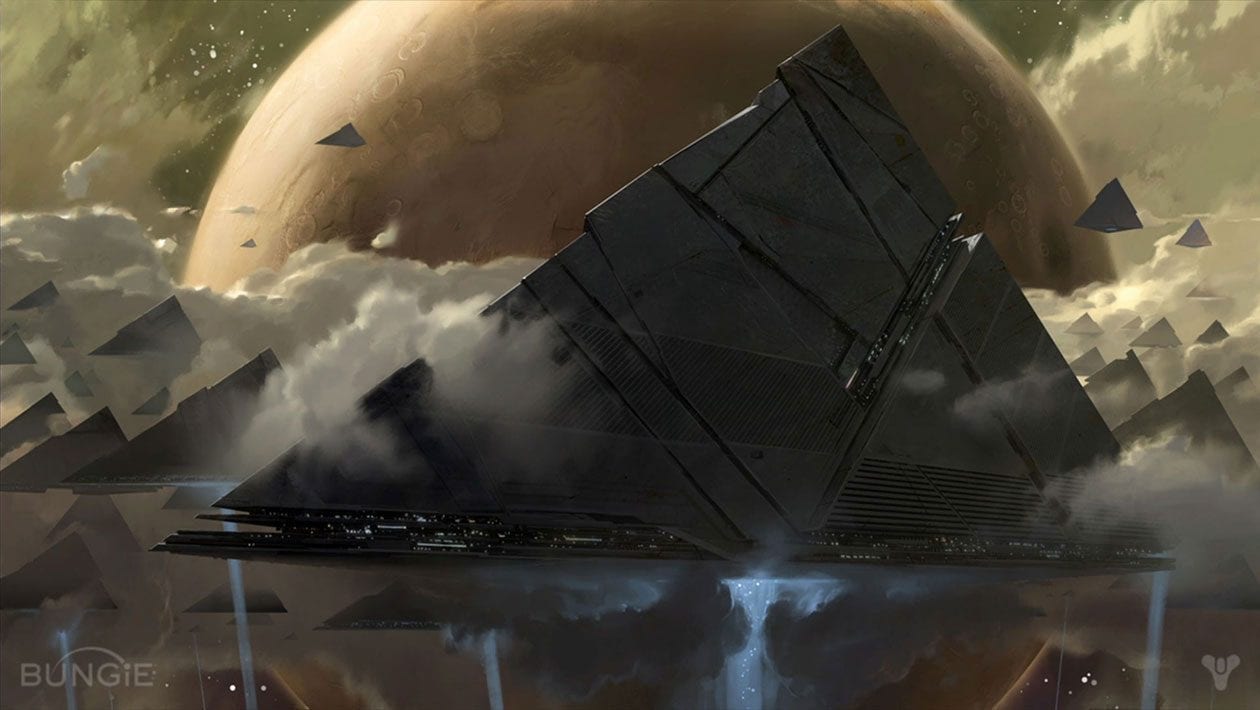 In yesterday’s TWAB, Bungie revealed that news regarding Year 4 of Destiny 2 is coming very soon. Normally I wouldn’t be getting so antsy, but the pyramid ships are pretty much already here, and I had always assumed that would be the focus of the Year 4 storyline.

The problem with that theory is that there’s a whole season in between now and Year 4. So what’s the deal then?

Well the next season starts on June 12 no one knows except for Bungie, – doesn’t make sense but that’s not going to stop me from trying to piece it together anyway. There’s a lot of different directions Bungie could go here, but here’s what makes the most sense.

Next Season: The Darkness Puts Us On the Defensive

At the start of Season of the Worthy, I really didn’t think we would see the arrival of the Darkness by the end of it. I assumed there would be one more season, possibly themed around the Fallen and the House of Light (more on that in a bit). We would unite the Fallen around Mithrax just in time to help us fight the Darkness.

Well, that theory appears to be out. Maybe Mithrax and the House of Light are still on the menu next season, but I find it hard to believe that we’d take any sort of break from fighting the Darkness head on if they are actually here and attacking.

So I expect the Darkness to make first contact next season. My instinct tells me that the next season will take place on Titan, since it’s probably received the least love of any location in Destiny 2, but then again, the pyramid ships are already at Jupiter and Titan is a moon of Saturn, which is further away.

Still that doesn’t mean we still couldn’t do stuff on Titan, and I imagine that’s where we’ll first fight the Darkness, or at least lots of nightmares if there isn’t a new enemy faction to fight.

I’m going to buy into this popular rumor. To make space for Europa or wherever we’re going to go in Year 4, Bungie ends Year 3 with a bang and actually has the Darkness destroy Titan.

It’s where the first collapse got going the first time around, and I can see Bungie coming full circle with it and having that be the catalyst once again to kick off our war with the Darkness.

Year 4: Taking the Fight to the Darkness

Fine, so if Bungie is insistent on having the Darkness arrive in this next season, Year 4 must be when we turn the tide, stop the bleeding, and start pushing the Darkness back, or possibly even defeat it.

While it’s safe to say the Darkness will be heavily involved in Year 4 – I’m not really going out on a limb there – trying to figure out to what extent is pure speculation. Your guess is as good as mine.

Personally, I’m thinking this is like a Negan/The Walking Dead kind of moment. The Darkness is going to show up in Destiny 2 and be a major part of the story for the foreseeable future. I don’t see it wrapping up within the confines of the vanilla Year 4 expansion pack. By the end of Year 4 though? That’s possible, but I wouldn’t bet on it.

Teaming Up With the House of Light

I do foresee this intriguing story thread finally being pulled at. There have been so many hints towards a revisiting of Siva, Eramis, House of Judgment and just the Fallen in general over the last few seasons in various lore tabs. Not to mention they are kind of just “due.”

It’s just time for them to be involved in the plot again somehow and having this civil war that involves the three main players (Mithrax, Variks, and Erami) take place seems like the most obvious way for that to happen. I restructured this, just double check it still make sense from a Destiny perspective

It would be a worthwhile diversion for a season if Bungie wanted to give us a break from fighting the Darkness directly, if the goal is to get a faction of Fallen on our side to help us in the war.

Year 4+: Calus or Savathun or Uldren Finally, Maybe Do Something

The late game of the war against the Darkness probably will involve at least one, if not all of these people. I’d say Savathun is the least likely to show up, as Bungie might want to save her to be the big bad villain when the Darkness storyline finally comes to a close, but yeah, I’d bet good money on the other two finally showing up.

Calus has to show up right? What else would bring Calus into the fold if not the Darkness? Calus is obsessed with the Darkness, and his lavish lifestyle if fueled in part because he believes the Darkness will win and he wants to unite everyone (or whoever is left after stamping out any resistance) under his rule and just enjoy our last years, months, or even days that we have left in luxury. This bit is confusing – it might be the “his lavish lifestyle if…”

As for Uldren, I truly have no idea what his deal is. He just appears to be wandering around aimlessly trying to figure out why everyone hates him. The only reason I bring him up is because Mara is likely to reappear in some significant way in this Darkness saga and that will probably loop the Uldren thread back into the main story fold as well.

How did I do? Like my predictions or am I totally off? Let me know in the comments below.