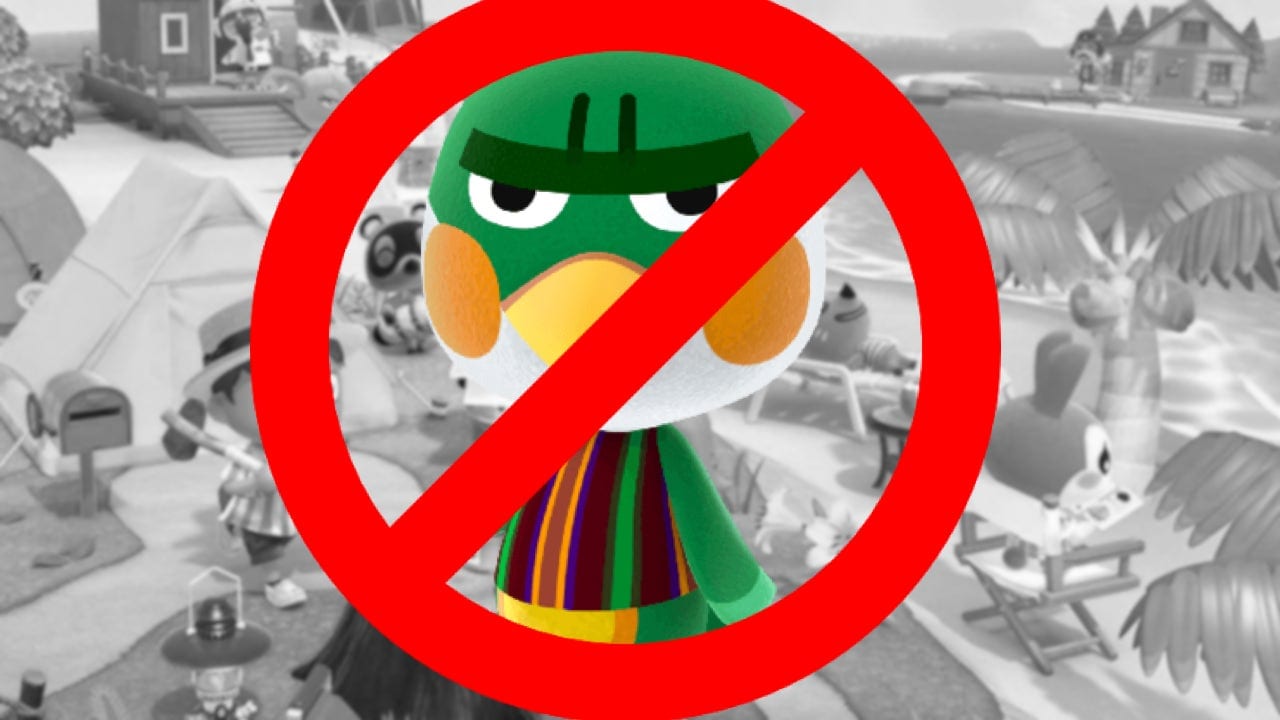 The time had come.

After being at odds with Admiral for a solid month, I had finally decided that enough was enough. I needed to evict this miserable son of a bitch from my Animal Crossing: New Horizons island, once and for all.

His standoffish tone proved grating from the day he first set foot on Bootyland, and his mere presence had turned my once peaceful morning constitutional into a stressful chore.

“Aye aye”, he’d spout at the end of his sentences — a condescending jibe at my dutiful nature in an effort to undermine everything I had set out to do. I was trying to make this deserted island a home for us, but no matter what I tried, it was never good enough.

So I resolved to dedicate myself to the most thankless endeavor in all of Animal Crossing: getting a villager evicted.

The method to do this has never been made exactly clear, and there’s a lot of misinformation out there. The general assumption is that if you complain enough to Isabelle, in addition to assaulting the unwanted resident with your net on occasion, they would eventually grow tired of your shenanigans and bail out.

Alas, this was having no effect. Admiral seemed as content as ever, plonking himself down on the bench I had lovingly crafted as he sneered at me from afar.

Maybe he was actually a closeted masochist, and all of this negative reinforcement was the highlight of his day?

“Hit me, daddy…” he would snarl under his breath as he absorbed another blow. “Each concussion brings me closer to nirvana!”

So, I had to take drastic measures, and I did a deeper dive into what actually makes an Animal Crossing villager tick. Apparently, the trick is to completely cease any interaction with them whatsoever, leaving them to suffer in isolation while you lavish attention on everyone else.

Of course! It was so obvious now. Admiral needed to see that my animosity was not veiled affection. He had to endure the torturous agony of solitude.

So I changed things up, and simply ignored the frowning bird as I went about my day. I’d stop and have a wonderful chat with Apple, catch a centipede as a gift to Rex, shamelessly flirt with Skye beneath the peach tree — whatever it took!

All the while, Admiral would hover nearby, wondering to himself when it was his turn for gossip, or presents, or the unpleasant experience of my awkward advances.

It seemed to be working, as I noted him gradually losing faith. More than once, I spotted him from the corner of my eye, sitting alone on the beach and staring off towards the distance.

That’s right, Admiral. Your true home awaits somewhere beyond those waves. Don’t let us hold you back!

Then one day, I noticed it. The detestable miser was pondering to himself. He was never much of a thinker, of course, so this struck me as unique, and something worth investigating.

After a week of pure neglect, his voice was eerily unfamiliar. Hollow, resigned. As if my presence had been the only thing keeping him going.

“My treasured rival…” he muttered, tears welling in his eyes. “The world has lost all meaning. I feel adrift on an endless stream of mediocrity. My favorite tastes have become bland, scents have turned stale and unappealing. The things I had so callously taken for granted, I fear, have escaped me forevermore.

“Now, I turn my eyes towards the next chapter, old friend. It feels as though I’m skipping ahead in the story before I’ve read all of the pages, because I wasn’t finished with them, not really. But life doesn’t wait for you to take in those moments at your leisure. It happens when it happens. And for me, it’s happening now.

“In these darkest of times, I have realized just how much you meant to me. I’ll hold that with me, clutched tightly to my breast; the last ally that remains as I set forth and withdraw from this place forevermore.

“Farewell, my brother, my familiar, and dare I say… my one true love.”

I’m probably paraphrasing a little bit. The point is, Admiral was ready to set sail at long last, and he was just awaiting my approval.

Isn’t that what he had been doing this whole time?

Relegated to the shadows, estranged from society because I had willed it to be so? The other villagers certainly hadn’t been paying Admiral any mind in my absence, like sheep they had followed my lead and kept him at arm’s length.

Especially Vesta. She was the biggest sheep of them all.

Suddenly, I felt a pang of guilt gnawing away at my insides. Admiral wasn’t leaving because he was enraged, or bored of the island lifestyle. He wanted to depart because he felt empty. And it was all my fault.

It wasn’t too late, however. There was still one last opportunity to alter the course of history, and assure Admiral that he was in fact wanted here in Bootyland. To validate him as a significant member of our community, to be welcomed back with open arms…

And so, I told him to leave, as soon as humanly/birdly possible.

What? You think I’d have a change of heart because the stupid fictional video game character got sad? Screw that, I’m trying to make room for Erik to move in. Bootyland has no room for quitters, dammit!

Now to sell his punk ass on the black market…