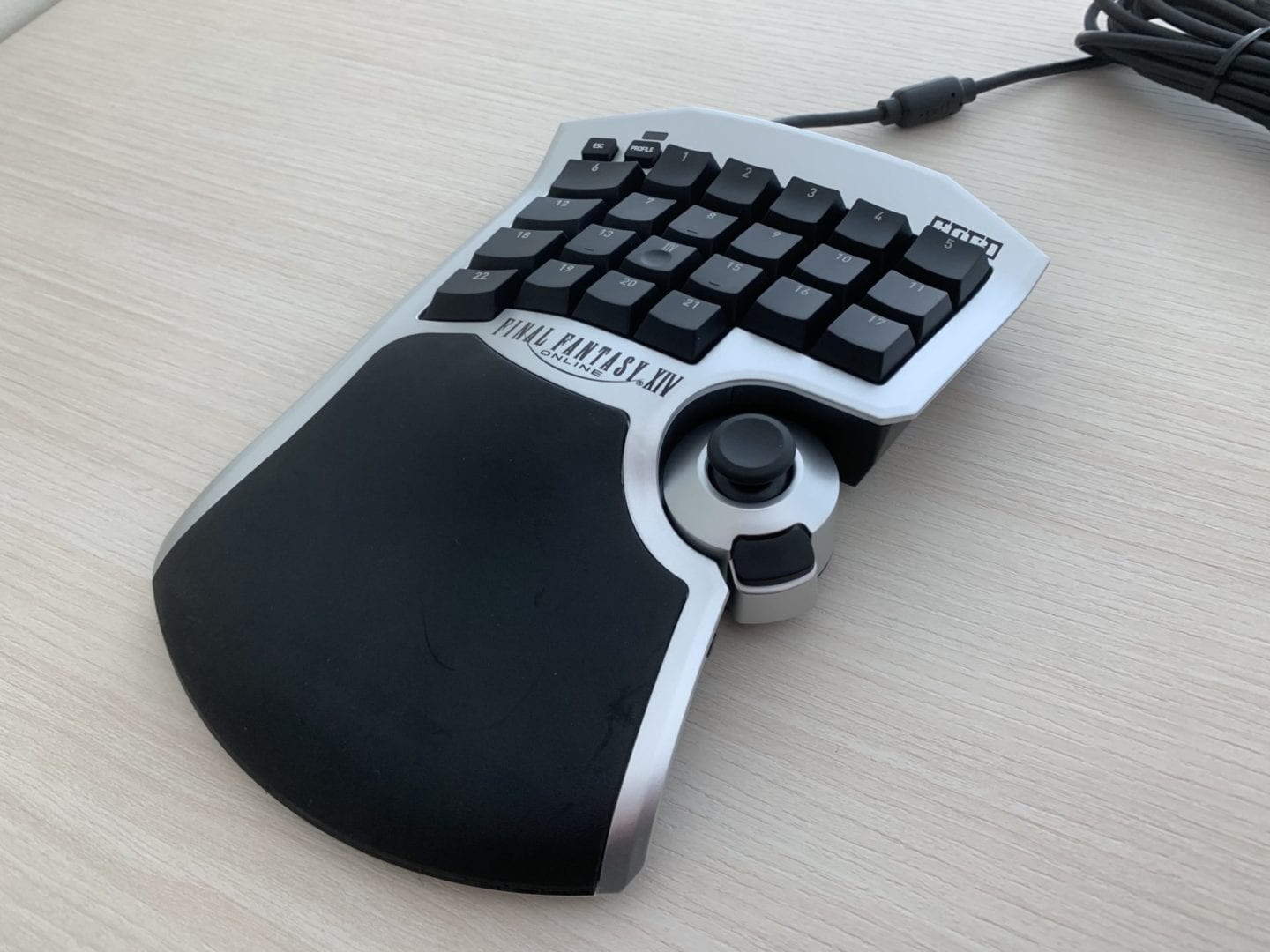 I’ve been playing Final Fantasy XIV on PC for about five years at this point, hopping in after the Heavensward expansion dropped, and being completely hooked on it ever since. Throughout my five year tenure, I’ve played this game exclusively with a mouse and keyboard, and have never once wondered if there was any way I could improve my current setup. That is, until Square Enix dropped the Hori Tactical Assault Commander – FFXIV Edition keypad in my lap.

The Tactical Assault Commander –TAC for short– has been around for a while, but it was only in the latter half of 2019 that Hori and Square Enix decided to collaborate to push out a keypad designed with FFXIV players in mind. The result is basically a refreshed version of the TAC, but with a pretty, simplistic FFXIV logo emblazoned on it to brand it as a collector’s item. This is what makes the keypad so darn expensive in the first place, setting you back $129 USD, if you can even get your hands on this limited run item in the first place.

That said, fancy designs and logos aside, how well does the TAC actually perform while playing Final Fantasy XIV? The answer, as you might expect, varies depending on how you have your hotbars set up, and how much time you’re willing to spend getting over the learning curve of using the TAC, especially if, like me, this is your first time using a gaming keypad.

Right off the bat, setting up the Tactical Assault Commander is exceedingly simple. It’s basically just a matter of plugging the thing in to your PC, and you’re good to go. I hopped straight into FFXIV with the keypad all set up, and by and large, the default settings worked well enough for my Dancer job.

The first two rows of buttons on the keypad are assigned to your first hotbar, though you can reassign the rest of the buttons to accommodate your second keypad as well. The TAC’s default setting has a Ctrl function assigned to one of the larger side buttons, allowing you to access your other hotbars if you have them.

Fiddling around with my Dancer’s actions with just the keypad took a lot of getting used to, especially since I’d essentially spent the last five years tapping on number buttons on my keyboard, and using my mouse to manually hit everything else from my second hotbar onwards; having every single skill at your fingertips is a whole new experience, and definitely takes a lot of getting used to.

There are also default button assignments for accessing quick menus like your settings and character screens, but I quickly reassigned those to other actions and skills, as I’d much rather fiddle with my settings using a mouse.

It’s worth noting that the TAC also comes with downloadable software, which means that you can reassign buttons and configure the keypad however you like it. The default configuration should work well enough for most players, but if you’ve got a more complex hotbar setup, it’s definitely worth diving into the software to customize it to fit your needs. The keypad also comes with profile switches so you can swap between different configurations anytime you want to suit different situations.

In your right hand, you’ll still have your mouse with you, taking care of camera control and whatever miscellaneous menus and functions you need to access with it. It’s an extremely ergonomic and efficient way of playing once you get used to it, primarily because the TAC helps to cut down a lot of unnecessary mouse movement and clicking when you want to get to your higher hotbars.

With the Tactical Assault Commander, ideally your right hand can just focus on camera control to look around you during combat, while your left hand takes care of all character movement and actions. Without the added step of having to move your mouse to hit other hotbars, gameplay in FFXIV felt a lot more streamlined to me once I’d gotten over the initial hump of learning how to use the thing.

The main issue, though, is that despite the left stick being adjustable to fit different hand sizes or grip styles, it never felt 100% comfortable for me personally. The adjustment range just isn’t large enough in my opinion, and it didn’t feel quite right or natural enough for me to move my character that way for an extended period of time. That’s to be expected, of course, having played with a mouse and keyboard all these years and being used to moving with WASD.

Still, after a whole weekend of fiddling around with the TAC and trying to get used to the left stick, I could never quite get to a place where it felt just as intuitive as playing with a traditional gamepad in my hands.

At the end of the day, it’s worth keeping in mind that in my case, I’m a player with very simple needs for my video games. With Final Fantasy XIV, I’d grown accustomed to just making do with a keyboard and mouse and clicking around on my hotbars with the mouse when needed. If the setup works and it doesn’t cause me a great deal of discomfort, that’s just fine by me.

After a few solid days of exclusively using the Tactical Assault Commander in FFXIV –including participating in the Eden’s Verse raids, Copied Factory raid, and other activities like crafting and gathering– I definitely saw the appeal of the efficiency that this keypad affords.

It feels incredible to be able to cut down on unnecessary hand movement and clicks, and parse everything down to just buttons and shortcuts. Despite my gripes with the unnatural feeling of the analog stick, I can’t deny that level of satisfaction that comes with using the TAC in an MMO like this one.

That being said, I feel it’s important to note that the Tactical Assault Commander is very much a luxury item for a player like myself. Especially with the FFXIV Edition being more of a collector’s item with a high price tag, I find it difficult to readily recommend this thing to the average FFXIV player out there. Especially with the insane amount of HUD customization you can already get in the game settings, the TAC is just a beautiful piece of tech that you won’t really need, no matter how much you might want it.