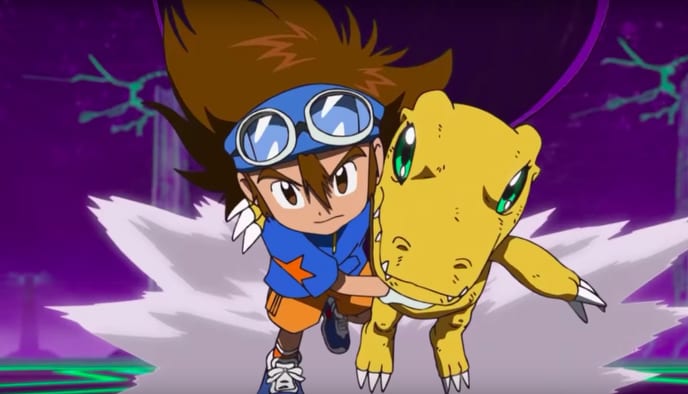 The Reboot of Digimon Adventure has people’s nostalgia flaring, and a new teaser trailer released for the show looks to stoke the flames before its release next month.

Streamed by Toei Animation’s official YouTube account on Mar. 5, the trailer is fairly brief and mainly offers brief glimpses of Tai and Agumon at the start of their adventure.

One moment shows Tai and his Digimon meeting for the first time, showcasing Koromon’s Digivolving into Agumon. Another shows machinery ranging from traffic lights to cell phones going haywire throughout the world, with another DigiDestined – Izzy – observing the phenomena alongside Tai.

A quick cut, and then Agumon is seen fighting against more malevolent Digimon that may be responsible for the ruckus, swiping his claws and letting off his “Pepper Breath” fire ball attacks.

It’s all crisp and clean to look at, applying a touch-up to the look and aesthetic of the original show. And yet, at the same time, it still feels like the original thanks to the designs of the characters remaining largely intact.

The trailer then reaches its climax with a glimpse of Agumon Digivolving into Greymon to battle against a larger, more dangerous opponent. The transformation process appears properly flashy, and Tai is seen standing right alongside his partner before the battle commences.

It then cuts to the reveal that the Digimon Adventure reboot will begin airing in Japan starting on Apr. 5.

Its fittingly hype, and fans will find plenty more details and easter eggs to love hidden within its brief runtime. The full trailer can be viewed down below.

The Digimon franchise has been busy in recent years, offering films centered around the original DigiDestined and their partners as well as a slew of new entries in game series like Digimon: Cyber-Sleuth.

One new game series, Digimon Survive, is slated for release this year as well, though a specific release date hasn’t been revealed yet. The full intro trailer for it can be viewed here.