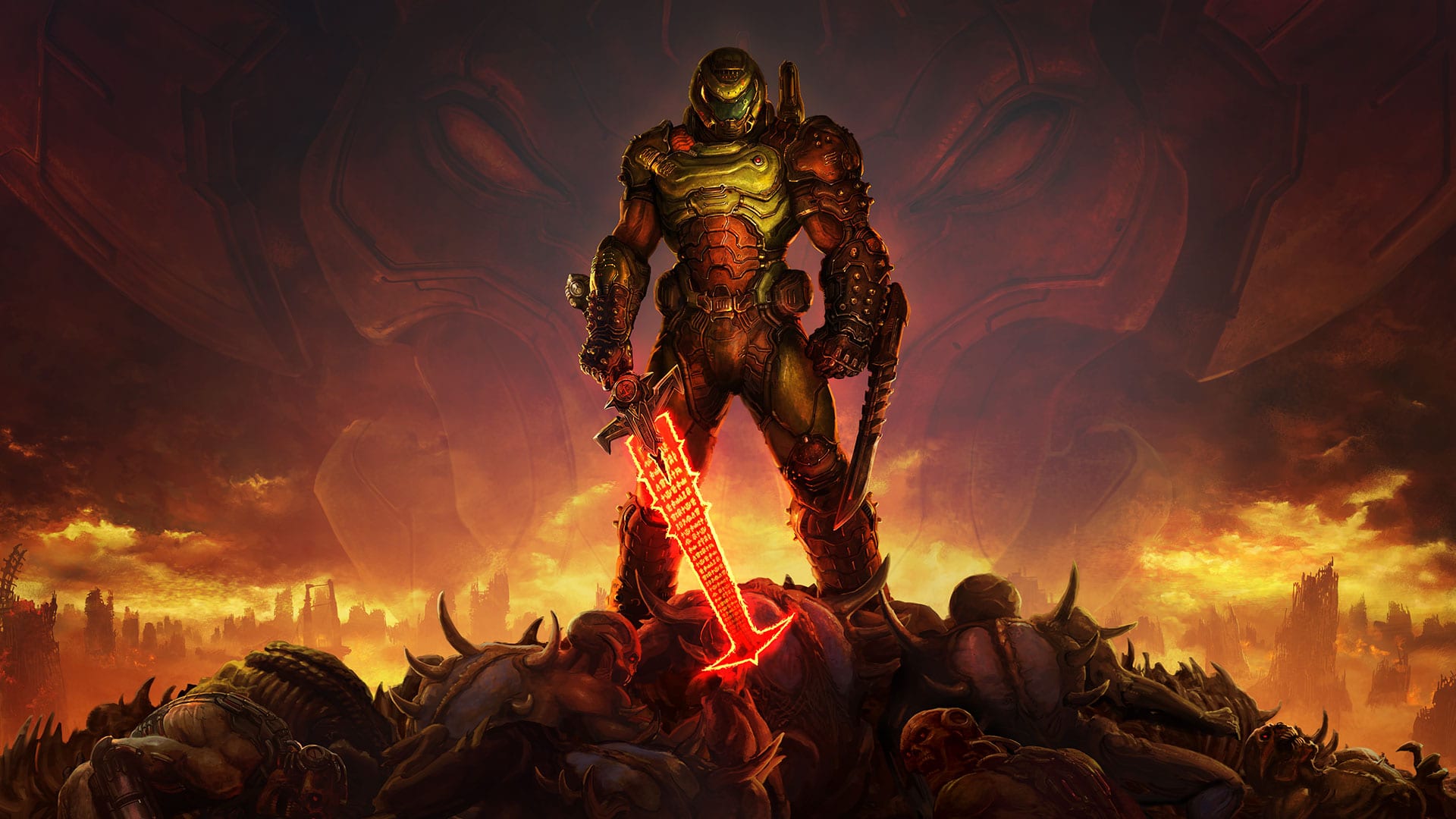 Even to the most casual observer, the level of violence present in the modern Doom games is immediately apparent. Demons are routinely eviscerated, and their ichor stains everything in sight.

With the recent release of Doom: Eternal, developer id Software has ratcheted up the brutality of their infamous Glory Kills by several orders of magnitude. Let’s take a look at some of the most extreme examples, shall we?

Doomblade to the Eye

A new edition to the Doom Slayer’s arsenal, the Doomblade is a vicious, serrated blade attached to the left gauntlet of the Praetor suit.

As you might imagine, it plays a crucial role in Glory Kill animations, all of which occur at point-blank range.

Nothing too elaborate here, just a simple blade through the eye socket, but its the detail of the act that really sticks with you. Look at that poor demon, desperately struggling and ultimately losing to keep the point from inching closer. You almost feel sorry for it.

Another straightforward implementation of the Doomblade. The Doom Slayer has here opted to use it, not as a scalpel, but as a brutal chopping instrument, cleaving the demon’s skull in twain.

The brain is destroyed immediately as the blade moves southward, becoming caught in the upper jaw and needing to be wrenched free with an almighty pull.

Just to shake things up, the Doom Slayer has here decided to use the Doomblade to cut this unfortunate Whiplash right through not once, not twice, but thrice.

The result here is snake sushimi; three parts of a demon where once one had been whole.

While you would imagine that simply bisecting a demon would be enough to get the job done, sometimes you just need to make an example.

Here we see the Doom Slayer opting first to cut off both of this poor soul’s legs, and then on the backswing, aiming to cut the beast’s now airborne torso in half.

A versatile tool, here the Doomblade has been used to stab a hapless demon in the sternum, before being ripped out vertically and taking the creature’s entire head off in the process.

Humerus to the Face

In the hands of the Doom Slayer, anything can become a deadly weapon, even his opponents own limbs.

Here, after ripping its arm out of its own socket, the jagged length of the broken humerus has been used as a surgical instrument to perforate the skull of this unfortunate Prowler.

Claw to the Retina

Again turning the tables on an unsuspecting foe, here our hero has used this Arachnotron’s own talon against it, breaking one off entirely and using it to stab it in the eye.

Kudos to the animators, you can really see the fear in that remaining eye, can’t you?

During the course of my happy research today, I discovered that the technical term for removing an eyeball from its socket is a process called enucleation, which is a word for an act derived from Greek mythology.

Who could forget the tale of Oedipus, gouging out his eyes after discovering he had married his own mother?

Here we see the Doom Slayer elucidating this point quite eloquently to a Pain Elemental, who at this very moment contemplates the cosmic irony of its own name.

In this example, we see the Doom Slayer force-feeding a Mecha Zombie its own railgun, having torn away its lower jaw to better accommodate the barrel.

Seems like overkill to me, but hey, whatever works, right?

Perhaps the image that has stuck with me the most, here we see the moment after the Slayer has brought his meaty fist down upon the skull of this unfortunate so hard that its entire head has been driven deep into its own torso.

I honestly just kind of feel bad about the whole situation, look at the poor thing.

Doom: Eternal is out right now, and you can experience the brutality of its shocking Glory Kills for yourself. We loved it, and you can read our in-depth review here.