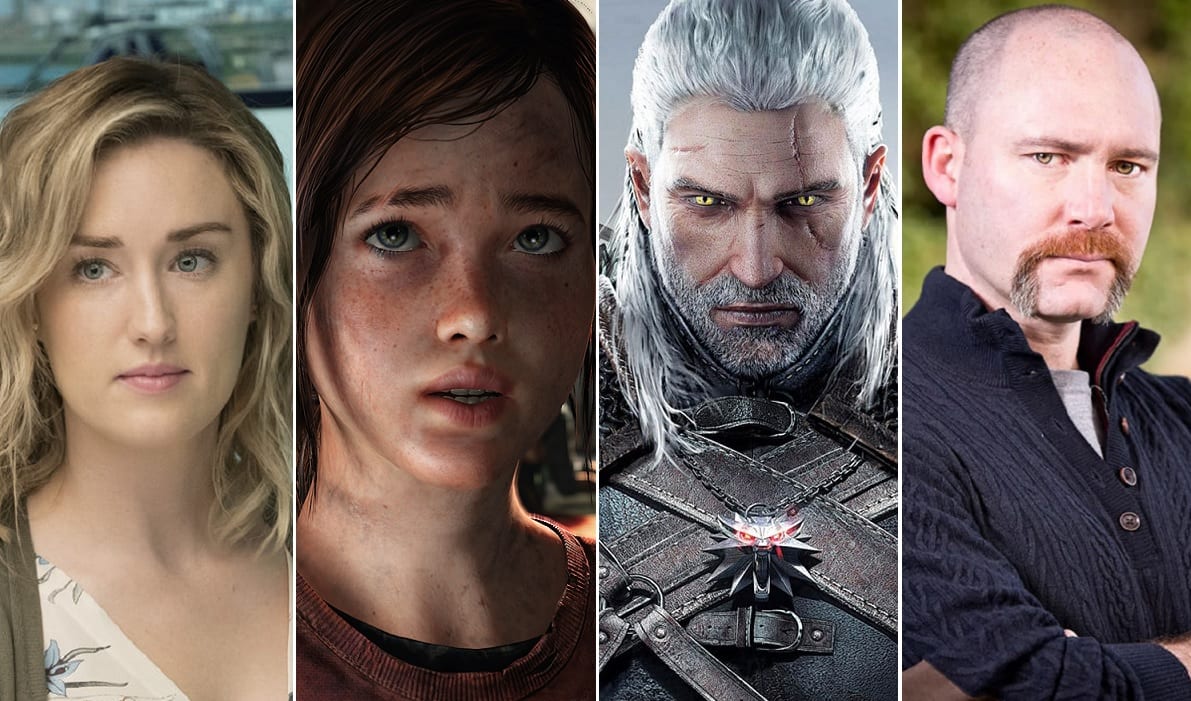 If Morgan Freeman is the equivalent to God in the movie industry, Dave Fennoy is the video games’ almighty, cemented by his voice performance as Lee Everett in Telltale’s The Walking Dead.

Across five episodes, Fennoy gives a moving performance, as his character tries to survive a zombie apocalypse and grow as a person.

What makes this already interesting premise even more impactful is the relationship Lee has with the game’s supporting characters, especially Clementine.

As a friend and father figure, you’ll be hard-pressed to find more heart-wrenching reactions to the many difficult situations that Lee faces throughout the game, with each emotional beat resonating clearly thanks to Fennoy.

Ashley Johnson – Ellie (The Last of Us)

Naughty Dog is responsible for some of gaming’s most celebrated and relatable characters of all time, as even non-gamers known who Crash Bandicoot and Nathan Drake are at this point.

Around the start of the last decade though, the developers created one of the most compelling characters in entertainment with Ellie in The Last of Us.

Introduced after the first time skip, Ellie is an angsty teenager, born into an apocalyptic world filled with death and sadness. As the game goes on, she displays a lot of depth, showing of plenty of wits, as well as an exuberant, adorable innocence in scenes like where she sees giraffes for the first time.

Throughout The Last of Us, players get to see Ellie grow, evolving from a temperamental, foul-mouthed kid Joel needs to protect to a clever woman he ends up depending on.

Her character’s growth can be credited to actor Ashley Johnson, who gives a ranged performance as Ellie, showing that her hardship and character have been shaped by the difficult world she’s been forced to grow up in.

In recent years, Michael Mando has gained notoriety and acclaim, with featured roles in television (Better Call Saul) and movies (Spider-Man: Homecoming) alike. Before his live-action rise though, you may remember his eerie performances in Far Cry 3, playing the psychotic antagonist Vaas Montenegro.

Serving as the secondary antagonist for the game, Vaas torments player character Jason Brody from the very outset of the game, kidnapping his friends and trying to kill him.

Despite his evil actions, it’s hard to deny how captivating he is, as each line and monologue he delivers is a memorable one.

It may seem odd to anyone outside of the video game world, but, at this point, it is safe to say that Mark Hamill is as synonymous with the Joker as he is with Luke Skywalker.

A lot of that has to do with his voice performance as Joker in Arkham City.

Serving as the main villain of the game, Joker is once again out to wreak havoc on Gotham in order to get the attention of Batman. Through the use of a deadly virus, the “Clown Prince of Crime” taunts the cape crusader, laughing maniacally all of the way.

Hamill’s voice played perfectly opposite Kevin Conroy’s gruff take on Batman, with each interaction between the two showing what an amazingly twisted relationship they have.

Ashly Burch has been a consistent presence in the video game industry for the last decade, lending her voice to prominent titles like Life is Strange, Borderlands 2, and The Outer Worlds. Of all of her roles though, it’s her voice performance as Aloy in Horizon Zero Dawn that evokes the most emotion.

Set in a unique post-apocalyptic world that mixes machines creatures and technologically inept, tribal-like humans, Horizon Zero Dawn explores what life would be like rebuilding after the end times. That experience is seen through the eyes of Aloy, an outsider with good intentions and strong ambitions.

As the game progresses, Aloy’s drive and spirit unlock a lot of the mysteries the world has to offer, as she uncovers lost areas and interacts with the technology humans chose to cast out.

What’s most admirable about the character is that she not only accomplishes this while being hated by her own people, she also overcomes that hate and helps the society that shunned her grow past it themselves.

Thank’s to Burch, gamers have another role model to look up to and strive to be more like.

Possibly the hardest thing to do in voice acting – and acting in general – is to make someone who sounds monotone and boring on purpose likable and interesting. That is exactly what Doug Cockle accomplished as Geralt of Rivia – a character stripped of his emotions via harsh training – in The Witcher 3

Even though Geralt is supposed to be this emotionless monster slayer, Cockle still manages to convey a wide range of emotions when voicing him.

Whether Geralt is joking with Dandelion, flirting with Yennefer, or expressing his happiness at seeing Ciri, each feeling is relayed so clearly and fiercely that the voice just becomes natural at one point.

Cockle has voiced plenty of other characters since his performance as everyone’s favorite Witcher, but there is no doubt that he is always going to be Geralt of Rivia.

From the outset of Far Cry 4 Pagan Min’s entire attitude is an eerie combination of calm and sinister.

One moment, Min is stabbing someone with a pen for getting their orders wrong, the next he is taking a selfie with you before having a bag placed over your head. That warm madness persists throughout the entire events of the game.

Min communicates with protagonist Ajay via radio, checking on his progress while simultaneously making small talk about things like killing the chef that made the crab rangoon Ajay ignored.

The character was so good, that many weren’t even aware that veteran actor Troy Baker was responsible for voicing him. Since he is usually known for roles as the good guy, Far Cry 4 highlights how talented the actor is when playing an eccentric villain as well.

Baker’s role as Min is even more iconic when you learn that he got the job by threatening to peel Ubisoft assistant’s face off during the audition.

Each of the voice performances we’ve listed so far regarding people that are clinically insane have belonged to the villains of the story. In a game like GTA V though, any protagonist you play, in reality, is always going to be a reprehensible, crazy character.

No character in GTA history is more deranged than Trevor Phillips: a man that revels in chaos, including murder and violence. Even though he is a scary man, he’s also surprisingly likable.

That’s all thanks to Steven Ogg, who gave a hell of a performance as Trevor, screaming, cursing, and cracking jokes throughout the entire game.

Beneath the drugged up madman, Ogg also shows off considerable range as well, as the sorrow in his voice is palpable if players choose to hunt him down as Franklin at the end of the game.

Nolan North – David (The Last of Us)

There is something to be said about a character that is voiced so well that players can sympathize with them… even though they’re a cannibal. That is exactly what Nolan North was able to accomplish as David in The Last of Us.

Introduced during the winter chapter of the game, David takes Ellie in after two trade supplies. While he seems suspicious at first, the group leader proves that he at least has good intentions trying to help his people survive.

Those intentions don’t last very long though, as the character flips a switch pretty quickly, becoming an intimidating antagonist Ellie must overcome if she doesn’t want to become dinner.

The most impressive part about this performance is that David isn’t even introduced until the last chapter. Despite this, the character and North’s acting left such a lasting impression on anyone who has ever had the pleasure of playing The Last of Us.

Mads Mikkelsen has had a major influence in entertainment over the last few decades, as he’s responsible for plenty of memorable television and movie roles. More recently, his reach has expanded to video games, giving a hell of a performance as Clifford Unger in Death Stranding.

While he may be the antagonist in Death Stranding, Clifford Unger’s actions aren’t evil or hard to understand. They’re actually pretty straightforward.

Unger has an insatiable thirst to reclaim custody of his son from Bridges, so much so that he will do anything to get back his baby.

This motivation and Mikkelsen’s presence as the character creates an atmosphere around the character that is both entrancing and intimidating. Every time he arrives, you can’t help but be drawn to him, despite the trepidations and intimidation you feel.

Putting anxiety and depression into words, and even using the right cadence to convey the feeling associated with those words, is no easy accomplishment. Melina Juergens was not deterred by this challenge though, a fact that is proved by how effortlessly she did it in her role as Senua in Hellblade: Senua’s Sacrifice.

As the game’s main character, Senua’s own fears, thoughts, and anxiety simultaneously haunt and guide her through Helheim. Those voices and sounds create an ambiance even more bone-chilling than the creatures that she must fight, making Hellblade: Senua’s Sacrifice one of the most gripping, intense games of the decade.

While the role itself is amazing, it is also worth noting that, not only did Juergens’ perform the motion capture for the character, she was the Indie studio’s video editor, with no previous voice acting credits to her name.

Dutch Van Der Linde is the suave, knowledgeable, smooth-talking vagrant that you know you shouldn’t love, but that you can’t help but to do so anyway. He is the character that is responsible for everything that happens in the Red Ded Redemption series, both good and bad.

For Red Dead Redemption 2, players got to understand the deeper machinations of this mastermind, seeing just what made him John Marston’s enemy in the original title to begin with.

Once again, Dutch is played by Benjamin Byron Davis and everyone is the better for it. The voice actor somehow managed to deliver an even more delightful and distinct performance this time around – which is quite the accomplishment considering the game was a prequel.

The most impressive thing about Dutch, and of course Davis’ performance, is that he seems so genuine and kind to start, contradicting all of the preconceived notions set up by Red Dead Redemption.

Yet, by the end of things, main character Arthur Morgan and players are truly left to wonder if he was always just out for himself, playing everyone like a fiddle.

Dutch Van Der Linde is easily the most flawed and brilliant character of this generation, and none of that is possible without the talent and spectacle provided by Benjamin Byron Davis.