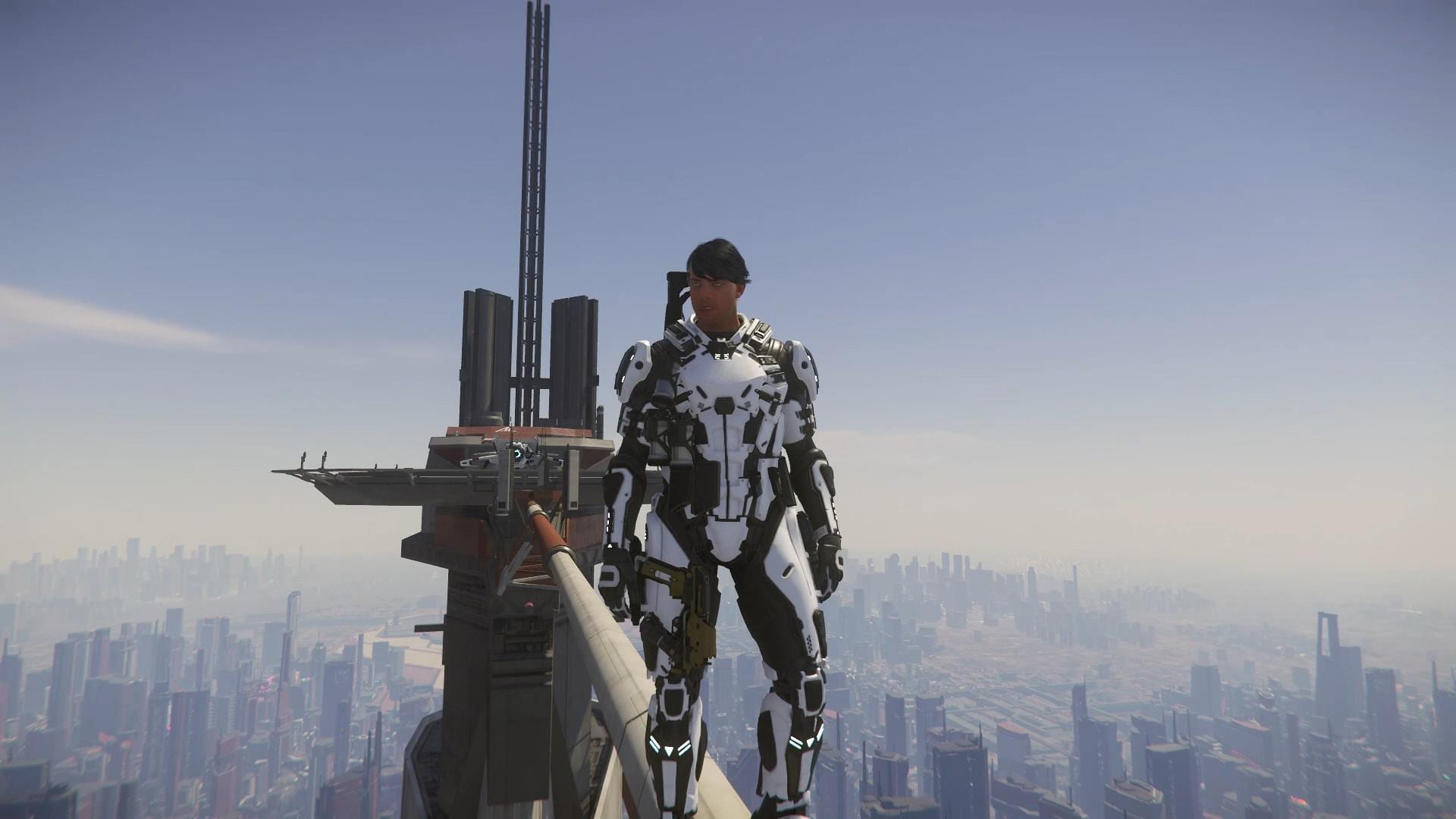 Cloud Imperium Games’ Star Citizen is basically a giant sandbox. It’s possibly more of a sandbox now that it’s still an unfinished alpha than it might be in its projected final form.

Like all sandboxes, perhaps the most interesting and fun experiences come from elements that one wouldn’t normally identify as intended features, but they’re instead things that you come across while simply exploring.

A few days ago I was happily minding my own business on the Coruscant-like planet ArcCorp, an interesting celestial body that has its whole surface covered by a gargantuan city.

While flying around, I noticed that the HUD indicators of quite a few ships piloted by other players were stationary on top of skyscrapers. I actually never thought to check the skyscrapers out. Most of them don’t have an interior, so I didn’t think the tops would be interesting either.

Little did I know, I was in for an adventure. You can see what I mean below.

By flying to the top of the tallest skyscraper in the game (a 172-floor tower in ArcCorp’s Area 18 called IO-North tower), I found out that not only its top was fully modeled, but so are the tops of the rest of the skyline, and a high percentage of those towers are equipped with fully-functional landing pads and walkways.

This may not be surprising for many other backers who explored more than I did, but since I never occurred to me before, it certainly was a pleasant surprise for me.

Funnily, on top of the IO-North Tower there is even a functional Covalex Shipping terminal. I have no idea what it is for.

While flying around in a starfighter already gives you an idea of the massive scale of the game, standing on your own two virtual feet on top of a giant skyscraper really conveys the scope of what the developers created.

By jumping off the top, you drop into the same ArcCorp plaza that you have visited many times, hundreds of meters below. There are no tricks here and no loading screens. The plaza you see from above isn’t an empty fake environment created to give an illusion of scale. It’s the same environment in a single, seamless world.

It’s impressive and awesome. Seeing the sunrise over the skyline at daybreak feels immersive and almost poetic.  I’m on top of the world, quite literally.

I certainly am looking forward to continuing this adventure in December, when Alpha 3.8 will change the annoying no-fly zones which prevent players from throughly exploring the lower areas of the cities as much as they can explore the tallest skyscrapers.

Don’t get me wrong: Star Citizen in its current form definitely isn’t for everyone (and if you want to know whether it’s for you or not, it’s free to try until December 5). Content is growing but still partial, and the same can be said about features. There are also bugs and glitches aplenty as you would expect from an alpha.

Yet, poking around this massive sandbox makes me feel like I felt over twenty years ago during the beta of Ultima Online. It’s an underlying feeling of adventure and discovery of things that I previously did not think possible or feasible with current hardware.

Personally — and your mileage may vary — it makes treading around the bugs worth it, and it’s a very ejoyanle gameplay experience on its own.