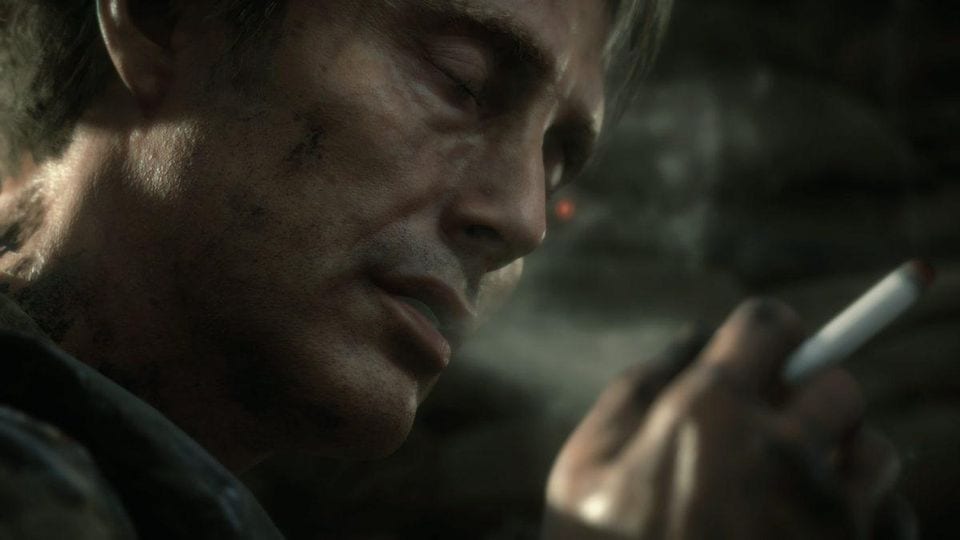 Published in 1984, Milan Kundera’s The Unbearable Lightness of Being is one of the cornerstones of literature and philosophical fiction. It’s a remarkably complex book about love, intimacy, art, and 70s European politics and history. But if we had to boil it down to its core concept, it would be its discussion about the idea of ‘heaviness’ and ‘lightness’ –themes that are surprisingly very intricately woven into Hideo Kojima’s newest game: Death Stranding.

Editor’s Note: As Z explores the thematic similarities between Death Stranding and The Unbearable Lightness of Being, she does touch on spoilers for Kojima’s game. If you’ve yet to finish the game, you might want to turn back and return later for the read and discussion!

To start, let’s take those things at face value. When taken literally, being heavy simply means that you’re carrying too much on you, and that’s something that you constantly have to grapple with in Death Stranding. As Sam goes on his journey to reunite America, he makes deliveries from one ‘knot’ to another. As the game wears on, it actively encourages you to take on multiple orders at a time so you can be as efficient as possible.

Being Light in Gameplay

So here’s the thing about making deliveries in Death Stranding: you want to be light. Sure, it’s funny to watch Sam carry a jenga tower’s worth of cargo on his back and have him trip over a rock and drop everything the first couple of times, but you don’t wanna be doing that for the entire game.

From a gameplay perspective, Death Stranding wants you to be both light and heavy at the same time. Let me break that down.

When taking on multiple orders, you want to free up cargo space for the actual items you have to deliver. You might be tempted to bring tons of gear with you, like ladders, climbing anchors, and PCCs. But spend a few hours with the game, and you’ll come to realize that at this point, you’re just carrying too much stuff.

As you’re making a trek across the continent, you’re bound to come across other items and structures that players have left behind. With that in mind, you start to get the message that you’re supposed to travel light, at least as far as equipment is concerned.

But when it comes to orders, the game definitely wants you to be as heavy as possible. The game actively rewards you for lugging large amounts of cargo around the world, and as far as gameplay is concerned, it’s certainly more efficient to carry as much as you can and complete your deliveries in fewer trips. You’re meant to be light with your possessions, but heavy with the needs of the cities.

Being Heavy With Connections

At the risk of sounding way too pretentious, here’s a popular excerpt from Kundera’s book that distills its main themes into one neat paragraph:

“For there is nothing heavier than compassion. Not even one’s own pain weighs so heavy as the pain one feels with someone, for someone, a pain intensified by the imagination and prolonged by a hundred echoes.”

The Unbearable Lightness of Being, Milan Kundera

In The Unbearable Lightness of Being, Kundera uses the idea of lightness and weight to illustrate the emotional load that the book’s characters must bear. When something begins to weigh you down, when you’re forced to grapple with your emotions over your ties to something or someone, to paraphrase the book a little, we refer to these dramas with weight. We refer to them as great burdens. When that happens to a character in the book, we see them as ‘heavy.’

However, when you can let go of those connections and burdens and problems, you’re suddenly left with a feeling of freedom. “The absolute absence of burden causes man to be lighter than air” –and what better way to describe a character like Sam in the context of Death Stranding?

By definition, Sam is exactly the kind of character that would be glorified in the first half of Kundera’s book. When the game starts, he’s immediately introduced as the kind of guy who just wants to live his life from day to day; he’s reluctant to help Bridges, he constantly reminds everyone that he has no ties or connections to anyone, he’s a lone wolf.

That kind of lightness is portrayed positively in the first half of The Unbearable Lightness of Being, especially when contrasted with the heavier characters who are often perceived as weak or neurotic. Being light means that you’re free to do what you want, pursue what you want, and live life to your fullest.

But, of course, the story of Death Stranding won’t allow for that. As soon as you’ve completed the tutorial section of the game, Sam finds himself immediately drawn into Bridges’ plan of building the chiral network, and Amelie is the primary reason for that.

As the game goes on, we find him becoming literally and figuratively heavier with the burdens that he takes on. His journey brings back memories of his familial ties and sense of responsibility that he feels for Amelie, and as we interact with the rest of the game’s cast and meet the myriad of colorful NPCs, we (and Sam) begin to see that maybe the world’s not so bad after all.

By the time we reach the end, Death Stranding presents to us an illusion of choice. Sam is asked to decide whether he should allow the sixth extinction event to happen straightaway and doom humanity, or delay it, and let the world live to die another day.

At this point in the story, we already know that the cycle of extinction has been around for a while. Humanity has survived five previous cataclysmic extinction events, barely scraping by, though this sixth one is meant to be the deadliest. The idea of a cyclical lifestyle and history is one that permeates Kundera’s book as well, as the author makes use of Nietzsche’s writings on the Eternal Return theory to present his own conclusions on lightness and weight.

Eternal Return is simple in concept; it’s the idea that all things in life and existence are set to recur over an infinite period of time, like a cycle. It means that everything is predetermined, and this gives meaning and a sense of weightiness to everything we do.

As Kundera states in his book, this weightiness is the greatest burden that we have to bear, and it prevents anything from being fleeting or meaningless at all. “If every second of our lives recurs an infinite number of times, we are nailed to eternity as Jesus Christ was nailed to the cross.”

Consequently, if we broke free of the cycle and there was only one life to live, man would become light and absolutely free of burden. In theory, this should free us, but the thought of everything becoming sudden and fleeting and devoid of meaning is unbearable. If life passes quickly with no return, it becomes insignificant, and our decisions cease to matter. That’s unbearable, hence we’d experience the unbearable lightness of being.

At the end of the book, Kundera reaches an answer to his original question: which shall we choose? Heaviness or lightness? His answer strikes a middle ground: some things in life matter, but most things don’t, and this makes life bearable. For if every little thing in life was significant, we’d be crushed under that weight and burden. But if nothing mattered at all, the lightness would be unbearable.

Similarly, this sentiment seems to coincide nicely with a particular gameplay mechanic in Death Stranding on a very micro level. While you are encouraged to take on as many orders as you can in one go, carrying too much cargo can cause Sam to become over-encumbered, making him walk at a snail’s pace, unable to perform any actions at all.

It could be seen as weightiness taken to the extreme, where Sam becomes literally overburdened by the weight of his obligations and ties to the world and people around him. Just as Kundera surmises in his book, there needs to be some sort of middle ground. As mentioned before, be light in your possessions and heavy with the needs of others, but never to the point where the burdens crush you.

The Eternal Return ties neatly into Death Stranding’s themes of a cyclical history and existence, and the importance of being heavy, being weighted down to something. Both Death Stranding and Kundera’s book go beyond the idea of just finding importance and significance in making connections with other people. They question our ties to the world and humanity itself and force us to reckon with our own existence and the decisions that come with being alive.

Putting the big picture aside and zooming back in for a moment, both Death Stranding and The Unbearable Lightness of Being ultimately reach similar conclusions. In Kojima’s game, Sam denies his weight even up to the very end, until he finally recognizes his own ties to BB and the people around him.

While both Kundera and Kojima seek to strike a middle ground between the two extremes, Death Stranding leans heavily into the importance of weight and the significance of everything we do. Save for carrying so much to the point where Sam can barely walk, weight is very much seen as a positive thing in Death Stranding, and it shows in nearly every aspect of the game.

Even in Kundera’s book, where heaviness seems frowned upon for most of it, protagonist Tomas also eventually realizes that he can find true happiness in his partner as well, finally allowing himself to be weighed down and free of the curious suffering that comes with lightness.

Considering how strong the emphasis is on weight distribution and the contrast between thematic lightness and heaviness in Death Stranding, it almost seems obvious that perhaps Kojima should’ve opted to open the game with a Kundera quote instead of something from Kobo Abe.

It’s clear what Kojima’s conclusion is on the matter. Earlier, I mentioned that the player appears to be given a choice with regards to humanity’s fate, but it’s not a choice at all. The only way to proceed is to have Sam accept his weightiness and continue the cycle of the Eternal Return because that’s the only logical conclusion we can come to by the end of his journey.

While Death Stranding never pays much mind to the concept of lightness itself, it’s obvious that weightiness is something that the player’s meant to embrace through every facet of the game. Whether it’s through burdening yourself with the promise of a delivered package, or Sam accepting the expectations placed on him by the people around him, we’re meant to see emotional weight as something that can bring meaning to life.

And isn’t that the point of Death Stranding in the first place? We connect and reconnect with people all over the world because that’s the only way humanity can survive through countless cycles of destruction and be better in the process. Any other way would be too unbearable.