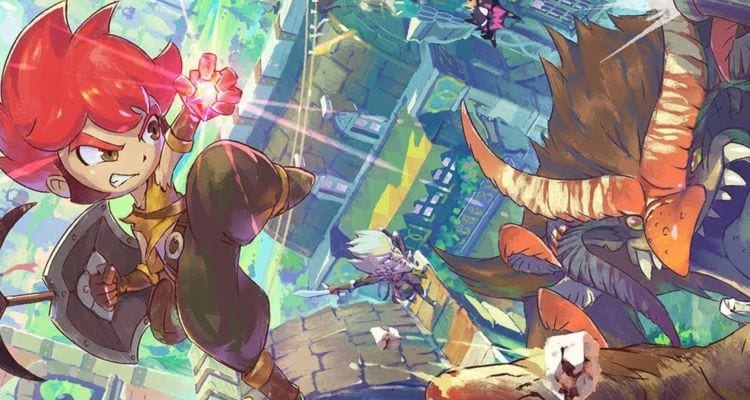 Little Town Hero. How do I even begin to describe Little Town Hero? Well, I’ll say this much: if, prior to reading this review, you thought the game looked quirky, fun, interesting, or any combination of the aforementioned adjectives, let me nip that in the bud right now. You’re probably gonna wanna temper your expectations a little.

Putting players in control of a young boy named Axe, or whatever you want to name him, you’re born and raised in a small town that you’re not allowed to leave. And naturally, that makes you want to leave.

Before long, though, the town starts getting attacked by monsters, and it’s up to Axe to fend them off. And this is where things go wrong. Oh, you can’t even imagine how wrong they go.

Little Town Hero isn’t a turn-based RPG in the traditional sense that you might’ve been expecting. There are no random encounters, and the entire game is kind of like a boss rush of sorts. In between the big boss battles, you’ll be running around town and talking to NPCs, doing little quests for them, and maybe engaging in shorter battles here and there against the rival character who always wants to brawl with you for some reason.

Other than that, it’s all about the boss battles, and these can seriously drag.

I’ve talked about the combat system pretty extensively in my impressions piece of the game, but I’ll recap it quickly here.

Both you and the boss are given a deck of cards to work with, and you’ll draw a few cards each turn. The cards you draw are known as Izzits, and you can spend energy to turn a card into a Dazzit, which can then be actually used against your opponent.

Red cards are primarily damage cards, yellow cards are more defensive and can be used until their shield values run out, and blue cards are kinda like buffs or ability cards that can give you a small boost in damage.

In between turns, you also get to play a mini board game where the location of the battle will change. You’ll move around a board based on the town map to change the battle terrain, and you could potentially get backup buffs or attacks from any NPCs who happen to be on the tiles you land on.

As the game progresses, you’ll also be able to upgrade your cards to make them a little more powerful. You never really get new cards in Little Town Hero, but the small, incremental upgrades do help to make you feel like you’re getting a little stronger as you go along.

Not that it really matters in the grand scheme of things, though, as the bosses in Little Town Hero can often feel like they’re getting seriously overpowered cards that would just wash you away with one unlucky turn. And here’s the biggest problem with the game.

Boss battles in Little Town Hero can seriously drag on and take up to 30 minutes or even more to clear. Much of the time spent in battles is on the luck of the draw, where it can often feel like you just don’t have the right cards to break all your opponent’s cards in one turn. This problem is exacerbated when your opponent draws a card that can inflict some sort of status effect on you, or just force you to waste turns and wait a while more before you can strike back.

There’s also a lot of waiting involved in Little Town Hero’s combat system; the animations are pretty but unskippable, you have to roll the dice every turn to play the little board game, you have to deal extra guts damage in between every point of heart damage you deal and that just drags out the battle, and you’ll need to waste turns and take heart damage yourself if you’re out of cards or BP to bring them back.

This can cause battles to take up a ton of time, and when so much of the battles seem completely up to luck at times, this makes the game frustrating to play. The interim moments as you’re exploring the town can initially feel like a breath of fresh air… until you realize that the story itself isn’t really all that interesting either.

The characters definitely have their classic charming Game Freak moments, with little bright spots of dialogue that put a smile on your face. And yet, the overall plot feels dull and mundane, and then you reach the next big boss battle, and you’re reminded all over again why you’ve become just so tired of playing this game.

Little Town Hero’s soundtrack is easily its saving grace, because it’s stellar, which is to be expected from the composer of Undertale and Deltarune, Toby Fox. Even then, it’s certainly not the strongest collection of music we’ve seen from him, with more than a handful of tracks that are often just mind-numbingly grating and repetitive.

Little Town Hero is a classic case of “has potential, but woefully executed,” and that really sucks to say when it seems to have so much going for it on the surface. Lovely graphical style and aesthetic, pretty animations from both characters and monsters, and the occasional banger in the soundtrack. And yet, it wasn’t meant to be. Maybe next time, Game Freak.

Should You Buy Little Town Hero?

Unless you like long drawn out card battles against enemies that have way better cards than you do, probably not.

Who Is Little Town Hero’s Developer?

Game Freak, also known for their work on the Pokemon games.

The game was released for the Switch on Oct. 16.