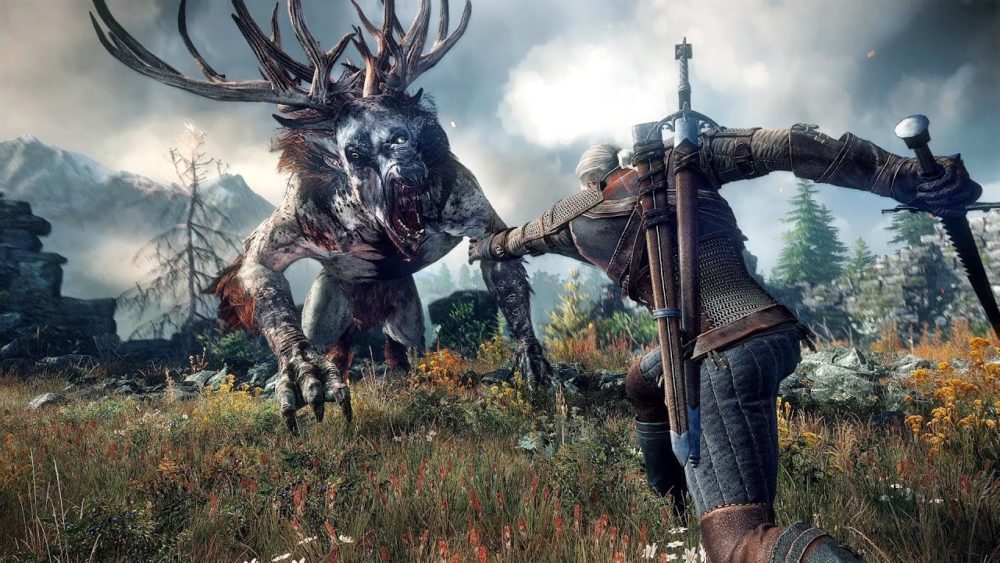 With The Witcher 3 out on the Switch, there are going to be some fresh faces playing this wonderfully massive RPG. There is a lot to learn when it comes to The Witcher 3’s combat, exploration, and just basic gameplay. With that, let’s dive into some general Witcher 3 tips that will help new players understand the crazy world of The Continent (yes it’s actually called that).

White Orchard is the first area of the game that Geralt gets access to and it does a great job of introducing the player to the world and lore of the Witcher. Your time in White Orchard can be brief, but it’s in your best interest to stick around and do as much as you can.

Do all the side quests, and go off and find any exclamation points on the map in the area because they too, will lead to more quests and more XP. There are also six places of power in White Orchard, which are incredibly important, bringing us to our next point.

These ominous looking stones are pretty much just free skill points. Whenever Geralt finds one, he gets a free skill point and a boost to whatever spell is associated with the place of power.

So if the place of power has the Igni sign, the power of that sign will receive a boost for a certain amount of time. They are basically free level ups, and you can even get them again in New Game +; so make sure you explore the map.

Axii is the sign that is basically Jedi mind control. It has two uses, either in combat or during dialogue.

In combat, you can use the sign to temporarily stun enemies. It’s good for crowd control, especially in tight areas. You can also use it on your horse to calm it down whenever there are enemies around.

If your Axii skill is high enough, you can use the sign to charm people during dialogue into revealing information that could greatly benefit you.

Just be careful not to use it on someone in a group conversation, because their friends might become aware that you’re putting someone under a spell and it will initiate combat. Make sure you always have this skill equipped.

Unlike other RPGs, when you level up skills on Geralt, you don’t just automatically get the boosts. You have to equip the skills you want and there are a very limited amount you can have active at one time.

So don’t go halfway through the game before realizing this important fact, unlike some moron out there (It’s me, I’m the moron).

Another important factor of leveling up is mutagens. Beside your ability slots is a diamond shaped slot for your mutagen. Red is strength, green is health, and blue is magic.

There are lesser, regular and greater mutagens; the bigger they are, the more it benefits Geralt. If you match mutagens with the same color of ability, you get even greater bonuses.

As an example, if you apply a greater red mutagen to a slot that also has 3 strength skills equipped, you get +40% attack power. Because you’re new to the game, I’d recommend green mutagens because they give you extra health that you might really need.

Get Some Saddle Bags

Roach may be your horse and the one true companion (even though Geralt has had multiple horses in the past and just names them all Roach), but he’s more of a pack mule. You can access your things anytime in your inventory, but Roach is apparently the one carrying it all by using saddlebags.

However, you can buy/obtain better saddlebags so that Roach can carry more. It just generally helps to have more inventory space and never get over-encumbered. Search the local shops as soon as you can for them and, as a rule of thumb, always see what vendors are selling so you can get a better upgrade.

Just Take It All

When I say loot everything you can, I mean literally everything. Ordinary items you find can be incredibly useful, especially when it comes to alchemy.

There’s a use for everything (except maybe brooms and cups), but when you enter a house or building, steal everything in sight, even if there are people in front of you!

This isn’t like Skyrim or Fable where you will get in trouble is someone spots you taking their possessions. Alsom loot any and every corpse you find, even monsters.

Stealing Is Good Because It’s How You Get Food

To piggyback off the last tip, stealing everything is pretty much the only way you’ll find food, and food is how you heal yourself.

Unlike other RPGs, there are no real health potions in the Witcher 3 and Geralt mostly only gets healed from drinking 13 jugs of apple juice. Always make sure to have a lot of food in your inventory, especially if you’re about to go into a cave or start a big fight.

It’s also good to get off the road and explore the wilderness because a lot of the ingredients you need are in the wild.

Besides alchemy and food, ingredients can also be used to craft new armor and weapons.

Some of these can be bought from merchants and shops, but you might need to do some exploring to find certain rare items. Killing monsters will also net you some useful and gross ingredients, but that’s just part of being a Witcher.

Using the materials you’ve stolen and scavenged, remember to craft oils and bombs. They make fighting monsters much easier and, trust me, there are some tough cookies out there.

You should be able to craft some of the things you need just by looting everything you see, but you can also buy some materials from shops and merchants.

Check the bestiary to see what each monster’s weaknesses are, and then craft the appropriate oils/bombs. Whenever you meditate, both your oils and bombs will regenerate, so you only have to craft them once!

Play Everyone In Gwent!

If you’re into card games, then Gwent might be one of the greatest mini games of all time.

Once you reach the inn in White Orchard, you’re introduced to Gwent. It may seem a bit daunting at first but it’s actually very simple. When you beat someone in Gwent, they will reward you with a card from their deck.

I cannot stress enough that, if you want the achievement that comes with playing Gwent, or if you’re trying to go for the platinum, you should play absolutely everyone as soon as you meet them.

Once you’re done some side quests, the NPC who gave you said quest might be gone afterwards and so will the opportunity to play them in Gwent. Gotta catch em’ all! Or um… collect them all.