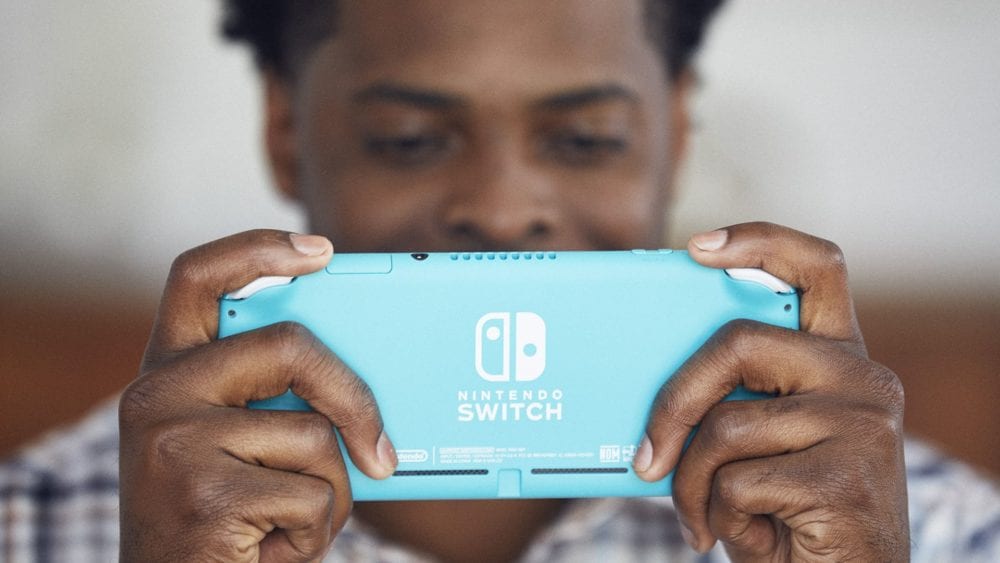 The Colors Look Better Up Close, Even Grey

All three of the Switch Lite colors are very poppin’. The original Switch has lots of personality with its swappable color scheme options but the Switch Lite takes it up a notch by coloring the entire system.

As you would imagine, the yellow and turquoise blue colors are bold and beautiful. They are bursting with personality and are instantly among the most vibrant video game consoles ever made.

Not everyone has the confidence and personality though to rock a bright yellow or turquoise Switch Lite though.

Before the Switch Lite, you had to settle for the grey Joy-Con options if you disliked color which was very muted and traditional looking.

The grey option though for the Switch Lite is much prettier. It’s a much lighter grey and is combined with white buttons which contrast really nicely with the grey. My first thought was that it looks like a fresh new pair of sneakers. Very sleek!

Everything should just be matted at this point. Who doesn’t love matted stuff? Some of you reading definitely raised your hand, but you’re probably in the minority.

If I could matte everything I ever touched I would. I’d sleep on matted sheets, brush my teeth with a matted toothbrush after eating my matted waffles and then drive my matted car to the grocery store to buy more matted waffles.

So yeah, I’m all about the Switch Lite’s matted grip. There’s not a ton to report back here other than yep, it’s matted, and yes it feels great. I definitely feel like I have an improved handle on the console with it and it feels lovely to the touch.

The Buttons Are Improved

As many of you know, the Switch Lite is free to implement the classic Nintendo-style D-Pad now that it no longer needs to be separate to accommodate for being detached.

I actually don’t mind the regular Switch’s D-Pad, so for me, this is whatever, but I do get that lots of people are looking forward to it and yep it’s there and is all good.

However, what I was surprised about is the feel of all the other buttons too. Everything is satisfyingly “clickier” including the triggers as well.

While there’s definitely going to be some people that prefer the way it was because that’s the case for everything with any change, I’d categorize it as an improvement across the board as long as Joy-Con drift doesn’t rear it’s ugly head again.

The Games Play the Same but Smaller

This shouldn’t come as a major surprise since we are talking about more or less the same hardware other than improvements to stuff like battery life, but it’s worth noting that we noticed no noticeable differences, good or bad, while using the Switch Lite.

We got to play Super Mario Maker 2, Mario Kart 8 Deluxe and The Legend of Zelda: Breath of the Wild at the preview event and everything ran and performed exactly the way they did on the regular Switch.

Just remember which games can and can’t be played in handheld mode, and check for the playable in handheld mode label on the box of any games you’re not sure will be compatible.

The only big distinction, of course, is the difference in screen size. At 5.5 inches, Switch Lite does have a smaller screen than that of the regular Switch and it is noticeable compared to the 6.2 inches that the regular Switch has.

This was the only aspect of the Switch Lite I wasn’t that thrilled with especially since you don’t have the option to dock obviously. That 5.5-inch screen is as big and beautiful as you’ll ever get to see Switch Lite games and that might be a problem for some people.

Of course though, if the size of the regular Switch is a problem for you in terms of transporting it around, then the smaller screen size will be a plus in your book.

Fortunately, being small does have some advantages of course and one of them is how much lighter the Switch Lite is. It’s in the name, so, yeah not that surprising, but still welcome nonetheless!

If I’m not propped up in an ideal position with the regular Switch, over time the joints in my hands/fingers will sometimes start to get a little sore.

I didn’t play the Switch Lite long enough to say that this issue for people who experience it as I do is fixed, but I imagine less weight can only help.

It’s also probably worth noting here that I have big hands and felt the Switch Lite still sat very well in my grasp. I imagine for people with smaller hands, it will only be even better considering the smaller size of the console.

Overall I walked away very impressed with the Switch Lite. If reinvesting more money into the Switch eco-system is something you’re OK with doing, and you won’t miss docked mode, the Switch Lite is a fine piece of hardware.