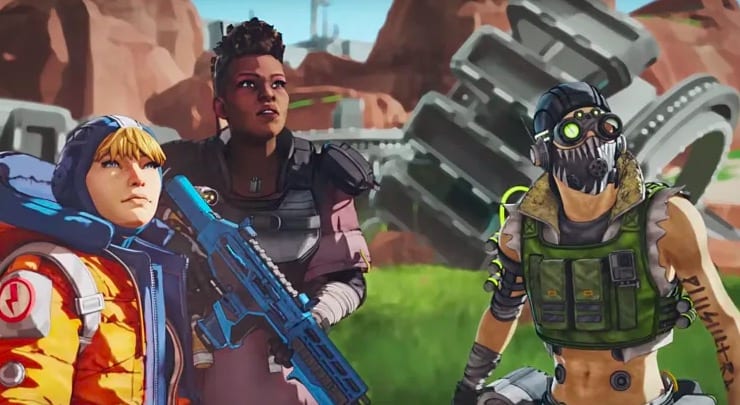 Apex Legends Season 2 will be going live later today and with this new season comes tons of gameplay tweaks, a new weapon, a new legend, and much much more.

If you plan on jumping into the new season, then you probably want to know about everything new coming to Apex Legends. Well, look no further!

Wattson is a brand new legend coming to Apex Legends for Season 2 who is an engineer that specializes in tactical play by using the mechanical skills that she learned from her father.

Her real name is Natalie “Wattson” Paquette. She’s 22 years old and is from the homeworld of Solace. Her tactical ability, Perimeter Security, allows her to connect nodes to create electrified fences that damage and slow enemies that stand in her way.

Her passive ability, Spark of Genius, lets her fully charge her Ultimate Ability by using Ultimate Accelerants. By standing next to interception pylons, she can also boost her Tactical Ability recharge.

And last but not least, her Ultimate Ability is called Interception Pylon. With this, Wattson can place electrified pylons on the ground that destroys incoming ordnance and it repairs damaged shield as long it doesn’t get destroyed by the enemy.

Wattson is shaping up to be the type of hero who helps her teammates in a bunch of different ways by protecting herself and slowing down the competition.

The L-Star is here and it does not play around! This rare and super-powerful LMG fires high-damage plasma projectiles at a fast rate.

It’s unique projectiles are much larger than those fired by other weapons in Apex Legends but it is a little bit slower at the same time. You might need to be a bit closer to attack other players with it, but you don’t have to worry much about precise aiming since the impact range is pretty big.

The L-Star is very powerful of course, but that comes with a few caveats. The weapon will begin to overheat if players hold the trigger down for too long and when it does overheat, the lens will have to be replaced. If you’re a good Apex Legends player though, you’ll probably learn how to use fast bursts and take breaks instead of going all out and damaging the weapon.

Yes, a new ranked mode is coming to Apex Legends and it’s called Ranked Leagues. The new mode will run in periods or “series” for a short amount of time, with the first one starting with season 2.

There will be six different tiers with each one having four divisions. The tiers are as follows: Bronze, Silver, Gold, Platinum, Dimond, and Apex Predator. As you work your way up the divisions –IV, III, II, and I– you will need to obtain a certain amount of Ranked Points (RP), which are earned by getting kills and performing well in matches.

Based on your rank, you’ll be able to carry over rewards at the end of the season into the next season.

And just so you guys know, the farther you advance in the ranks, the longer the load times might be when it comes to matchmaking. The devs want to make sure that you’re facing off against players with equal skill, so it makes sense.

With a new season of Apex Legends comes a brand new Battle Pass that comes with a load of improvements and new features.

Starting in Season 2, players will be able to complete a mix of daily and weekly challenges to level up their Battle Pass. These challenges will mix things up and will provide some interesting variety so that progression feels fun and interesting, with new rewards.

It’s also good to mention that it will take much less time this time around to get to level 100 on your Battle Pass.

There will also be more Legendary items that will be added to the Battle Pass and there will be a Legendary item every 25 levels in the premium track. You can expect character exclusives, cosmetics, skins, and other cool things.

Respawn has also removed badges and basic stat trackers from the premium Battle Pass track for the new season. You’ll still have a badge, but it won’t take up any additional slots.

Voice Lines have also been replaced with Crafting Metal rewards, letting players earn enough crafting metals to craft any of the Legendary items.

Four Legendary skins were also announced –two for some weapons and two for the Legends.

Kings Canyon will also be getting some fresh changes that makes the map of Apex Legends feel a bit different than ever.

The Repulsor tower has been destroyed for starters, apparently due to an EMP attack on the map, which is causing a ton of beasts to show up on the map.

The towers signals were keeping these monsters away from Kings Canyon, but now they are here and they’re not very friendly. While they may seem like a terrifying threat to most players, there will be ways to take advantage of them it looks like.

The L-STAR might be the only new weapon that’s being added to Apex Legends right now, but Respawn is also making several changes and balancing tweaks to some other weapons too.

First off, there are new Hop-Ups coming to the game via this new season which basically serve as special attachments for a select few weapons:

These weapons have also been buffed up a little bit to make them more powerful: Flatline, P2020, Alternator, and Triple Take.

If you thought that the Arc Star weapon was a bit unfair, it’s also been tweaked a little bit to make fighting against one more manageable. Respawn has increased the ignition delay from 2.5 to 2.8, sticking a full health player will now down them, and players at the edge of the explosions no longer get their shields completely shredded.

The ammo stack sizes have also been remixed a little bit:

And lastly, Airdrop packages will now use different loot tables for people who are in different phases of the game. Players will find more Krabers in early parts of the game while Mastiffs will have higher chances of spawning towards the endgame.

Season 2 (Battle Charge) of Apex Legends drops today! If you end up playing this week and you’re in the market for some guides and/or tips. Just search for Twinfinite as we will have tons of guides as we play Apex Legends over the next few days!