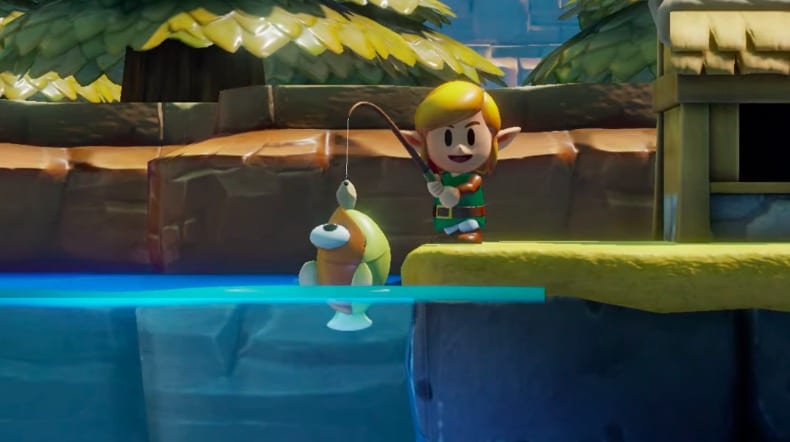 When the original version of The Legend of Zelda: Link’s Awakening first came to the Game Boy back in 1993, I found myself enamored with the strange, yet unfamiliar land of the mysterious Koholint Island.

Link’s Awakening is one of the few Zelda games that doesn’t even take place in Hyrule, but on a dreamlike island where Link finds himself washed up. Is it a dream? Is this real? Why are there Chain Chomps and Goombas here?

I adored the Zelda classic so I was ready to dive into the full-fledged remake once I heard the news that Nintendo would be bringing it to the Switch with some much-needed shine and polish. After playing Link’s Awakening for about 15 minutes at Nintendo’s E3 2019 booth, I’ve realized that the game is almost frame-for-frame, an identical version of the original.

Of course, the game comes with some added features and elements to make the overall experience fun for newbies, but there’s not much new here, and for me, that’s perfectly okay.

Once I started up the demo, which brought me to the intro of the game, I immediately knew where to go and what the goal was. Even though it’s been a few years since I’ve played the original, Koholint Island was very familiar to me and playing it for the short amount of time, had me very excited to replay the game with a new shine and upgraded visuals.

Link basically controls like a small action figure or a toy and walking around the island as him feels pretty smooth, thanks to the control stick on the Switch –way more precise than the Game Boy version. Link still plays the same as the original but controlling him just felt very good and combat was simple yet satisfying.

The demo only had me using a sword and a shield, but you do unlock other items that help you progress through the island, but most of the combat is pretty straightforward and revolves around blocking an enemy’s attack before going in for a sword strike.

But that’s always how Link’s Awakening has been: it’s light on combat but plays more like an intricate puzzle game or even a Metroidvania.

Most areas in the world will be blocked off from the get-go, making the experience a bit linear compared to other Zelda titles as of late but it’s extremely satisfying to gain access to previously blocked areas thanks to abilities like Roc’s Feather and the Power Bracelet. The former allows you to jump over small gaps and the latter lets you pick up heavy boulders.

You’ll be helping out several of the island’s inhabitants with their personal problems like some sort of errand boy while you collect all of the musical instruments with the goal of waking up the legendary Wind Fish atop the highest mountain peak on the island.

For newcomers to the series, you should be aware that the game isn’t open world like Breath of the Wild or anything but a more guided experience that takes way less time to get through. The dungeons are short, the island isn’t too massive, and everything seems to remain the same, for the most part.

There’s not much “new” stuff to check out in Link’s Awakening if you’ve already played the original. But thanks to the visual upgrades and quality of life stuff, playing the game feels as good as ever. Little touches like being able to open up your map on the fly without wasting an inventory slot is a nice touch.

The visual style to the game gives it a more childlike and whimsical nature; the colors pop, Link and the other characters look super adorable and the island feels more alive than ever before.

If you’re a Zelda fan and have yet to experience this charming and whimsical entry in the franchise, then this the perfect way to do so. It’s also just a really good Zelda game to play for a bit while we all wait for the hopefully amazing sequel to Breath of the Wild.

For more hands-on E3 2019 previews, make sure to keep checking back here at Twinfinite. And if you’re interested, check out the adorable new Link’s Awakening Amiibo right here –you won’t regret it.