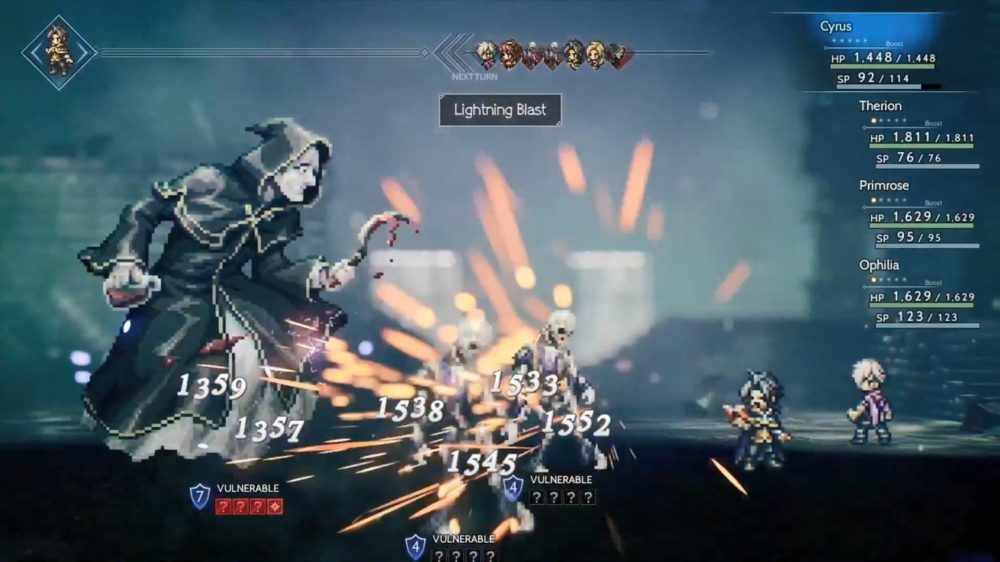 Over the past week, the RPG Limit Break 2019 marathon showcased a good number of RPG speedruns. On the last day, we got to watch Twitch streamer jelloknifee complete a full speedrun of Octopath Traveler, showing off the very tough, post-game Galdera fight as well.

RPG speedruns aren’t always that exciting to watch, primarily because they can take so long, and it’s rare that you’ll ever find any game-breaking glitches or neat tricks that allow you to skip entire sections of a game. RPG speedruns are often very technical, boiling down to RNG manipulation and step counts.

However, the Octopath Traveler speedrun from this past weekend somehow managed to remain captivating every step of the way, thanks to jello’s multiple menu-ing sequences done in a swift, smooth, and even almost trance-like state.

For those who might not know what menu-ing means, it’s simply a sequence of very methodical selections done within a game’s menu in the shortest amount of time.

For a game like Octopath Traveler, the menu sequences are intense because there are so many quick changes you need to do over the course of the run. This includes changing jobs between characters, changing equipment and weapons, and using items when necessary.

For the Galdera% speedrun, most of the main story fights are fairly straightforward, as the current strategies primarily involve making use of Soulstones to melt the bosses quickly. But even during this phase, there’s a ton of job changing happening.

For instance, the Merchant job is invaluable during these stages due to the Hired Help ability, so you’ll always want Tressa in your party, along with another character equipped with Merchant as a secondary job.

During certain fights, you might have Ophilia take on the Merchant role, but later on, you might need to put it on Olberic instead as Ophilia absolutely needs the HP/defense boost from the Warrior job.

Once you get to the post-game gauntlet of bosses, the menu-ing becomes even more intense.

Before you get to face Galdera, you have to barrel your way through eight bosses in a row. Before the gauntlet starts, jello puts his menu-ing skills on full display as we watch him equip each character with the appropriate class and right equipment.

In between each fight, there’s even more menu-ing action going on as we now need to have Therion in our party to prep him for the Galdera fight.

One particularly important detail of this Octopath Traveler speedrun is getting Therion to critical health during the boss gauntlet so that he can make use of an insane damage multiplier that comes with the Warmaster job for the final fight.

After finally completing the gauntlet, jello dives into one final menu-ing sequence —the longest one we’ve seen in this speedrun so far.

First, Therion needs the Warmaster job. Secondly, everyone needs to be re-classed into their appropriate jobs. Next, everyone needs to spend a ton of JP to get key passive skills such as Patience, which gives you a 50% chance of getting an extra move at the end of a turn.

Finally, Olberic needs to be fed a ton of speed boost items to increase his chances of going first during the second phase of the Galdera fight.

Even with this big menu-ing sequence, which pretty much goes off without any noticeable hiccups whatsoever, jello states that the strategy is still somewhat dependent on luck. With an unlucky or horrible turn order, the Galdera fight can go south very quickly, resulting in a severe time loss as you’d need to fight through the boss gauntlet again.

During his first attempt at Galdera, the first phase went off without a hitch. And in the second, Therion was last on the turn order, which is good! Right?

It’s not till we get to Therion’s turn that jello realizes he’d forgotten re-equip Therion with the appropriate equipment during the menu-ing sequence, which likely explains why he went last in that turn order. That small slip-up in the menu-ing resulted in a party wipe.

Thankfully, though, jello nailed the major menu-ing sequence just right during the second attempt, and the fight went by considerably smoothly.

Even with a good strategy in place and a nice set route for a speedrun, the menu-ing in Octopath Traveler is one of the trickier details to navigate as the sequence of button presses aren’t always 100% the same.

Your weapon loadouts could change depending on whether you got the drop you needed from a particular boss; if your drops aren’t consistent, your menu-ing sequencing is going to change, and you’ll need to think on your feet while also trying to get through the menus as quickly as possible.

There were tons of excellent speedruns showcased during this year’s RPG Limit Break, including Shadow Hearts: Covenant and the insane 10-hour run of Final Fantasy X, but none were quite as exciting to watch as the meditative beeps and boops of Octopath Traveler’s incredibly precise menu button presses.

You can check out the full five-hour run of it down below.