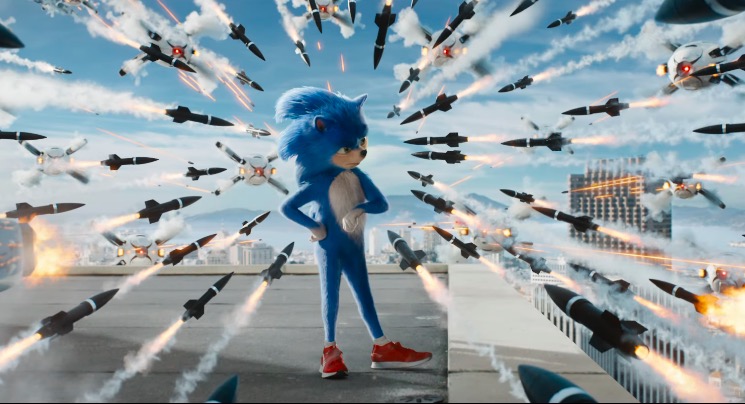 Finally, the first official trailer for Paramount Pictures’ live-action adaptation of Sonic the Hedgehog is here for all to see. All of the leaks were correct, as Sonic looks very strange sporting human-esque hands, eyes, and pretty much everything else. In the trailer, we get to see Jim Carrey as Dr. Robotnik and Ben Schwartz (Parks and Recreation) as Sonic himself.

To be completely honest, the trailer doesn’t look as bad as we initially thought it was going to. Sonic looks exactly like a live-action version of him would look like, and Robotnik seems to bring the comedy thanks to Carrey’s goofy lines.

While this live-action adaptation of the famous video game character doesn’t look as fleshed out as say, Detective Pikachu, the movie doesn’t look completely horrific… right? Well, how about we go on Twitter and check out other folks reactions to the Blue Blur. Let’s see what we got here… oh wait… yup; the internet hates it –just what we thought.

It looks like Sonic fans are getting the movie they deserve.

What better song is there to represent the Blue Blur?

Pop Quiz; Whenever you think of #SonicTheHedgehog what song do you associate with it?
Green Hill Zone, Seven Rings in Hand, or even the Sonic Hero’s theme?
Whatever you though is incorrect because, it’s clearly Gangsta’s Paradise. #SonicMovie pic.twitter.com/F3jvibxP2m

That ring effect was pretty cool.

This is the best part of the Sonic movie trailer. pic.twitter.com/PL4unJawij

As a huge fan of Jumanji, I feel attacked.

Sonic looks like the kid that turns into a monkey in Jumanji #SonicMovie pic.twitter.com/HODVYsKqRc

I don’t recommend doing this. How about just not watching it?

Is this the Portal sequel we’ve been waiting for?

Oh and for some reason all of a sudden, rings are now portals #SonicMovie pic.twitter.com/LSezZASNIa

I noticed Sonic is now wearing socks with his shoes in this poster for the #SonicMovie. Still has the gloveless hands though. pic.twitter.com/pe9WmQzz1M

Jim Carrey will carry this movie –just you wait.

I kinda respect that, after years of attempting serious roles, they uncorked The Old Jim Carrey for the fucking Sonic Movie pic.twitter.com/SM6ZMig6Jv

What if Tails makes an appearance? He’ll probably look just like this if so.

So about that sonic trailer 😐🤨😥 pic.twitter.com/ITPMNLFciM

Presenting Sonic, but if he had teeth like a real hedgehog pic.twitter.com/eyOQZNvF2T

This kid is very upset.

You can believe whatever you want but just look at the eyes.

you nailed it sonic movie I don’t see any difference pic.twitter.com/j1xapOI1T0

Wow. That’s how they came up with the idea of giving him human teeth.

I feel ya girl.

I haven’t really slept in days, so I have no idea what parts of the sonic trailer are real and what parts are just continued delirious images from my nightmares.

Congratulations Sonic 06. You are no longer the worst Sonic product. pic.twitter.com/DSVWKyNKIT

That’s uhh… a lot of missiles.

How it feels to be a sonic fan. pic.twitter.com/z3AsRp40D0

Anyways, we can’t wait until Detective Pikachu comes out!

sonic looks bad so look at charmander instead pic.twitter.com/1HGWMjJ9fO