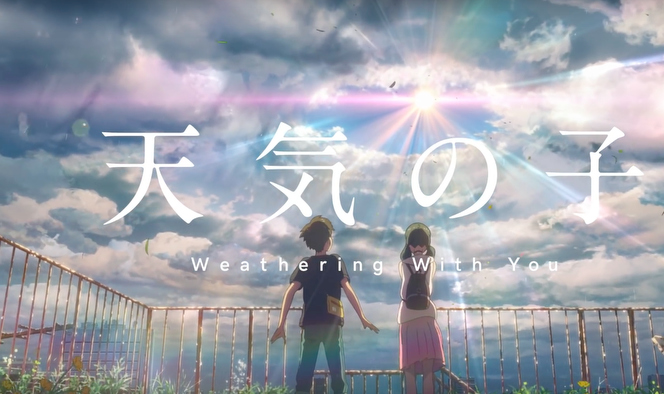 “Weathering With You,” the next feature film from “Your Name” writer and director Makoto Shinkai, has received its first trailer teasing the film’s premise, animation and theme song.

Streamed on YouTube via the film’s official website, the trailer shows off the film’s Rain-drenched Tokyo setting and main characters Hodaka and Hina, all animated in jaw dropping detail.

Precipitation runs along glass panes and bounces off the surface of umbrellas, while light filters softly through the cloud cover in scattered patches.

It all culminates in Hina revealing her supernatural ability: She can stop the rain at will, halting the water droplets in mid-air before clearing away the storm clouds above.

This is all set to the film’s theme song “Ai ni Dekiru Koto wa Mada Aru Kai” sung by RADWIMPS, the same band who provided the theme song for Shinkai’s previous film “Your Name.”

Set for release in Japan on July 19, the film follows Hodaka, a high school student writing for a shady occult magazine after he moves to a Tokyo beset by rain from an isolated island.

By chance, he encounters Hina, a girl taking care of her younger brother on her own who also has the ability to stop the torrent of rain with a mysterious power.

This draws the two together for an experience both are deeply impacted by, and which will continue to impact them long after it’s over.

The film is Shinkai’s follow-up to the massively successful “Your Name,” a romantic drama anime with supernatural elements. The movie became the second highest grossing anime film of all time worldwide with an estimated $355 million gross.

Though “Weathering With You” doesn’t have a confirmed release date outside of Japan at this time, it has been confirmed to be receiving a worldwide release.