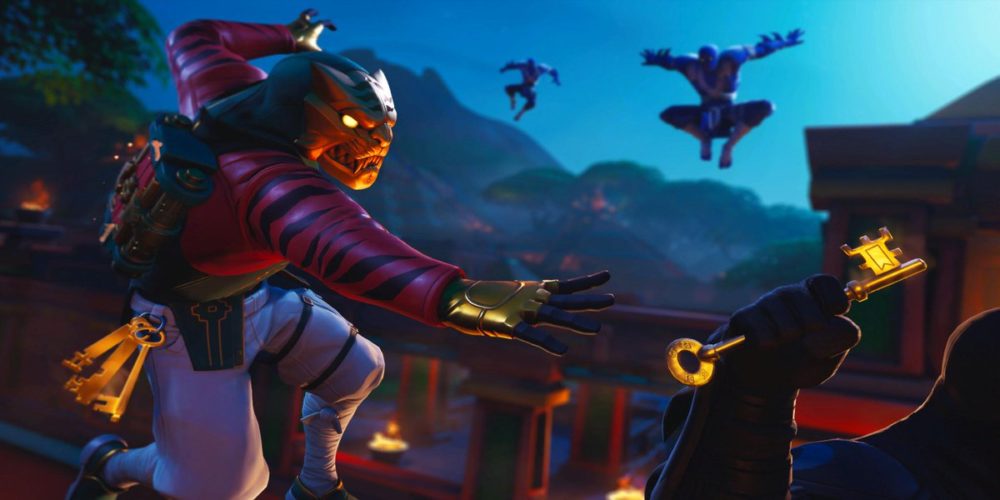 Upon completing all of the week 6 challenges in Fortnite Season 8, players will be able to track down the location of the week 6 secret banner. Though it’s not quite as great as a free tier on your Battle Pass, it’s still a pretty cool cosmetic to show your commitment to the game. Here’s where to find the season 8 week 6 secret banner in Fortnite.

As is always the case, the loading screen provides a little clue as to where we’ll be able to track down the secret banner itself. So, let’s start off by checking the week 6 loading screen out first.

At first, it might not appear as though there is a clue to be found here, but the key to this loading screen is… well… the key! Specifically, we’re looking at the one on the right of the screen in the hand of some mysterious character. If you look on the actual key end itself, you’ll see a little banner icon. Looking at the other end of the key around the hole, you’ll also be able to spot some coordinates.

These coordinates are F2, F3, E2, and E3. As such, we now know roughly where we need to be searching for the secret banner.

Unfortunately, there’s currently a little uncertainty as to exactly where the week 6 secret banner is going to land. That’s because there doesn’t appear to be the telltale dirt patch that normally marks where you’ll find a secret banner or secret star.

Heading directly to where these coordinates meet puts your right on a path, so it’s possible that the secret banner could appear here. However, what’s more likely is that the secret banner will appear by the nearby Moai Statue just southeast of this coming together point. We’ve provided screenshots both above and below to help you track it down.

If this turns out to be incorrect, we’ll be sure to update this post and provide the exact location to help save you some time digging around. For now, though, we’re putting our money on the banner appearing between the two rocks, on the large dirt patch just in front of the Moai Statue.

That’s all you need to know to track down yet another secret banner in Fortnite. For more tips, tricks, and guides for the current season, be sure to check out our ever-expanding Fortnite Season 8 guide wiki. We’ve also linked all of our other week 6 challenge guides down below for your convenience, in case there are any others that have you a bit stuck.

Fortnite: Where the Season 7 Week 6 Secret Banner Location Is