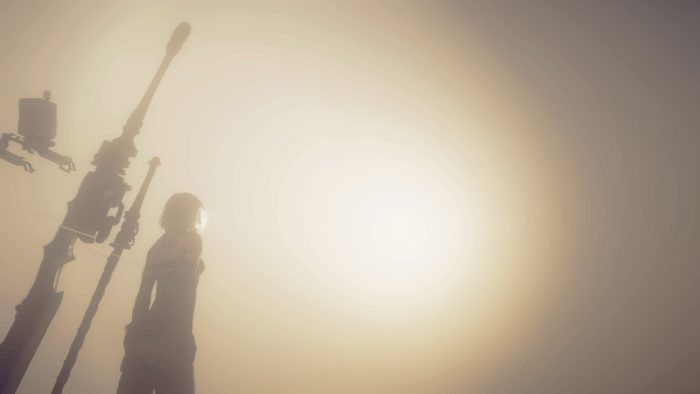 Stop me if you’ve heard this one before. Humans have created robots to do their dirty work for them, and these robots are meant to be nothing more than glorified servants with no feelings or emotions. They’re not human, after all.

However, as time goes on, and after prolonged exposure to our world and human behavior, these robots start to develop new behavioral patterns themselves and begin to behave in a more human-like fashion. Lo and behold, robots do have emotions after all, and they might even be more human than human.

It’s an age-old idea that’s been explored time and time again in the science fiction genre, and it’s also a discussion that’s never truly been satisfactorily resolved. Sci-fi ideas and tropes are getting stale at this point. Whenever a story questions whether a robot has the capacity to feel like a human does, the answer is always a resounding “Yes.”

Because, y’know, if the answer was no, that wouldn’t make for very good storytelling.

In the realm of video games, that trope continues to be explored, but not always satisfactorily either. Quantic Dream’s Detroit: Become Human immediately comes to mind as an entertaining, yet ultimately shallow ‘study’ of androids and their ability to feel.

There’s very little and very insignificant build-up to Detroit’s inevitable positive affirmation of the question, and the game quickly devolves into an action-packed QTE fest.

There is, however, another game that also arrives at the same inevitable answer that Detroit and so many other games and movies do. The difference being that the way it explores this idea actually feels refreshing and innovative, with just the right amount of big-brain thinking and philosophy to go along with it.

Directed by the eccentric Yoko Taro, NieR: Automata is every bit as quirky and strange as you’d expect from a project from Taro.

Androids dressed in fancy black anime-esque clothing with matching blindfolds? Cute machines trying to hump each other? NieR: Automata instantly gives off the vibe that it’s all style and no substance, but that couldn’t be further from the truth.

The reason why NieR: Automata manages to revitalize a tired and worn out discussion in the sci-fi genre is simple: the game makes its characters suffer. Very cruelly so.

Oh, spoilers ahead, by the way.

Bypassing the Question of Whether Androids Have Emotions

Right from the prologue, it’s immediately obvious that yes, they do have emotions. Even as 2B stoically tells 9S that “emotions are prohibited,” not 15 minutes later, she experiences an outburst of emotion when she sees he’s been critically injured.

All throughout NieR: Automata, the machines and androids all display human behavioral patterns to some degree. Instead of focusing on whether they have emotions, the important question here is how do the androids deal with having emotions, and why they have them in the first place?

This is an infinitely more interesting question to ask because there’s no easy answer at all. Even in Automata, the game doesn’t really give a satisfactory answer to that question either. But that’s fine, because the answer isn’t the important part; it’s the discussion that surrounds it.

All of this boils down to the central themes of NieR: Automata: the existential crisis that all the characters go through, and the immense suffering that comes along with it.

NieR: Automata’s Philosophical Take on Life, the Universe, and Everything

You see, the characters in Automata don’t just go through plain ol’ hardships like having to leave home at a young age, or being burdened with the responsibility of having to save the world. These characters really suffer. They think about their purpose, the meaning of life, and they suffer for it. And no, the answer is not 42.

There’s constant tongue-in-cheek commentary on how some of these philosophers have eventually gone mad after pondering too hard on the meaning of life, even to the point of mimicking some of their real life behavior with the in-game machines.

Every single character in NieR: Automata has a purpose. Whether it’s a main character or a random NPC who gives you a side quest, all of them have a singular purpose in life, and they’re determined to fulfill it no matter what. But what happens when they fail to do so?

They internalize their failures, they think about what went wrong, and when they conclude that their failure equates to a loss of purpose, they go through a mini existential crisis of their own.

And then, they willingly kill themselves by self-destructing. You see this so many times throughout the game that it honestly becomes kind of horrifying when you really think about it.

With the main characters, this crisis slowly manifests itself as the story progresses. 2B herself remarks on how she’s trapped in a never-ending cycle of life and death. She questions her purpose in this war, wondering if she’ll ever be able to kill the god who put her through this hell.

9S is trapped in his own personal hell as well, even if he doesn’t realize it. A2 is the only android who attempts to break free of the cycle of conflict, but even she is constantly tormented by her own existence as she coasts around without a purpose, haunted by her past role in the war.

All these characters eventually reach a breaking point when things fall apart and there’s no more purpose to live or fight for. This is clearest with 9S, who’s completely unable to cope with his newfound knowledge of the never-ending war and 2B’s secret task of having to kill him over and over again.

And how does he manage his emotions once he realizes the androids don’t really have anything to fight for? He resolves to seek revenge for 2B, then kill himself. Because self-destruction is the only way these robots know how to escape from the crisis and suffering they’re going through.

Story is certainly one of NieR: Automata’s strongest aspects, as the game takes its time to build up the robot community and establish the different factions in the world. Going even beyond that, however, Automata also makes a concerted effort to weave its core themes into the gameplay itself.

Nowhere is this more clear than with how the game’s save system works. Saving your game isn’t just a matter of recording progress; in game terms, 2B and 9S are actually uploading their memories to a bunker. Should they fall in battle, they’ll be issued a new physical body with the latest version of their memories stored in them.

Automata also features a death pick-up system, which I used to compare to Dark Souls, but have since realized that its purpose is much different from that. Dying and continuing in this game isn’t a case of reloading a save, it’s you getting a new body, and going back to your old discarded body to pick up anything you might’ve left behind.

At least for the first two runs of the game, there’s no such thing as reloading a save. You only get new bodies. This, again, ties in with the idea of cycles. If there’s no death, only war, then how do you escape that cycle once you realize that the war you’ve been fighting in has been meaningless the whole time?

The answer is, you can’t, except maybe by self-destructing a whole bunch of times and hoping it finally sticks.

At the end of it all, though, NieR: Automata opts to end its story on a hopeful note. In spite of all the pain and suffering and despair these characters have gone through, Taro chooses to remain optimistic with his outlook on life.

The androids have emotions because they were modeled after their human creators. Automata’s explanation is that they naturally absorb the feelings and burdens of their masters, ultimately becoming more human-like themselves, even if they’re constantly told that emotions are prohibited.

The androids deal with their emotions like any human being would. Except without the self-destructing, of course. At the end of the game, the player is literally handed the power to break the game’s cycle of war and conflict, by giving the main characters a second chance at life.

The monotonous Pods make sure to reiterate that nothing in life has changed, and the world is just as bleak as it’s always been, yet that doesn’t mean life has to be full of despair all the time.

The philosophical takeaway here, if you can call it that, is that life is a constant series of embarrassments and moments of awkwardness, and there’s no real answer for dealing with it in a flawless manner.

Maybe the idea of “purpose” doesn’t have to be so crucial to the existence of a being, and maybe androids can deal with life in the same way that humans do: by taking things one day at a time.

Maybe the secret underlying message of this game is that humans themselves should not get so fixated on a singular goal in life, and maybe it’s okay to just take things as they come sometimes. Nudge nudge, wink wink.

In one fell swoop, NieR: Automata discards all the well-worn tropes and questions about robots being in touch with human emotions, and turns it on its head.

The game decides that it doesn’t matter if you’re human or machine; the existential crisis is real in all beings, and whether machines have emotions or not isn’t the important thing here. What’s important is how they choose to process these emotions.

NieR: Automata definitely benefits from having such established world-building, starting all the way from the original Drakengard game to the first NieR. Taro has had a ton of time to plant the seeds of his main ideas about humanity and the pain that comes with simply existing in a flawed world.

Even so, I have no qualms about calling NieR: Automata the most refreshing sci-fi game of this generation, or even of the past decade, because of how well it tackles these age-old questions that have been tossed around the genre, and putting a neat philosophical spin on it.

The answer that the game arrives at is shockingly simple, but also moving and even kind of meaningful.

NieR’s androids do dream of electric sheep, and this game is all about what they choose to do about those dreams.