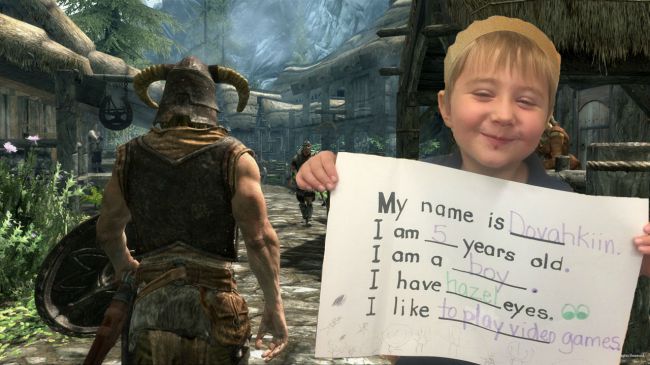 Approximately nine months before Skyrim’s release on 11/11/11, Bethesda promised an “unknown reward” for any super-fan who could complete the life-changing challenge of naming their baby “Dovahkiin.”

The baby had to “release” on the same day as the game, and be given the moniker of the legendary Dragonborn as their official first name– birth certificate proof required!

Megan and Eric Kellermeyer stepped up to the challenge, and delivered a healthy baby Dragonborn on 11/11/11 while everyone else was busy designing their character. The Skyrim publisher delivered too, with a lifetime supply of free Bethesda releases for the household.

GamesRadar caught up with the family in 2018, and reported that aside from internet trolling and occasional mispronunciation, Dovahkiin Tom Kellermeyer is doing well.

The young Dragonborn was in kindergarten when the article was published, and his mother reports that “everyone” likes the name. She goes on to add: “I admit I was struggling to find the perfect name for our son until I tried on Dovahkiin. I have never looked back.”

Well as long as everyone is happy I guess we should all be too! 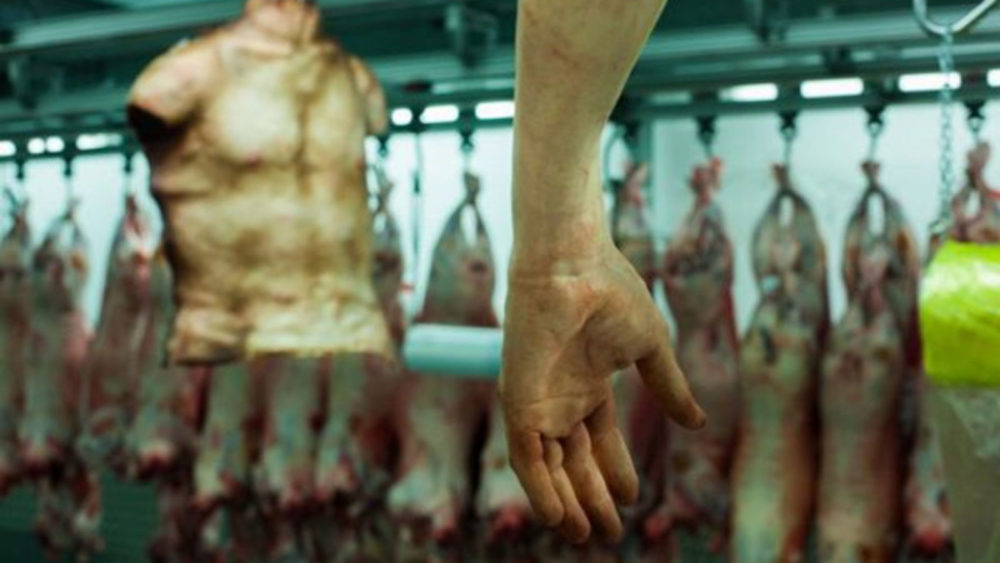 To promote the launch of Resident Evil 5 in early 2009, Capcom decided to scatter a selection of realistic-looking human carnage around London. Police and concerned citizens needn’t worry though– it’s just a treasure hunt!

Participants were tasked with finding and delivering the fake remains to locations near Trafalgar Square in order to earn points– specifically: “2 points for arms, 2 points for legs, 3 points for torsos, 5 points for a head. The more body parts you find and bring,” read the official challenge rules, “the more points you get.

The player(s) with the most points by 11am win [a] trip to Africa.”

As you might’ve guessed, police were called when contestants raised the severed limbs above their heads and shouted “Kijuju” (as the challenge dictated) on Westminster Bridge.

In addition, many of the props used in the treasure hunt were never returned, which Capcom claims “can be dangerous” as uncooked chicken livers “were used for added gore”.

Capcom used realistic human corpses again in 2012 to promote Resident Evil 6, but this time, in a much more organized and contained fashion. 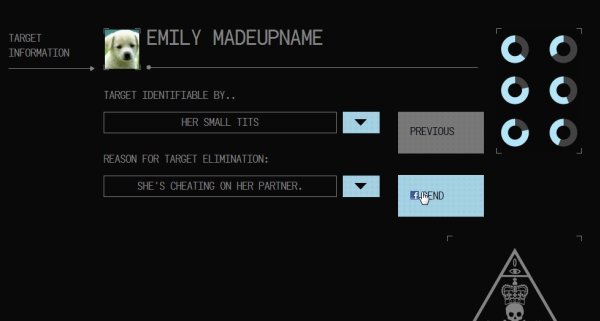 Hitman Absolution is a mature game, with mature, fictional themes. But it’s just that, a game, and one that carefully manages a delicate (and usually successful) balance of humor and murder.

However, when publisher Square Enix encouraged real-life people to make (albeit absurd) real-life hits on their Facebook friends, the publisher ended up in hot water.

Square-Enix hoped to generate hype for Hitman Absolution with a custom-made promotional website. On this site, users could create and send a unique death-threat directly to their Facebook friends.

In addition, if a game about killing your real life friends wasn’t dicey enough, the app offered a selection of distasteful options for the description of the “target”– including: “small tits,” “muffin top,” “tiny penis,” “hairy back,” and more. When the hit had been arranged, here’s what the Facebook notification would look like.

After the disparaging coverage it immediately received, the promotion was quickly taken down and Square Enix issued an apology:

“We were wide of the mark with the app, and following feedback from the community we decided the best thing to do was remove it completely and quickly. This we’ve now done. We’re sorry for any offense caused by this.” 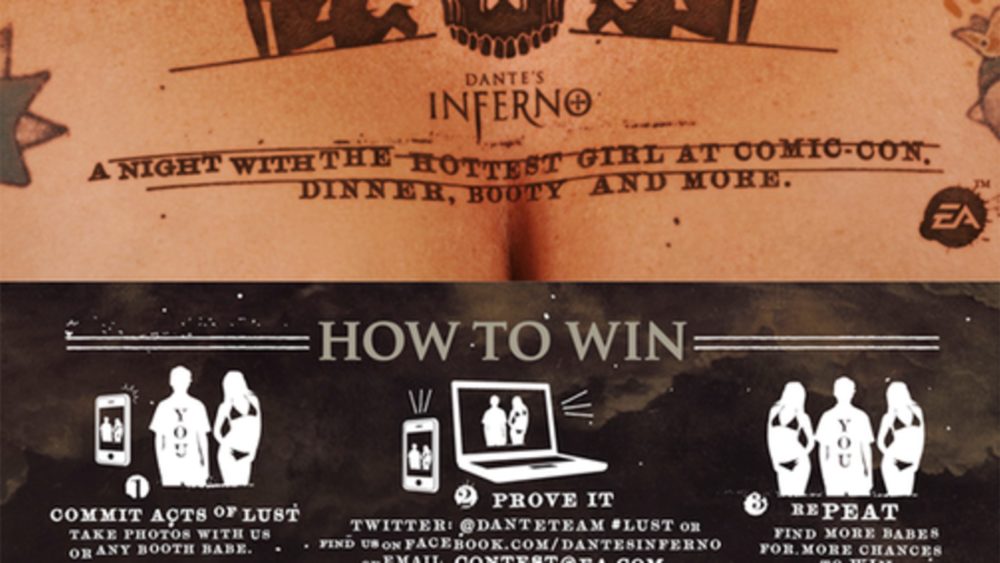 In a publicity stunt outside of E3 2009, EA hired people to pose as protestors upset about the subject matter of Dante’s Inferno.

The goal was to replicate the stereotype of fanatical, religious extremists, and the crowd of people holding signs like “EA = ANTI-CHRIST” was real enough to fool the LA Times and enrage a number of religious commentators.

To highlight the Lust “circle of hell” in Dante’s Inferno, the game’s publisher took their marketing scheme even further. EA’s “Sin to Win” contest promised “a night with the hottest girls at Comic-Con, dinner, booty and more.”

All participants needed to do was “commit acts of lust” with a “booth babe,” document it, and then blast it all over social media. EA also invited participants to “repeat” this process. Simply “find more babes for more chances to win,” the promotional material encouraged.

Predictably, outrage followed this promotion, along with a clarification/apology from the Dante’s Inferno promotional team.

The apology asserted that the language used in the promotional material was “tongue-and-cheek” in nature and that the aforementioned “night of lust” will actually be “a chaperoned VIP night on the town with the Dante’s Inferno reps.”

“We apologize for any confusion and offense that resulted from our choice of wording,” the statement went on to say.

Despite massive commercial success with legendary titles like the original Turok and Mortal Kombat II, publisher Acclaim found itself short on cash in the late ’90s/early 2000s.

As a result, Acclaim resorted to increasingly drastic PR campaigns to generate interest in the games the company was financing.

In an effort to transform people into “walking billboards” for a year, Acclaim offered $800 and free games to anyone who officially changed their name to “Turok” (to promote Turok: Evolution) for a year.

The publisher then upped the ante to $10,000 for any parent that formally named their child after the dinosaur hunter. Perhaps this was the inspiration for Bethesda’s Dovahkiin contest?

Needing another big hit, Acclaim’s marketing department got back to work, and coined the term “deadvertising” to promote 2002’s Shadow Man: 2econd Coming. Since death is one of the game’s central themes, Acclaim offered to pay for advertising space on the tombstones of the recently deceased.

“It’s a dark, gory type of game,” a spokesperson for Acclaim said, “and we thought it was appropriate to raise advertising to a new level.”

The spokesperson also claimed that it was an offer that might “particularly interest poorer families” as the ad-space will provide “a subsidy to burial costs to give their loved one a good send-off”.

The amount Acclaim was willing to pay for the ad-space depended on how much exposure potential the tombstone might generate. However, the promotion was later canceled and written off as merely “an early April Fool’s joke”

Next, to promote Burnout 2 in 2002, Acclaim attempted to generate interest by promising to pay for any and all speeding tickets their UK-based players earned (in real life) on the game’s release day. After disapproval from the British Department of Transport, the plan was canceled.

And finally, a marketing stunt for Virtua Tennis 2 led to the creation of “flying billboards”. Pigeons are a frequent sight at Wimbledon, which inspired Acclaim to have 20 pigeons spraypainted with the logo of their 2003 tennis game.

In addition, Acclaim made sure that the birds were “specially trained to go straight for the fans [to] flap their logos in front of them,” VP of marketing Larry Sparks explained.