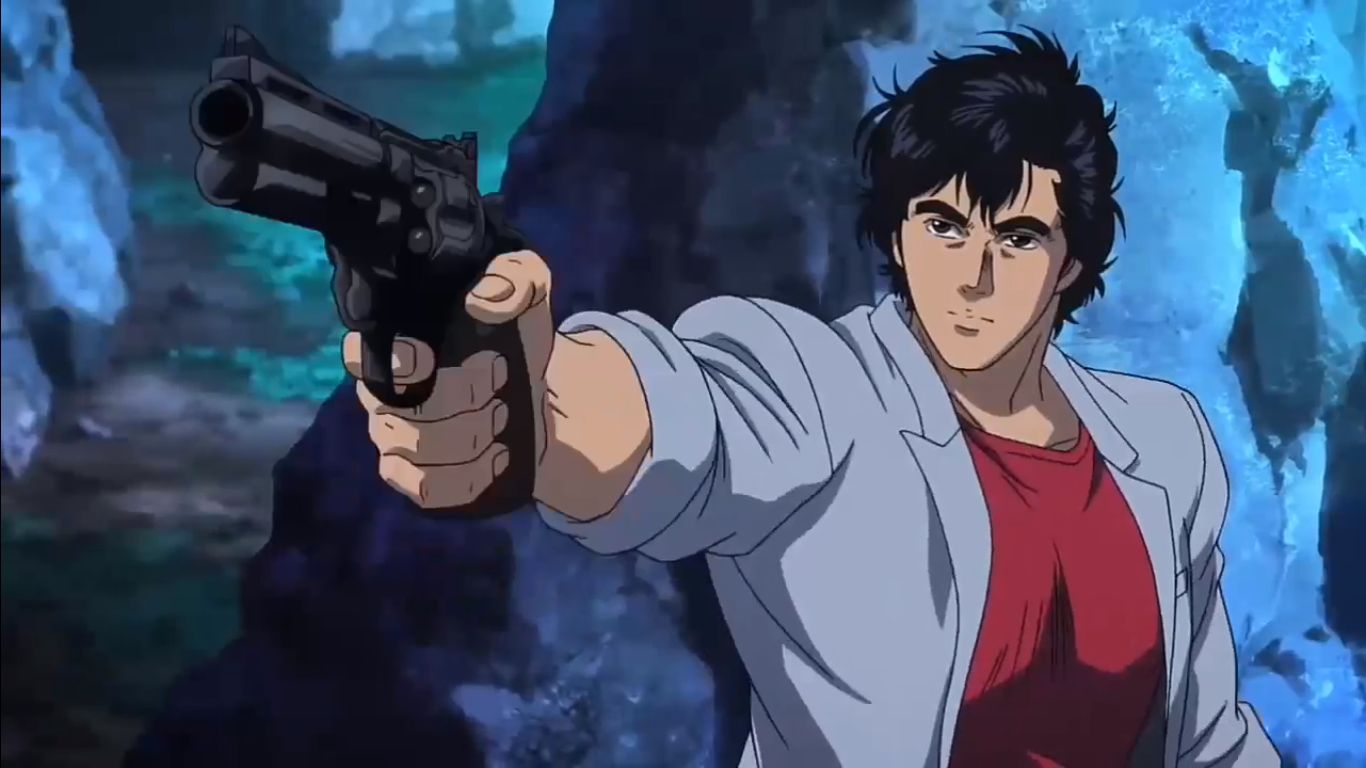 It has been a long time since the last animated outing of the City Hunter manga by Tsukasa Hojo, but just before his upcoming appearance in Jump Force, Ryo Saeba is back with a vengeance with a brand new theatrical anime movie titled City Hunter the Movie: Shinjuku Private Eyes.

The movie premiered yesterday in Japan, and of course, I had to go watch it at the Godzilla-decorated Tohou Cinema in Kabukicho, Shinjuku.

There is something rather special about watching a flick exactly in the location where it’s set.

That certainly didn’t disappoint considering that the first scene of the movie portrays exactly the plaza in front of the theater, with Ryo saving the Godzilla statue and the surrounding tourists from a rocket launcher-wielding goon.

This is certainly an important element in this film: the series from the late 80s and early 90s have been translated to the present day. It’s not like Ryo, Kaori, and their friends are now in their sixties. As a matter of fact, the cast hasn’t changed at all. A bit of cinematic magic has been used to make them travel in time (figuratively).

It actually works quite well. Shinjuku and its somewhat seedy underbelly of Kabukicho (which you’ll also know from the Yakuza series) have changed a lot over the past few years, but many things have stayed the same.

The dingy neon signs drawing customers into questionable establishments, the many love hotels where couples seek privacy, and the cramped but colorful bars of Golden Gai are still there, making the transition to the modern day more natural than one would expect.

Of course, many things have also changed. Phone booths have been replaced by modern smartphones and Ryo has different enemies to tackle.

Interestingly the main threat this time around is represented by unmanned drones, which appears to be a very recurring theme in Japanese media nowadays, as shown by Ace Combat 7: Skies Unknown and more.

While the enemies may be new, the gang of friends is exactly the same. We get to see Saeko, Umibozu, Miki, and the colorful crowd of Shinjuku, which may be wielding smartphones but hasn’t changed all that much.

We’re also treated to a cameo of the protagonists of Tsukasa Hojo’s Cat’s Eye, but unfortunately, this is little more than fanservice. You could say it’s the only aspect of the movie I found really disappointing, as they don’t really do much.

The other slightly problematic element is that a lot of the voice actors have audibly aged. While Kazue Ikura (Kaori) and Harumi Ichiryuusai (Saeko) are fantastic actresses, their voices don’t easily stick anymore to the faces of characters who are half their age.

Incidentally, don’t expect Ryo to have adapted to modern trends. His “mokkori” hasn’t changed at all, as much as the swift justice delivered by Kaori with her 100-ton hammer.

Our eternally young protagonist is still chasing every skirt he sees, and he winds up beaten and tied up inside a futon like salami as a consequence. It’s City Hunter all right.

Of course, the other side of their relationship is also present, with that tender complicity made of things that are hidden just under the surface (and that everyone can see), but don’t need to be said.

The action is also pretty similar to what you remember: Ryo, Umibozu, and the rest of the gang are still as over-the-top as ever, wielding their signature weapons like the Magnum, rocket launchers, and more like extensions of their bodies, and dodging explosions like they were confetti.

While we’re presented with pretty much all the old interactions, after almost two decades of absence they certainly don’t feel overdone. As a matter of fact, they’re a pleasant trip down the memory lane for the fans of the series.

On the other hand, considering Shinjuku’s persisting microcosm that mixes old and new, even those who have never experienced the franchise will probably be able to enjoy the gags without being dragged into the uncanny valley.

That being said, they’ll miss a lot of references and fanservice. This is certainly a movie made for the fans and not to open the series up to new audiences.

Ultimately, City Hunter the Movie: Shinjuku Private Eyes is a pleasant trip down the memory lane with modern elements sprinkled all over the place. Yet, they don’t really change the essence of the original manga and anime.

This is unmistakably and un-apologetically City Hunter, and fans of the series will likely love it.