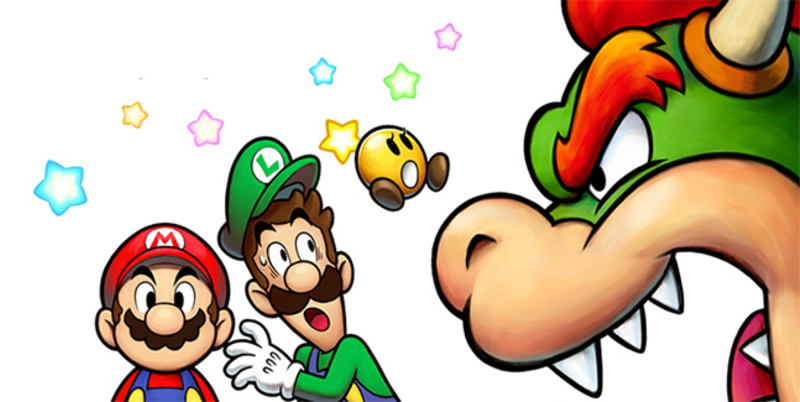 It has been ten years since Mario & Luigi: Bowser’s Inside Story first came out on the Nintendo DS and when it did, it received nothing but positive reception thanks to the comedic writing, excellent interactive active turn-based combat system, and the premise that throws Mario and Luigi inside of Bowser’s body.

This updated port of the fan-favorite in the RPG series doesn’t take many liberties in terms of changing around the overall experience, but why fix what ain’t broke?

The premise of Bowser’s Inside Story remains the same as a disease called “The Blorbs” begins to spread across the Mushroom Kingdom, causing all of the Toads to enlarge in size, making them unable to move or do anything besides roll around in place.

It’s quite hilarious as the Toads act like this disease is deadly, with all of them screaming and yelling in fear, but this disease is not deadly at all, but still, it must be remedied.

Princess Peach calls a meeting in the castle to talk about this epidemic and try to find a fix for it all, but of course, Bowser comes in ruining the entire meeting and eventually gets beaten up by Mario; no thanks to Luigi, as he has fallen asleep during the gathering only to be awoken once the battle has finished.

Anyway, Bowser ends up in the woods and gets tricked into eating a poisonous mushroom that makes him swallow up most of the main characters in the Mushroom Kingdom, including Princess Peach, Mario, Luigi, Starlow (a star sprite that aids Mario & Luigi), and some of the toads.

Working together with Mario and Luigi, Bowser (unwillingly) must save the Mushroom Kingdom to defeat the evil villain, Fawful, and cure the toads of “The Blorbs.”

When you control Mario and Luigi inside of Bowser’s many different parts of his body, the game is a 2D-sidescroller of sorts, with the duo investigating and going around attempting to help Bowser with his ailments and situations that happen on the outside world when you play as Bowser.

For example, Bowser finds himself in many situations that require his strength to be powered up past his limits.

So Mario and Luigi might have to head to his arm control center to power Bowser up from the inside, in which a mini-game ensues that requires Mario and Luigi to hit color-specific orbs using their hammers.

Controlling Mario, Luigi, and Bowser on the field and in battles is a treat and feels just as good as the old Mario and Luigi RPG’s.

It’s turn-based, but you can dodge and counter-attack during your opponent’s turns, making the entire system really fun, interactive, and satisfying.

You have to watch out for visual cues and “tells” from the enemies to take them over and learn their movements to succeed.

I actually found myself loving Bowser’s parts of the game a lot more than Mario and Luigi’s, as he has an array of moves in and out of battle that just feel so darn powerful.

He can punch, breathe flames, roll around inside of his spiny shell, and just pretty much destroy everything in sight.

Battles felt quicker and more active as well, since the Koopa King is indeed more powerful than Mario and Luigi, even though he manages to be defeated by the duo time and time again.

Not saying that the Mario and Luigi segments were boring or uninteresting, but there were certain enemies that I straight-out ignored or refused to battle simply because I knew the fight was going to be either too long or just too difficult for Mario and Luigi to defeat in battle.

There is a lot of enemy variety though, so the combat kept me on my toes and kept me guessing as to how I was going to address the situation at hand.

Something that would’ve made battles a bit quicker would be the option to fast-forward during certain parts of battle, as there are enemies that simply just take forever to perform their moves, to the point of being extremely monotonous.

A new addition to the game that I did appreciate though, was the ability to fast-forward through dialogue and cutscenes… like all of them.

You wouldn’t believe how often I found myself holding down that good ol’ R button to fast forward because believe me, there is a lot of chatter in Bowser’s Inside Story.

While the dialogue is quite cheeky and even had me laughing out loud at certain moments, there still is a lot of words to read and having that option was greatly appreciated, coming from someone who only played a few hours of the original Bowser’s Inside Story on the DS.

The slightly updated visuals and UI along with the new Bowser Jr’s Journey mode (which adds in a few hours of play) definitely makes this late 3DS title worth playing.

Alpha Dream, the developer behind the Mario RPG series, has outdone themselves with this one and has somehow made me admire Bowser more than Mario and Luigi for once in my life.

Playing through this game has also made me desperately want a standalone Nintendo game starring Bowser. It could be an RPG, it could be a platformer, or even a third-person action game – I don’t know! I really just want more Bowser in my life!

With the 3DS slowly but surely coming to an end (it’s been eight years now), Bowser’s Inside Story is a wondrous journey from start to finish, closing out with an epic final boss battle and is simply a must-play for any fan of RPG’s and anyone who wants to get a deeper look at who Bowser exactly is, like a really deep look.

You go inside of him, so it really couldn’t get any deeper than that.