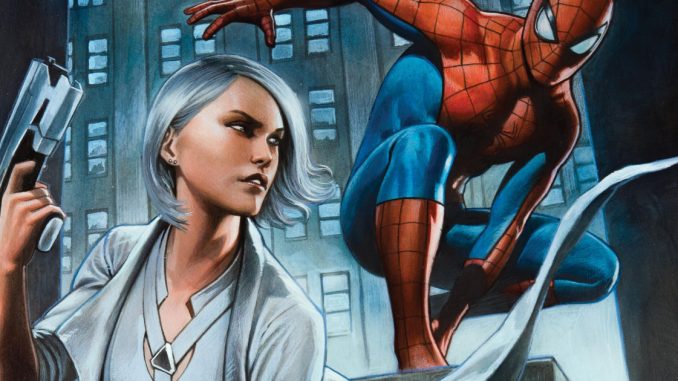 With Spider-Man’s Silver Lining DLC, the title’s ambitious post-game story comes to a head. Hammerhead has become even more powerful, and Silver Sable has returned to reclaim her stolen weapons and equipment. The stage is all set for a final epic showdown.

On the surface, Silver Lining gives you basically exactly what the previous two DLC chapters did. You get around three hours of new story focusing on a particular character, this time Silver Sable, along with three new suits and a handful of new crimes and sidequests.

Before we go on, the Into the Spiderverse suit added in deserves special mention as one of the downright coolest suits in the entire game, as it makes Peter look like he was ripped directly from the movie’s animation.

Silver Lining isn’t doing anything wildly different, but like the past two DLCs, it does take small steps to shake up the formula. This time around Spidey is teaming up directly with Silver Sable, and there are multiple battles where you’ll be fighting directly alongside Sable.

Each of these are fantastic combat encounters, and Silver Lining really ups the ante in terms of difficulty. Spider-Man and Sable also get some fantastic character moments, nothing as good as the Black Cat moments in The Heist, but still fun to see nonetheless.

Spider partnering up with Black Cat and Sable in these DLCs is particularly interesting to me. It very much feels like Insomniac is testing the waters for future ideas, and I could easily see a sequel that has Peter sharing the spotlight with another character that weaves directly into his story and gameplay.

I mentioned earlier that Silver Lining ups the difficulty, but it seriously has some of the most challenging battles I faced in all of Spider-Man. New hideouts pose a serious challenge throwing tens of enemies at you at once, and Hammerhead’s men now sport robotic suits that make them even more deadly to go up against.

The DLC isn’t afraid to throw each and every kind of enemy type at you at once, forcing you to really play defensively and use gadgets to your advantage.

Screwball’s challenges return once again with slight changes, like having to bust crates to find explosives and then throw them at her photobomb moments.

It’s the details, however, that really help pave the way for the future of Spider-Man and its various characters. I won’t spoil what happens but there are bits and pieces of development for Mary Jane, Peter, Miles, and Sable that all point to where we might see them going in the future.

The City That Never Sleeps, in general, has been building up Peter and Miles’ mentor-student relationship. Miles still doesn’t really step into his own, but there are some developments in his case.

Another particularly interesting piece of story in Silver Lining is a sidequest follows up on Yuri Watanabe’s story from Turf Wars. Without spoiling too much, it seems like Yuri is going to have a very interesting role in wherever Spider-Man goes next.

It officially brings an end to The City That Never Sleeps plotline and doesn’t leave any major questions hanging in the air, besides the ones established in the main game. If you’ve found yourself enjoying the DLC so far you’ll no doubt have fun with Silver Lining. Just don’t expect there to be any mind-blowing surprises.