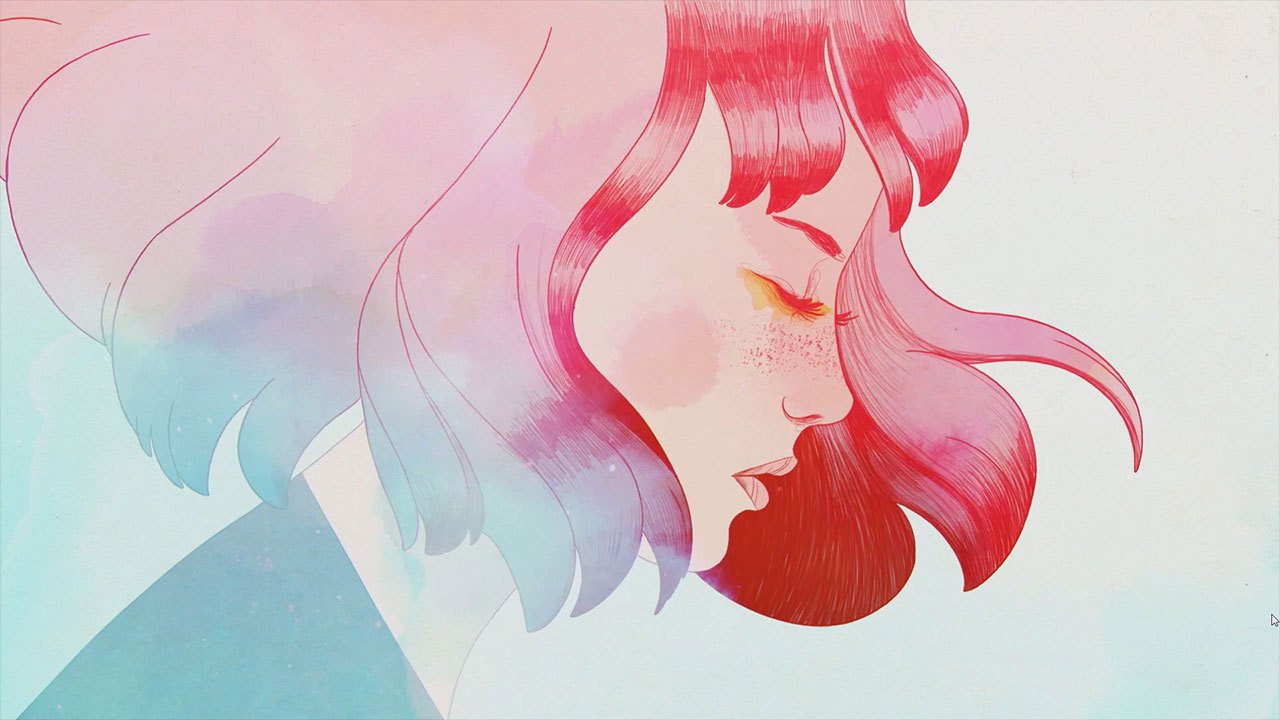 In Spanish, “gris” translates to “grey.” That little tidbit should be enough to clue you in to the game’s core and what it’s all about.

GRIS tells the story of a young girl trapped inside a world in her own mind. The world is devoid of all color, as you might imagine, and as you progress further, you’ll start to learn more about the pain and suffering the girl’s been through, and help her find some closure at the end.

As far as the story goes, GRIS makes no effort in spelling things out for you. It’s obvious that the girl’s just gone through some sort of traumatic experience, evident by the barren land inside her mind, and the broken statue of a mysterious long-haired female. There’s no dialogue in GRIS, and you have to piece the story together through subtle metaphors and sometimes confusing symbolism.

When it comes to gameplay, GRIS is much more straightforward. This is a 2D side-scrolling adventure with light platforming elements and environmental puzzle-solving. Each level introduces a new mechanic or ability that you can make use of, allowing you to get through increasingly complex puzzles.

The levels are linear for the most part, with a few side paths you can explore for optional collectibles. While there are some very slight Metroidvania elements where you’ll be able to go back to a couple of areas and use a new ability to access a collectible, GRIS is more concerned with funneling the player through its narrative.

This is probably the weakest part of the game, as the story itself is already rather short —I clocked in at around six hours because I’m bad at platformers, but more competent players would likely be able to clear it in less. And after beating the game, there was no clear way to backtrack and explore previous levels in the game for collectibles I might’ve missed.

The collectibles themselves feel largely superfluous as well, considering that they don’t exactly offer more insight into the story, or enhance the girl’s abilities in any way. These are mostly reserved for the more ‘hardcore’ platformer fans who are looking for a challenge in the game. For the rest of us, though, there’s little incentive to actually go for these extra items.

And yet, despite its short run time, GRIS manages to be utterly compelling for those few precious hours of story. Each level is accompanied by a melancholic soundtrack and a specific color theme. For every level that you manage to clear, you’ll restore one color to the girl’s world, and there’s no greater pleasure in this game than watching the world slowly get restored to beautiful vibrancy.

The platforming in GRIS is fairly forgiving; you won’t find yourself having to make insanely tight precision jumps here, and there’s no worry of losing lives either, and having to restart from a checkpoint. That’s largely because there are no enemies or combat to speak of in GRIS. The meat of the gameplay lies in the environmental puzzle-solving, and that’s where the game really shines.

Every obstacle in GRIS is indicated by the number of light orbs you need to gather in order to progress. Each light orb is gated off by a small puzzle, which you’ll then need to solve in the immediate area.

As you gain more abilities —the power to turn the girl’s dress into a cube to fight against the wind, and the power to swim and dash, for instance— these puzzles grow in complexity. GRIS takes its time in gradually introducing new mechanics as well, so you’ll never feel like there’s too much info to take in at once.

Some of these puzzles are real brainteasers, too, as the later levels can trip you up as you try to figure out the correct pathway or ability to use in order to progress. Some puzzles do require you to pull off tricky jumps, but as I mentioned beforehand, they’re not quite as intense as in games like Celeste or Super Meat Boy. GRIS is chill and inviting in a way that encourages players to think and consider their next move, rather than constantly trying to beat their heads against a wall, trying the same jump over and over again until you finally get it right.

While there aren’t any enemies to fend off in this game, GRIS does feature some exciting ‘boss’ sequences, which are essentially big puzzle segments in and of themselves. Some might simply require you to figure out the best path to take while running away, a la Celeste, while others require you to make use of your abilities to quickly solve environmental puzzles to get out of the area.

All the while, GRIS excels in delivering a sense of atmosphere through its stunning presentation and piano-based soundtrack. The music is appropriately relaxed for most of the levels, and it swells whenever you’re in an intense sequence. The game itself is just so breathtaking, it can be difficult to tear your eyes away.

GRIS’ design looks like it was ripped straight out of a watercolor painting. Every shot in this game looks like it could be a pretty painting that you’d hang up at home, and as you restore more colors to the world, the game gets even more vivid and beautiful, if that were possible.

As a one-off experience or one-time playthrough, GRIS is certainly one of the most artistic and provocative experiences I’ve seen in video games. While I would’ve liked to see a more fleshed out world, with meaningful collectibles and more puzzles to solve, GRIS is still worth a look for anyone who has an interest in platformers or silent stories.