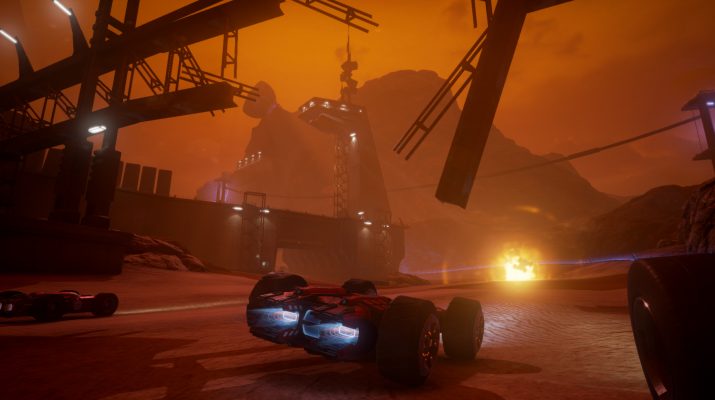 Older gamers may remember a time where the arcade was king for community fun. Whether that was the familiar vibe of pizza parties or the more dedicated arcade scenes, a constant crowd gathered around the hangout’s racing machines. Proving superiority to friends balanced with the feeling of speed to popularize what these immersive experiences provided.

GRIP: Combat Racing seeks to remind gamers why these experiences were so novel back in the day. Whereas franchises like Forza and Need For Speed have moved on to provide variety in their content packages, GRIP’s ties to these nostalgic arcade days make the differences stark when compared to other racing titles.

Make no mistake – that’s where the game’s hook lies.

In GRIP: Combat Racing, it’s all about speed, baby.

Building and maintaining momentum remained GRIP’s greatest strength, even hours after my first initial races. When I briefly glanced at the speedometer showing numbers well above triple digits, a smile crossed my face as I realized how much that speed registered with my experience.

From that feeling of speed, I explored what GRIP: Combat Racing had on offer.

To start, vanilla races in GRIP felt a lot like modern Mario Kart. As players maintained their position, power-ups became available on the field to provide speed boosts and weapons.

After a good tutorial introduced me to GRIP: Combat Racing’s various mechanics, the campaign and the other modes opened up. Divided between five traditional, three arena, and a single Carkour style session, GRIP appeared to have a decent variety for bountiful playtime.

But after hours spent drumming through a directionless campaign devoid of context, the paint began peeling off, and GRIP’s budget origins made its flaws incredibly apparent.

Even racing through tracks at speeds exceeding 500 mph couldn’t hide the bland, often ugly tracks and set-pieces. Weapons, speed boosts, and engine noises turned what should have been an adrenaline romp into dull monotony. Overbearing motion blur and omnipresent film grain sought to hide what I could only describe as plastic-looking cars.

As I gained rank through completing races and other events, the blocky design of the cars seemed much too generic as time went on. Though each new car adhered to different statistical allocations, each body looked nearly identical. Even with the option to change colors, add decals, and affix new rims/wheels, the customization felt uninspired and unexciting.

Once all of these flaws came to mind, thinking of GRIP: Combat Racing as anything other than a forgotten Hot Wheels spin-off became incredibly hard.

With heavy wheels and blocky bodies, these cars didn’t appear nor handled like the speed demons GRIP wished them to. The poor handling and sudden sharp turns made for some head-scratching moments as I drove around GRIP’s various other modes.

The car physics just weren’t designed for hairpin maneuvers. As modes within Arena battles and Carkour focus upon tighter maps, I could only wonder why players didn’t have more options for directing their cars.

That’s not to say the traditional racing maps fared better. For some reason, most of the game’s maps had noticeably limited draw distance. When driving at high speeds, running suddenly into obstructions occurred much too often for my comfort. Had GRIP: Combat Racing provided some guidance path a la the Forza series, this may have helped the problems inherent to the tracks.

As it stood, however, the traditional maps felt too directionless and random as time after time I crashed full-force into walls on several different occasions.

GRIP: Combat Racing truly feels like a racer out of its time. Given an immersive arcade racing set-up, one could squint and feel right back in the seat of a nineties quarter killer.

But held up to classics like Wipeout and the developer’s beloved Rollcage, GRIP: Combat Racing can’t compare. After just a few hours into the game, I’d seen everything the title had to offer. My remaining hours with GRIP subsequently felt like lost time.

Too many racing games exist today that have moved the genre forward. With GRIP, many aspects seemed lost in the past days of the glorious arcade. There just wasn’t anything that stood out exceptionally well in today’s market.

Held back by baked-in design decisions, muddy graphical effects, and non-exciting sound design, it’s doubtful that GRIP could make any significant comeback due to its flaws. With these elements in mind, take a pass on GRIP: Combat Racing.