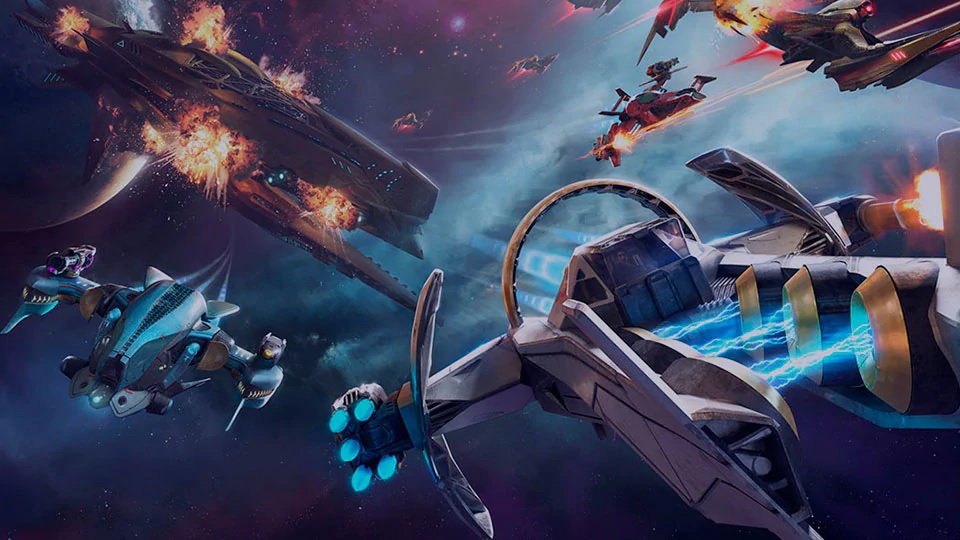 Starlink: Battle for Atlas is a promising game. One that looks to revive the toys-to-life genre and cash in on gamer’s love of spaceship dogfights. But while there is certainly glimpses of brilliance, this Ubisoft action-adventure title falls just short of overcoming the heavy obstacles placed in front of it.

Those obstacles begin with the story. While the game starts off strong, introducing likable and well-voiced characters, it fails to encapsulate any emotion with the story that follows.

Starlink: Battle for Atlas revolves around a battle with an omnipotent alien being, Grax, and his cult of followers, the Forgotten Legion. Grax and his band of cronies want to take over the world, so they kidnap Starlink’s leader, Victor St. Grand. Using his knowledge of a powerful resource, these evil doers look to conquer the Atlas Star System. It’s up to Starlink to rally allies to stop them.

The “evil aliens that want to rule the galaxy” story isn’t something new to sci-fi by any means, but there are definitely ways to make it work. Unfortunately, Starlink: Battle for Atlas doesn’t really shape its narrative in a compelling enough way to do so.

Before we even get to know the characters and their relationships, St. Grand is captured. Every conversation and emotion characters feel from that point on revolves around getting their leader back. The problem is there is no build up. While his capture is supposed to be dramatic and emotional, the impact of it is also lost on the fact that the game just started and hasn’t even had a chance to do any world-building.

It’s not that using St. Grand’s kidnapping as a motivating factor is a terrible plot device, it just that there is no foundation for this revenge plot. Not only that, but almost every cutscene devoted to the story presents itself in a way that implies fans should already know and care about the Starlink team, despite the fact that this is the first game in the series.

The thing is that this plot wouldn’t entirely be an issue if Starlink: Battle for Atlas managed to deviate from the main story every now in then, using side stories to support the narrative and characters.

While games like Mass Effect have also featured these commonplace universe-threatening plotlines, there’s plenty of amazing side stories outside of their main story as well. These stories usually revolve around the side characters, building them up and eventually feeding back into the main plot.

Starlink: Battle for Atlas introduces characters in a similar manner, but doesn’t do anything with them afterward.

After their introductions, new characters are regulated to a few lines of dialogue or a random cutscene appearance here and there and that’s it. They serve little to no importance or tie-ins to the main story. That includes the Star Fox team.

Starlink: Battle for Atlas only manages to deviate from the main mission’s story a few times, but only two come to mind as noticeably good stories. One is a side mission that uses audio diaries to building character backgrounds. The other is a five-mission story where Star Fox must hunt down well-known antagonist Wolf O’Donnell.

The rest of the story is devoted to destroying Grax’s resources, gathering your own, and building allies. This is where the second issue with Starlink: Battle for Atlas rears its ugly head: repetition.

The majority of the time spent in Starlink: Battle for Atlas is passed completing the same destruction and fetch quest-based missions. In turn, you’ll gain resources that you can use for upgrading your ships and gaining a better foothold on each planet. It’s considerably grindy.

Grinding is nothing new in games, but Starlink: Battle for Atlas suffers from the fact that the game focuses on the lesser of the two combat elements in the game. Instead of having the majority of the missions occur in space, they take place on the planets.

Planet-based fights confine movement significantly, as the controls only tend to work well when not in flight mode. This essentially means your ship is more of a hovercraft, all but defeating the purpose of flying a spaceship.

In comparison, space battles are amazing. Dodging outlaws, barrel rolling around Dreadnought gunfire, and just about any other battle that takes place in space is an experience unlike any other.

A lot of the fun in this can be found in the weapon and ship variety Starlink: Battle for Atlas offers. Including 10 different pilots, each with their own unique ability, the game features multiple different ways ships can be set up.

Some ships focus on speed and handling, while others can take more of a beating and do more damage. You can either make up for their shortcomings or double down on their strengths by adding extra wings.

Personally, I enjoyed using Fox’s Arwing, swapping out its guns based on enemy elements or necessary fire rates. This feature is also where the Toys-to-life items come into play, though they don’t have any effect on the game that would differ from simply changing your loadout in the main menu.

When it comes down to it, the majority of the problems with Starlink: Battle for Atlas could be solved if the game followed a different structure.

Instead of forcing story-based planet missions into a game that doesn’t have an interesting story, Starlink should have doubled down on space combat. If it did, the flaws in the story would have been outshined by the constant joy experienced while dogfighting in space.