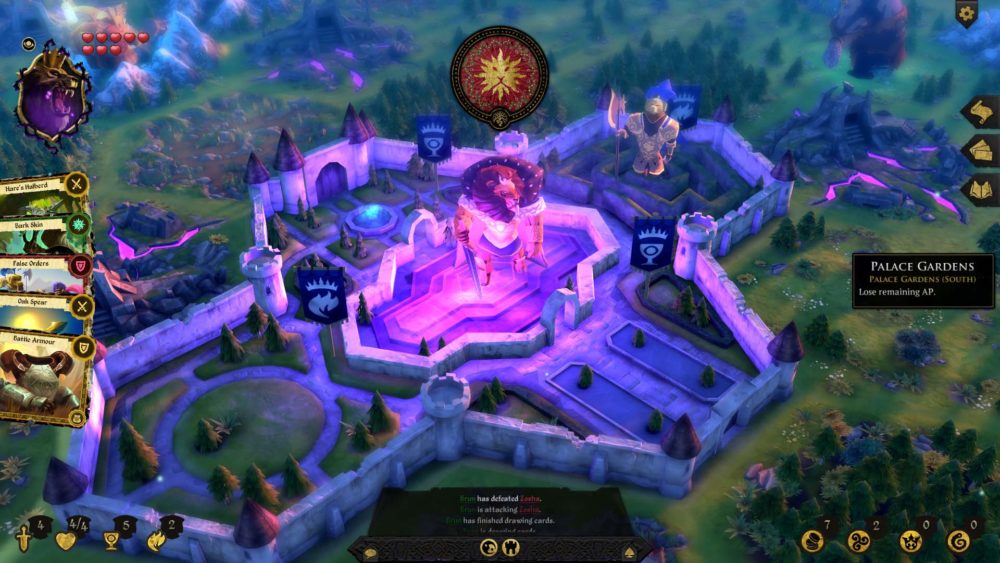 The Australian video game industry is an interesting mix of massive, untapped potential and antiquated governing. Though there is no shortage of talented developers with fantastic ideas (particularly in the hotbeds of Sydney and Melbourne), they are hamstrung by a government that washes its hands of the industry, only supporting projects that are ‘serious’ games made for practical use, such as in healthcare.

The meteoric rise of League of Geeks, then, is a rare example of success, as the plucky indie devs were able to obtain enough funding to help get the ball rolling on their fledgling project. This then led to a successful Kickstarter, and lo and behold, Armello would finally be unleashed on the world on PC and PS4 in September 2015.

Fast-forward a few years, and with a passionate, growing community eager for more ways to play, Armello has made its way to Nintendo’s equally quirky console. For the uninitiated, it’s a digital board game set in a whimsical land of anthropomorphic animals, filled with magic and treachery and slanderous toads. The King has fallen ill with a toxic affliction known as the Rot, and the various clans have sent out representatives in the hopes of claiming the throne. How would you feel being ruled under the iron fist of a fluffy bunny? It’s a harrowing notion, to say the least.

Four players travel around the hexagonal game board, collecting cards and growing in power and reputation as the King slips closer towards death in his castle at the board’s center. Victory can be obtained in one of four ways, either by having the most prestige upon his demise from completing quests and conquering foes, by collecting four Spirit Stones which can be used to purify the King, by slaying the King in battle, or with a rare Rot victory – effectively the same as a Kingslayer win, but with extra conditions on top that we will return to later.

You’re free to pursue whatever style of victory you desire, though certain quests will yield various items and stat boosts that will prove more helpful to a specific method, and changing tact on the fly can be costly if you leave it for too long.

You can set traps to slow your opponents’ progress, or engage them directly. Some animals are better suited for an aggressive approach than others, with wolves typically excelling in combat, whereas rats prefer to hinder their foes from afar. Bears are sturdy and proficient with magic, and rabbits are affluent. Death sends the player back to their starting zone, and costs them prestige in the process. Meanwhile, Rot-ridden vultures known as Banes stalk the board, while the King’s Guards actively seek out threats, and will target players threatening the empire.

It can all seem overwhelming at first, and to be fair, new players will likely find themselves fumbling around while they try to work out the ins and outs. The card system in particular, though intuitive, can be complicated, with three different decks to draw from (equipment, magic and trickery), and the option to ‘burn’ cards in order to help you in combat, or while overcoming obstacles. There is a four-part tutorial to help beginners get acclimated, complete with a charming narrative that is largely absent in actual gameplay. This is unfortunate, because the world of Armello is bursting at the seams with rich, complex lore, and a single-player adventure mode would likely suit it well.

The meat and potatoes of Armello comes from its online multiplayer, and this is where the bulk of players will spend most of their time. Matchmaking is mostly immediate, but you may occasionally end up with a fairly substantial wait in the off-peak hours. Should that happen, you can fill time by playing a single-player game while you’re in the queue, which is a nice touch that saves you from having to stare at the screen, waiting for someone to jump in.

Once the game has started, it’s smooth sailing, with hardly any signs of lag. Each player’s turn has a generous timer, so you never feel rushed, though it can drag a little bit when indecisive players stretch things out until the last possible second. Fortunately, all other players are free to play cards out of turn, allowing you to constantly influence gameplay.

For those who prefer a solo experience, the Switch version of Armello is quite practical, as the portable nature of the console allows for quick sessions where you can bang out a few turns and then put it back to sleep. Other platforms allow suspended play in a similar fashion, but of course, they can’t top the ease that comes from pulling out your Switch and jumping right into it.

Thankfully, though the Switch lacks native achievements, all of the existing ones have been carried over from the other versions of the game. Trying to accomplish all of them is a steep task, with Ancients’ Wrath and Lemur Neeson (har har) standing out as particularly brutal. Though it’s possible to fulfill achievements in multiplayer mode, it’s usually at the cost of victory, and is better left when you’re playing on your own. That is, unless you’re okay with looking like an absolute maniac, frivolously healing Banes and provoking King’s Guards.

Armello lacks a local multiplayer option, and this feels like a missed opportunity on the Switch. The ever-changing deception and strategy would make playing with friends on the big screen implausible, but as a tabletop option, passing the console between players as their turn begins, Armello would absolutely thrive. It would instantly make Nintendo’s version the preferred party option, offering unique gameplay that other platforms simply couldn’t. Admittedly, you would then lose the ability to continue playing cards before and after your turn, but it beats the alternative of omitting the option altogether.

Visually, Armello is a rich and vibrant land, and the designs of the characters and cards are loaded with personality. The game suffers minor slowdown when transitioning between turns in handheld mode, and the character models are less impressive than their counterparts on the more powerful consoles, but this is only noticeable if you’ve played the game extensively on other platforms. Those who are playing Armello for the first time will still be encapsulated by its aesthetic. And goodness gracious, those cinematic trailers are a treat for the eyes.

The musical score is immersive yet subdued, never intruding on the action before you. Other than the King’s mad ramblings, sound effects consist largely of yelps and squeaks from the player animals, which can be strangely satisfying when heard in the process of slaying a particularly pesky foe.

Once you’ve gotten the hang of Armello, decision-making becomes second nature, and the characters are all unique enough that even using animals of the same clan offer completely different playstyles. It’s in this versatility that Armello excels; no two games are ever the same, and part of the fun comes from trying to work out what machinations your opponents have towards success.

Prestige victories are the safest and most common option, and most conservative players will opt for this. A Kingslayer win is far more interesting, costing a player all of their prestige in the process. Should they then fall in battle, they are practically back to square one, and if they successfully kill the King but don’t survive themselves, glory is presented instead to the prestige leader.

Comparatively, Spirit Stone victories can feel like an uphill battle, with stones often popping up in unfortunate places, but they do offer the benefit of being a suitable fallback option, should you happen upon enough of them coincidentally. The aforementioned Rot victory is the ultimate show of dominance, never really presenting itself as a natural tactic. It requires the player to amass more Rot than the King (which will cost them health in the process), then manage to slay him. It’s a feast-or-famine technique, and will most often end up crashing in flames. It’s great when it works, and almost equally as great when your opponents employ it unsuccessfully.

The fact that these different conditions exist make every session that much more interesting, and the hilarity and heartache that ensues from each gambit, with allegiances and betrayals springing up constantly around the board, is what sets Armello apart from other digital board games.

Success feels measured, instead of randomly awarded, and each step you make towards victory is quite satisfying. Even rounds you have completely botched can be turned around with enough maneuvering, and the tension towards the final rounds seems to kick up a notch as players put their dastardly plans into action.

Armello is multilayered and stunning, and it will constantly surprise you. Whether existing players should make the jump to the Switch edition comes down to how much use you can foresee yourself getting from the console’s portability.There is something rather hypnotic about being able to walk freely around the house, poring over your next decision. It’s definitely affordable enough to double dip, and the online community should only pick up in numbers as time goes on.

Overall, Armello has a level of polish and depth that is rare for an indie title, and especially for a studio’s debut. It’s truly another feather in the cap for the Australian gaming industry. We can only hope that sooner, rather than later, the powers that be will finally take note of this.