Superhero video games don’t always have the best reputation. Whether they were made as a movie tie-in or for name brand recognition, a lot of the video games that represent these titles simply don’t hold up. More often than not, DC Comics games are an exception to that rule.

While they may struggle in the movie department, DC Comics games have given players some of the best superhero gaming experiences of all-time. Whether they’re fighters, point-and-click adventures, or open world action, it’s hard not to enjoy these superhero games. Here’s our pick of the top 10 DC Comics games of all time. 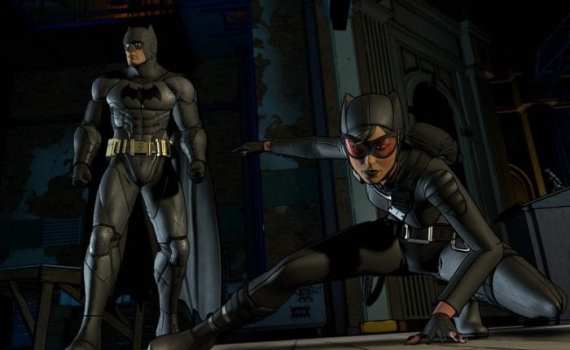 Love or hate them, Telltale series are perfect for telling a superhero story. Their style and storytelling feel like a comic book jumped right off the page and gave you prompts. In this unique spin on the DC Universe, Batman: The Telltale Series places players in the shoes of both Bruce Wayne and Batman, as each must make important decisions that will shape the future events of the games.

While Batman: The Telltale Series features many of the same villains and storylines comic book fans know from Batman TV shows, movies, and comics, it still manages put a fresh spin on things. The game has plenty of unexpected twists, including plenty of different character backstories and roles.

Like most Telltale games, the majority of the gameplay elements occur via quick-time events but also has a fun mechanic with the detective mode. Depending on the scene, players will have to help Bruce or Batman connect clues together to recreate crimes and plan his next move. The fun really comes down to what decisions you make, and what villains you create as a consequence. 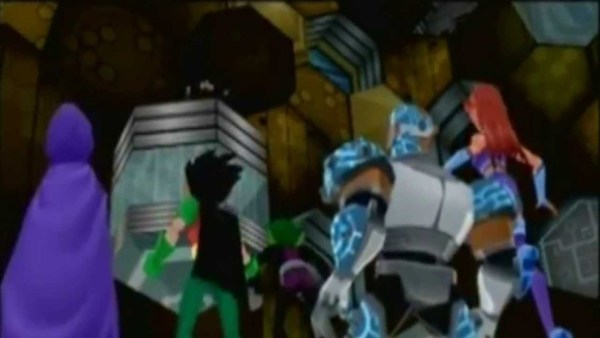 Some of the best characters in DC Comics usually start off as sidekicks. So it makes sense that one of the best games in the franchise revolves around a group of teenagers led by the most infamous sidekick of all time, Robin.

In this 2006 action beat ’em up, the Teen Titans are sucked into a video game. In order to escape the game and return to their reality, they must fight through levels of enemies and face villains like Slade and the Master of Games. The story is as fun as the premise and even has an interestingly meta ending.

Alongside the main storyline, Teen Titans also has a game mode known as Master of Games. In this mode, players select from 31 different unlockable characters to engage in a versus battle. Thanks to this feature, the game really feels like two different titles packed into one, as both a beat ’em up and a fighting game. 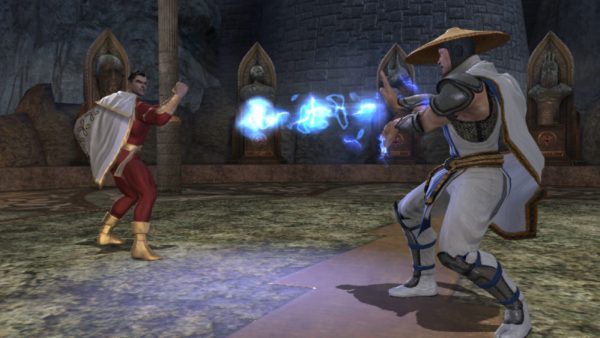 One of the last crossovers superhero fans could have imagined back in 2008 was the one between DC and Mortal Kombat. These two worlds collided in Mortal Kombat vs. DC Universe after Raiden and Superman accidentally merged them while fighting off invasions. On top of that, each series main villain, Shao Kahn and Darkseid, combined as well, resulting in Dark Kahn. Their only hope of returning each world to normal is to fight their way to Dark Kahn.

Mortal Kombat vs. DC Universe’s story mode allows you to play through both perspectives, with one plotline following the DC side, while the other follows Mortal Kombat characters. With 22 characters in total, 11 from each, the story mode even lets you swap them out throughout, resulting in a lot of dream match-ups. 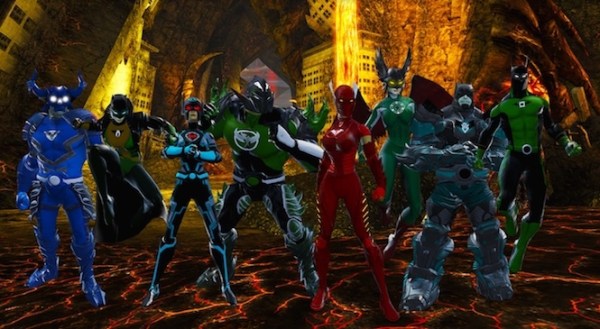 DC Universe Online is easily the best MMO superhero game that has ever been made. DC’s answer to WoW, this 2011 title allows players to create their very own superhero or villain, one that would either stop crime or start it. Like any MMO, the game features plenty of quests, raids, and a big open world. Unlike other games, DC Universe Online lets players fight their favorite DC characters, from heroes like Superman to villains like the Joker.

Customization in DC Universe Online is also top-notch, both aesthetically and when picking powers. Choose a body type, personality, costume, and skins to create a unique look. After that, decide your movement mode, weapons, and powers to decide just how you will play the game. All of these different options make it impossible to just make one character, meaning you’ll be playing this one a while, enjoying every second of it. 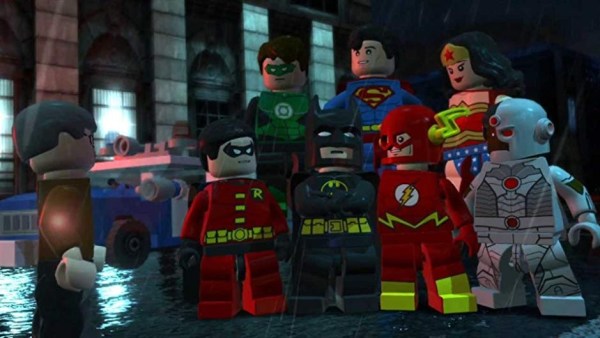 The DC Universe is home to a lot of interesting characters, heroes and villains alike, but rarely do games let you play as most of them. Lego Batman 2: DC Super Heroes has 75 of them to unlock and run through its open world with. In order to do so, you collect gold bricks and studs throughout the game. While it may sound tedious, it’s really fun thanks to an original story and great voice acting.

The plot of Lego Batman 2: DC Super Heroes sees Batman, Superman, and the rest of the Justice League team up to stop a web of intricate plots by the Joker and Lex Luthor. Even though it’s a Lego game, the character interactions, comic integration, and a handful of other aspects unique result in a better story than anything the DC movie franchise has put out so far.

The Wolf Among Us 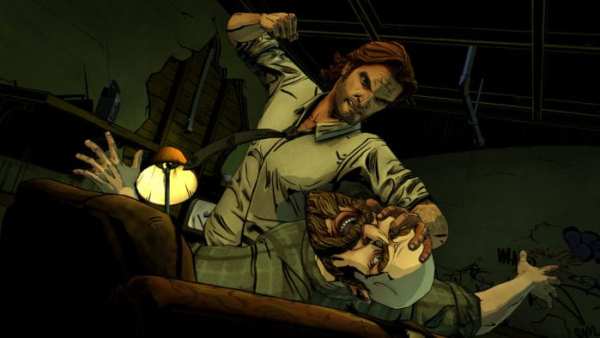 Not many people are aware that The Wolf Among Us actually exists in the DC Universe, or rather that DC owns the Fable comics from which it is adapted. Yet that still didn’t limit the number of people that loved Telltale’s The Wolf Among Us when it released for consoles in 2013, and for good reason.

The Wolf Among Us follows Bigby Wolf, better known from fairytales as the big bad wolf. In this world, these fairytale creations exist alongside humans, hiding among them with a magic known as glamour, which masks their appearance. When a string of murders is committed in Fabletown for the first time in ages, it’s up to Bigby to figure out what is going on.

As you can tell by the plot, this game tells a much grittier tale than most DC games, something that it gives it a leg up on the competition. Since it isn’t limited with storytelling and characters, the majority of the characters in The Wolf Among Us are hilarious assholes. You’ll find yourself surprised at just how deep the stories end up getting by the end. 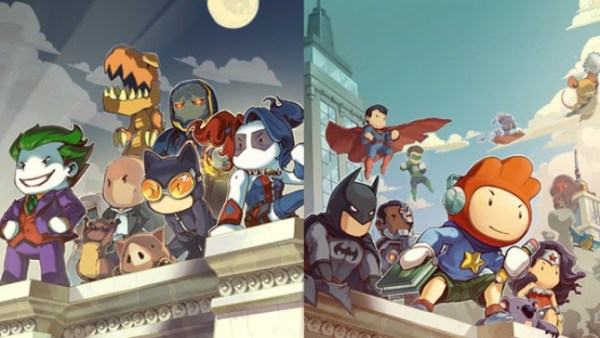 Just like superhero movies, the Scribblenauts series is fun for all ages. Scribblenauts: Unmasked follows Maxwell and his magical notepad to the world of DC, where he works alongside heroes like Batman, Superman, Wonder Woman, and the Green Lanterns in order to stop super-villainous plots.

Like past Scribblenauts games, the beauty of Unmasked is just how many different objects or persons relevant to DC that Maxwell can create. Numerous interpretations of Batman can be created using the right words, taking full advantage of the variety of different storylines that exist within the multiverses of the company’s superhero franchise. Maxwell is even able to bring about some of the most obscure characters in DC lore, including characters like Bloodwynd and Matter-Eater Lad. It’s truly a challenge to find all of the different configurations Scribblenauts: Unmasked places at your fingertips. 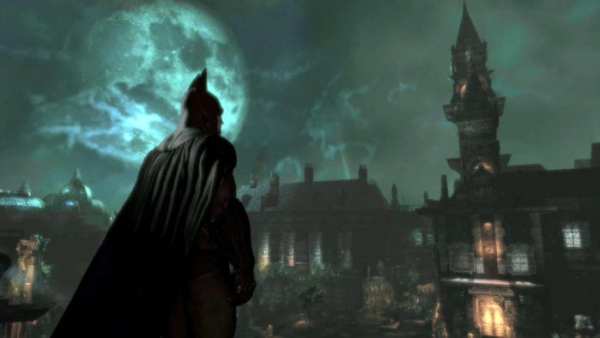 When Batman: Arkham Asylum was revealed, it was written off as just another attempt to adapt the Dark Knight into a video game. Once it released, it changed the way that gamers looked at superhero video game adaptations forever.

Rocksteady Studios’ 2009 adventure game took place in one of the most legendary settings in all of Batman lore: Arkham Asylum. As Batman escorts the Joker to his cell, all hell breaks loose, and Batman is the only one who can stop the madness. In order to do so, he must fight the well-known Rogue’s gallery with everything in his arsenal, resulting in a gripping story that follows Batman throughout the eerie prison.

Alongside a fantastic story, Batman: Arkham Asylum introduced a fast-paced combo-oriented brawling system that really made you feel like an unstoppable force of nature. Even gameplay outside of the core action was enthralling, whether it was doing side quests or using your detective mode to solve Riddler trophies. 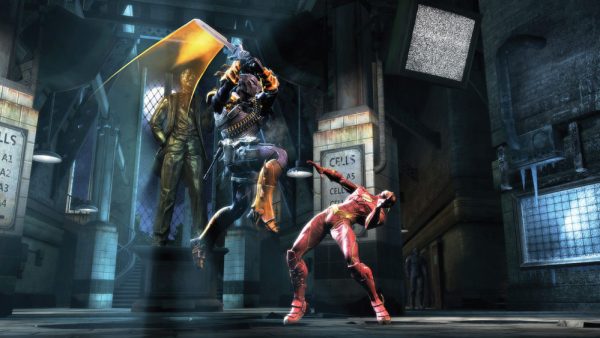 It felt like it would be hard to top NetherRealm Studios’ 2013, as it has one of the most compelling combat systems and best story integration of any DC Comics game ever made. Four years later, the sequel managed to do the same thing, even making slight improvements.

Injustice 2 continues the crazy multiverse story from the first title, as Batman and his insurgency attempt to restore society after the fall of Superman’s regime. That all comes crumbling down when Brainiac forms an adversarial group of his own, forcing Batman to consider freeing the imprisoned Superman to help combat the threats. Alongside its presentation, this story succeeds in telling a compelling narrative because of the build-up of the first installment.

Minor tweaks to the sequel’s gameplay helped Injustice 2 overcome a lot of the issues of the first title faced after a while. Additions like evasive and recover mechanics really helped things feel a lot tighter in this fighter, making it far less frustrating to play against friends and online.

It’s also important to mention that the DLC for Injustice 2 is top-notch as well. Alongside 30 playable characters, there are plenty of reskinned DLC characters, as well as the Teenage Mutant Ninja Turtles. Cowabunga! 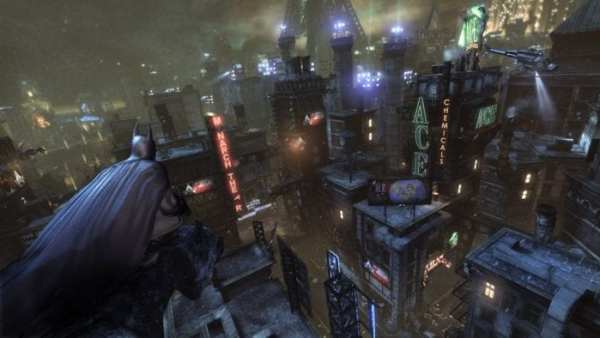 Batman: Arkham City takes everything you love about Batman: Arkham Asylum and perfects it. In this sequel, players are dropped into a quarantined section of Gotham, one that is overrun by the criminally insane. To get things back to normal, Batman must unravel a nefarious plot by the mad doctor, Hugo Strange, all the while stopping other crazy villains, like the Mad Hatter and his tea party.

Once again, the setting in this Rocksteady Studios title sets the rest of the game up for success. As the title suggests, Batman: Arkham City places a huge open world at your fingertips, from the Gotham PD to Ace Chemicals. This vast playing field is made all the better with the same flight and grappling mechanics that were introduced in Arkham Asylum. The main difference is that this installment features a lot more landscape to glide around.

One of the game’s biggest accomplishments is that gameplay somehow improved, refining the already fun combat system, as well as adding in more stealth and exploration elements due to the larger world. If you are looking for a game to set the standard for what a superhero game should look and play like, Batman: Arkham City is going to be your best bet.

That does it for the best DC Comics games around! Let us know your favorites down below.