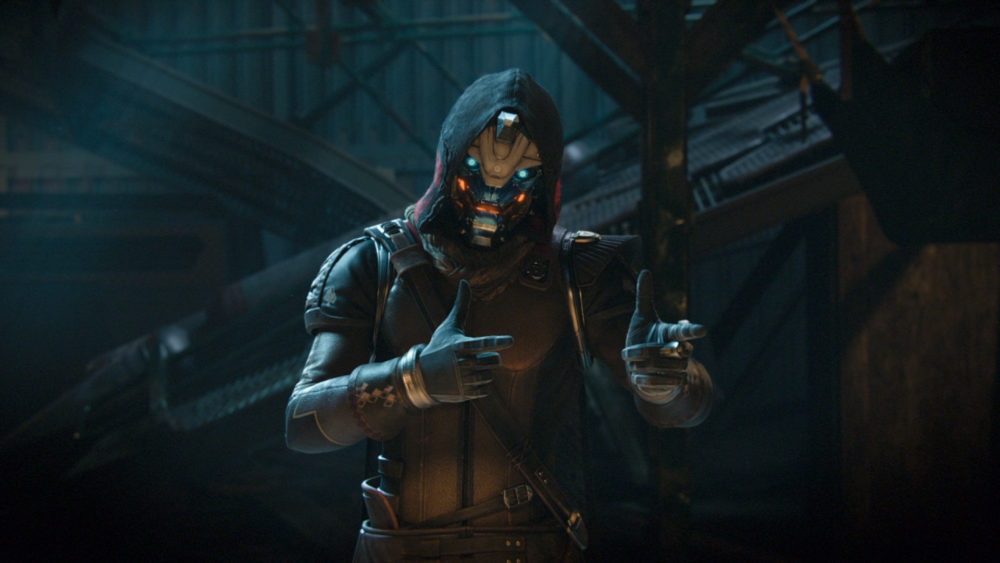 It would be a vast understatement to say that, as a franchise, Destiny has struggled to convey its narrative. Despite having a majestic setting, filled with interesting creatures and races, issues at Bungie resulted in the original story getting completely axed only a year before it was released. As reported by Kotaku, the company felt that the story was too campy and linear. Their solution was to convey the majority of the plot via items called grimoire cards, instead of through cutscenes. These cards were unlocked alongside specific story events, explaining characters, settings, and other lore-driven backstories. The main problem? Players couldn’t even access these cards in the game though, as they could only be read on Bungie’s website. Most of the writing team that faced these internal issues, lead by veteran Joe Staten, eventually left the company after the choice to use these cards, and the story has suffered as a result.

While it was a vast improvement from the original, Destiny 2’s story eventually faced many of the same problems. Conflict was introduced immediately, alongside a more interesting plot and villain, but a lot of the story beats felt rushed. Guardians regained their Light within only an hour after losing it and the Vanguard was reformed almost as quickly. A deus ex machina ending with the traveler really soiled things at the tail end of things as well. Even though it was two times longer than the original, nothing of value really happened throughout the main plot of the sequel. In the end, the same issues that Bungie cited in Staten’s original Destiny supercut ended up occurring in Destiny 2.

Despite this, gameplay for Destiny 2 still featured amazing gunplay and co-op experiences. So it sold well and continued plans to create more content thanks to the success. Just like with the first game, early expansions focused on adding other PvP and PvE features, sprinkling lore in on the back end. By the time Warmind was released, there had still yet to be a DLC that put a heavy focus on a compelling story. Bungie got the hint with Forsaken though, as the expansion did the boldest thing the series has ever done: kill off the one character with charisma.

When I first saw that Destiny 2: Forsaken would be killing off Cayde-6, I was a bit annoyed. Like I said above, the Exo Guardian was one of the only characters, throughout both Destiny and Destiny 2, who had personality. While Zavala and Ikora played rigid militaristic archetypes, Cayde-6 was the laidback wiseguy who always spoke his mind. In The Taken King, he was the one who took action instead of arguing about what to do. There were even a few instances where he was somber and serious, showing a depth that other characters sorely lacked. Cayde was also the one character in the game that I wanted to interact with more. So learning that he was going to die felt like I was going to be stuck at a family dinner party without my funny uncle.

While this still slightly feels like the case, Cayde’s death did do a lot of things that the series has desperately been missing. First off, it gave a reason for the story to even be happening. The majority of the missions throughout Destiny 2 all revolve around Guardians simply gathering resources or stopping a world-ending threat. While Uldren is certainly a similarly imposing threat, the catalyst of this story is that of revenge. This results in something else that Destiny stories have lacked: emotional weight. Since we have had such a positive history with him, we cared about Cayde (Sorry Speaker). We as players want to avenge him. More than anything, we can’t wait to kill Uldren for what he has done.

Even without knowing what exactly his motives are at the start of Forsaken, Uldren was already far more interesting than the previous villains throughout the series. Instead of talking up a big game, only to be thwarted in the end, he kills Cayde before the rest of the Guardians even know about it. A compelling villain is vital to a game that centers around good versus evil, so it’s important that the Awoken baddy was able to make an impact right away. A good antagonist should also be feared alongside being hated. Knowing that Uldren was able to kill a Guardian as powerful as Cayde-6 means he isn’t a pushover and that killing him comes with the satisfaction of earning it.

More than anything, Cayde-6’s death added stakes to Destiny 2. The start of the sequel did its best to strike fear into the hearts of players with the idea that Guardians are now dying because their Light was taken away. This meant that death wasn’t simply something that could be brushed off. You die, you die. Granted, like any video game, the player will always be able to respawn, but the in-game world should have rules that result in consequences if Guardians mess up. It wasn’t even an hour into the story before your Guardian resolves the situation though, finding Light and making the opening seem a bit pointless. Sure, Darkness Zones have always been a thing, but they have never really felt like areas where tons of Guardians have died, despite the implication. Cayde-6’s death meant that even the most powerful Guardians could die.

Last, but not least, there’s the impact of the story. Unlike most instances, Cayde’s death wasn’t simply something that happened, only to be forgotten about immediately afterwards. Instead, there are a number of ways he is honored once the story is completed: a goodbye letter, the secret stash recording, and a small memorial placed next to his favorite ramen shop. While it is sad to know he is gone, it’s good to know that his death wasn’t simply a meaningless plot device and that there was care put into the decision.

I can’t be sure what the future holds, but I am hopeful that the events of Forsaken will not only be referenced but that they will have a ripple effect for how certain characters and stories play out in the future of the series. The Destiny franchise still has a long road ahead of itself if it hopes to redeem its rocky start and turn into Bungie’s true successor to Halo, but Forsaken is a good start.