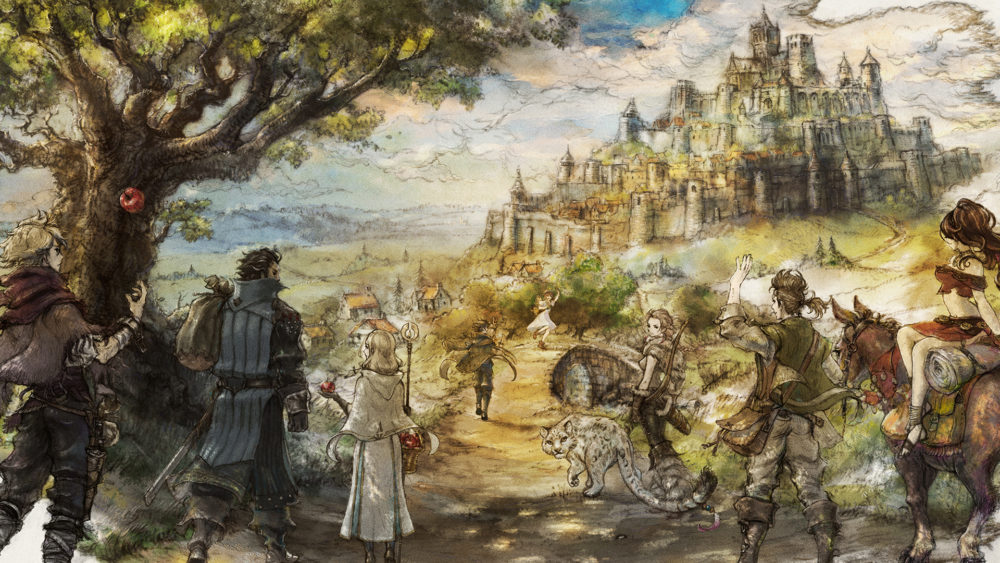 [Endless Playlist is a series of monthly articles where we pick a video game soundtrack for discussion, try to provide a critical analysis of how it performs within the game it’s from, and decide how it holds up on its own. This month, we’re breaking down Octopath Traveler’s soundtrack.]

Possibly one of the most divisive aspects about Octopath Traveler is its split focus on its eight protagonists and the in-game world, Orsterra. Without getting into heavy spoiler territory, after having had some time to ruminate on the game’s strengths and flaws, I think it’s pretty safe to say that the developers were highly focused on fleshing out Orsterra, along with its history and lore. As I got into listening to the game’s (mostly) excellent soundtrack, that world focus became increasingly clear to me as well.

I don’t typically enjoy ending themes in RPGs and games in general, and it feels a little unorthodox to start an article like this by talking about the ending theme, but that’s what we’re gonna do today. So, the ending theme of Octopath Traveler, aptly named Ending Theme, is the best example of how the game is more about Orsterra than its characters. Taking a look at the track list, there are individual themes for every character, as well as each of the starting towns and regions you can explore. It’s interesting, then, to see that the Ending Theme is a medley of the eight region themes rather than the character themes, and what a glorious track this is.

Starting off with the Frostlands piece, the musical arrangement goes clockwise if you’re looking at a map of Orsterra. We get short snippets of Frostlands, Flatlands, Coastlands, Highlands, Sunlands, Riverlands, Cliftlands, then Woodlands in that order. Some of the region themes are excellent, while the others are a little forgettable. But in this beautiful orchestral medley, they all sound impressive. Take the Cliftlands for instance, the original track itself isn’t that impressive. The production value is certainly on point, packed with live flutes and strings to create a very classic JRPG sound. The tune itself is meant to be highly ambient, however, and this, along with Woodlands, are not as full of flair as the other tracks.

But in Octopath Traveler’s Ending Theme, Cliftlands’ orchestral rendition is lovely. I suspect it’s because the clip is so short, and the way the track itself ebbs and flows between the different themes, that makes it easier to appreciate it as a whole. Then there are regional themes like the heartbreaking and beautiful Sunlands that simply shine in an orchestral cover. The way it transitions into the Riverlands theme is sublime as well, as we’re essentially going from a more melancholic melody into an almost similarly sad tune that invokes the same kind of nostalgia we’d get from old-school JRPGs, and even some classic Studio Ghibli movies with that background percussion track.

After we’ve made our rounds of the eight regions in Orsterra, the Ending Theme ends off with a final burst of energy by covering the game’s Main Theme, which might very well be one of the best JRPG main themes we’ve heard this generation. The Main Theme is already great on its own, and it has this incredible build-up that brings out this soaring and sweeping feeling —absolutely perfect for a game that’s about going on an epic adventure that spans the entire world. We don’t get much of it in this version, but the Main Theme does such a great job with its repeating chorus and multiple uplifting build-ups that it’s hard not to feel so incredibly inspired when you listen to it. It’s a fantastic loop that encapsulates the carefree and whimsical nature of the game.

So, in short, Octopath Traveler’s Ending Theme and Main Theme are astounding and gorgeous. In fact, they’re probably the best tracks on the entire soundtrack. It’s interesting, then, to think about why composer Yasunori Nishiki chose not to close out the Ending Theme with the individual character tracks instead. One reason is that this is a game about Orsterra, as previously stated, but perhaps a more simple explanation is that the character tracks just aren’t as good.

That’s not to say that they’re bad, but it’s pretty obvious that they’re just not as outstanding or prominent as the region themes. And that’s a fact that’s made rather clear in the game itself. Primrose’s first chapter, for instance, makes use of the Sunlands theme during her reminiscence sequence instead of her own character theme, and that’s because players are able to connect the characters to their corresponding regional themes rather than the character themes themselves. Immediately after defeating Primrose’s chapter 1 boss, we hear her character theme for the first time, but we’re hit with the full force of Sunlands when we exit the area, and that feels way more impactful than the previous track did.

In comparison to Sunlands, Primrose’s theme just doesn’t carry as much weight. Both themes make use of the same instruments, but Sunlands’ melody is noticeably slower and heavier, and that somber beat is just a much better fit for Primrose as a character, given the nature of her bloody backstory.

In my review of the game, I briefly mentioned that Primrose had easily the best story in Octopath Traveler, and that’s thanks in no small part to the way the music was implemented during her chapters. From the start of the game, we’re introduced to Primrose as a dancer in Sunshade, also known as the city of pleasures. Immediately, we get the sense that there’s something not quite right with how the dancers are treated by their master, and it becomes pretty apparent that the dancers aren’t just dancing for their master and male clientele, but the game never makes that explicit. Instead, everything is hinted at or suggested, largely through the music. The city theme for Sunshade is this slow, sultry tune that goes well with the shady environments of the town, and it works well for Primrose’s narrative.

Her story constantly takes her to towns with fitting music as well, as Town Veiled in White serves as the overly lonely and melancholic theme for the frosty town of Stillsnow. Here, we’re treated to a rather simple piano track with a light tambourine backing, as well as crying strings that kick in at around the 45-second mark. H’aanit and Therion’s stories bring them to snowy towns with this theme as well, but none of their plots fit Town Veiled in White quite as appropriately as Primrose’s. While her story kinda goes off the rails towards the end, the soundtrack carries the narrative hard, and helps to deliver so much emotional impact. It’s all about the regional and town themes with her story, and Primrose’s theme is left largely forgotten.

Of course, there are really well-done character themes. Ophilia’s theme is a sweet-sounding strings and flute piece that reflects her character well, while Olberic’s is a heavy, epic-sounding piece that relies on deep strings to create this heroic and majestic vibe that fits every aspect of his character. These are the two standouts, but most of the other character themes like Therion and Tressa’s are largely forgettable and kind of a bore to listen to.

Interestingly, Octopath Traveler has a few audio tricks to pull as well when it comes to character motifs. Towards the end of the soundtrack, we get eight different motifs for each character, which are mostly just snippets of their themes, and these are used right when the game ends and before the Ending Theme plays. Which motif plays is dependent on which character you picked as your protagonist for the game, and it’s a nice personal touch to make your journey feel a little more unique.

The game makes use of a similar technique with lead-ins for the boss battle themes as well, where we’d hear a unique, 30-second clip for each character that transitions beautifully into the start of tracks like Decisive Battle and Battle at Journey’s End. For the most part, Octopath Traveler nails its battle themes, with Battle at Journey’s End and Daughter of the Dark God being the real highlights here.

For the most part, though, the real focus of Octopath Traveler’s soundtrack is on the regional tracks, along with the main and ending themes. Much like the game itself, Octopath Traveler is far more concerned with telling a story about Orsterra than the characters. Because of that, the soundtrack ends up being a bit of a mixed bag. Still, the one redeeming quality of this soundtrack is that when it shines, it really shines, as the Main Theme and Ending Theme have shown us. For his first major project, Nishiki definitely knocked it out of the park with this one, and I can’t wait to see what he does next.