Death’s Gambit and Salt and Sanctuary

There are tons of Souls-like games out in the wild right now, but at the moment, there are two games in particular that stand at the forefront of discussion when people ask about games they should play if they like Dark Souls. There’s Salt and Sanctuary, which released two years ago and just got a Switch port this month, and Death’s Gambit, which just launched this week.

The reason why we’ve decided to take a look at these two games specifically is because they’re similar in ways that aren’t applicable to other Souls-like titles like Nioh. Both games play out on a 2D plane (though with different art styles), and both were developed by independent developers who are clear fans of From Software’s games, but are determined to provide a fresh spin on the Souls formula we all know and love.

For today, we’ll be examining and analyzing both games in four different categories: combat, level design, character customization, and lore. We’ll pick a winner for each category before crowning an overall victor when all’s said and done. So, let’s get to it.

Round 1: Which Has a Better Combat System and Bosses?

The most important factor for any Souls-like game is its combat system. In that respect, both Death’s Gambit and Salt and Sanctuary have done a phenomenal job here. The moment-to-moment gameplay is very similar in both games; because things take place on a 2D plane, you’ll be slashing left and right, dodging left and right, and blocking left and right. Both games also feature a jump button to allow you to leap pass enemy attacks. There are also different classes and weapon types to experiment with, and this can change up your play style quite a bit. But for the most part, the combat feels similar. That said, we did find that the combat in Salt and Sanctuary was a bit more enjoyable and responsive than in Death’s Gambit, where the game would suffer from a lack of feedback whenever you landed a hit or took damage.

As for the boss fights themselves, while Death’s Gambit has some seriously impressive looking bosses, we feel the need to mention that most of them aren’t that fun to actually fight. There are a few standouts, such as the Phoenix, Bulwark of Aldwynn, and Amulvaro, but most of the other bosses can fall a little bit on the easier side, unless you fight their heroic versions. Salt and Sanctuary, on the other hand, has a lot more variety in terms of bosses, and they’ve all got interesting move sets to study.

Winner: Salt and Sanctuary. We feel that Ska Studios’ game has slightly better 2D combat, and while its bosses might not look as good as the ones in Death’s Gambit, we had a more enjoyable time fighting against them.

Round 2: Which Has Better Level Design?

One oft-overlooked aspect of what makes a game a Souls-like is the level design. Part of the charm of From Software’s games is being able to explore a sprawling world, and then finding shortcuts or hidden pathways that loop back into an area you’ve already visited. When the game is able to experiment with verticality to create some seriously interesting geography in the world, finding those shortcuts become a real pleasure.

Both games definitely play around with interconnected level designs, but we have to give the edge to Death’s Gambit because of how compact its world is compared to Salt and Sanctuary. Yes, Death’s Gambit has a smaller map, but it also constantly provides players with a path back to the central hub, and in ways that don’t feel forced. You’ll lose your bearings occasionally, but if you head back in the general direction of Sanctuary even without knowing exactly where you’re going, the game never fails to reward you with either a new checkpoint or a locked door that leads back to safety.

Salt and Sanctuary has a much bigger world, and in some ways, that’s actually a detriment to the game. It’s difficult to get a sense of familiarity with the game’s world because of how big it is, so it feels like you’re always searching for the next checkpoint instead of seeing how all the levels are connected with each other. This is purely a case of personal preference; some players might prefer a more compact design, while others would want the world to be as big as possible.

Winner: Death’s Gambit. The verticality of the world map is one of the strongest aspects of the original Dark Souls, and this game executes it well.

Round 3: Which Has Better Character Customization? 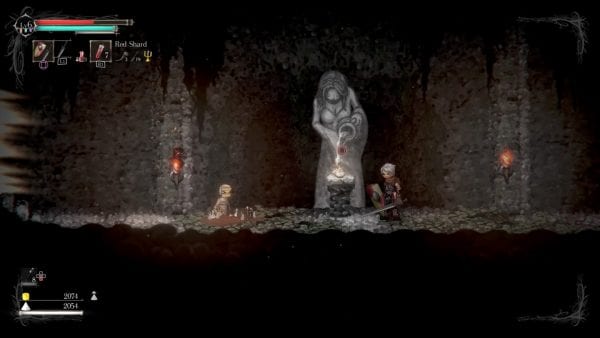 Souls games usually give players a good amount of customization options to play with, not just in terms of character appearance, but also character build as well. If we’re talking purely aesthetics, Salt and Sanctuary wins because it features a pretty nice character creator that lets you craft a new avatar. Death’s Gambit has you playing as Sorun, whose appearance can’t be changed. He’ll have the same armor set throughout the game, and his cape and weapon are the only things that will provide any distinct qualities to his appearance.

When it comes to character builds and play styles, both games offer quite a bit of versatility as well. Death’s Gambit starts off with seven classes you can choose from, and they all play quite differently from each other. You can also unlock weapon abilities for each type, which adds a lot more depth to the combat as a whole. However, there aren’t actually a lot of separate weapons for each weapon type. In fact, it’s very likely that you’ll be able to complete the game with the weapon you started out with because there isn’t that much variety in that regard.

This is where Salt and Sanctuary shines, as it completely embraces the Dark Souls style of throwing in all sorts of different weapons with different stats for you to min-max your build. Salt and Sanctuary probably has 10 times as many weapons in Death’s Gambit, and that’s not an exaggeration. This game also features an insane Path of Exile-esque skill tree that offers tons of options for really making your build your own. For the fashion Souls fans, there are also tons of armor sets you can obtain to give your character a distinct look.

Round 4: Which Has Better Story and Lore?

Death’s Gambit features a main protagonist named Sorun, who’s come to the mysterious land of Aldwynn to look for his mom and pursue an ancient myth of immortality. Most of the story is conveyed through NPC dialogue, but a lot of the lore and more nuanced storytelling can only be found through cryptic item descriptions. This game also takes a lot of liberties with the death mechanic, where you can only see certain story sequences if you die a certain number of times or during certain boss encounters. Later on in the game, there is a much heavier focus on the narrative, and some of the gameplay elements fall apart a little to make way for that.

Salt and Sanctuary sticks a little more closely to the Dark Souls style of storytelling, where you can get as much or as little story as you want. The game puts you in the shoes of a shipwrecked sailor who washes up on a mysterious island, where they’re tasked with finding the princess stranded there. The story isn’t spoonfed to the player at all, and it has to be actively discovered by the player.

Winner: Death’s Gambit. Again, this is up to personal preference. Both games feature great stories, but we have to give the edge to Death’s Gambit because of how it presents its narrative. Having a protagonist that speaks can often make a story feel forced or rail-roaded in a game like this, but White Rabbit pulls it off well, and we found ourselves constantly engaged by it.

So, at the end of the day, trying to determine which game is better is a little tough. For the fan who just wants more of the classic Souls experience, Salt and Sanctuary delivers in droves. The story is purely in the background, and the focus is on the tight gameplay and the player’s ability to make a truly unique build that represents them.

If you’re looking for something a little different, but still want challenging combat and bosses, Death’s Gambit provides a nice middle ground option. There are many story elements that almost feel reminiscent of games like Undertale and NieR, and that truly sets it apart from all the other Souls-like games out there.

But which do you think is a better Souls-like game overall? Let us know in the comments down below.