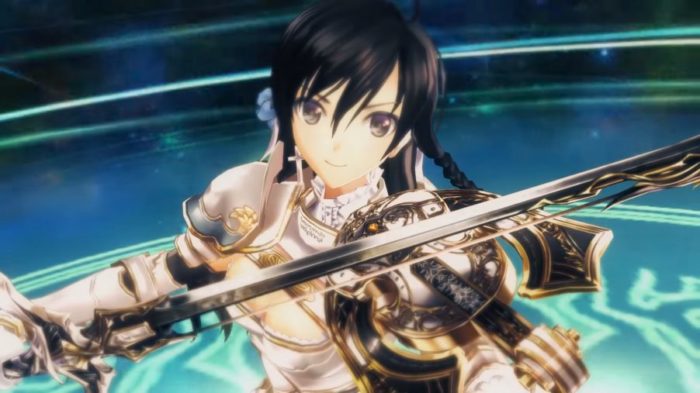 It’s been a long time since the Shining series has made its way out of Japan, with the last title being Shining Force EXA on the PS2 in 2007.  Since then, the series has changed dramatically, taking cues from other franchises like the Tales series and turning into a party-based action-RPG. Shining Resonance Refrain feels like a standard entry in the JRPG genre, not really failing at anything, but also not excelling at anything at either.

Shining Resonance Refrain stars a young boy named Yuma, captured and experimented on by an empire due to the fact that he houses the soul of the legendary Shining Dragon within him. The game wastes no time hopping right into the story as Sonia, the princess of Astoria, comes to rescue Yuma. Essentially Yuma throws his lot in with Astoria, and begins working with the Dragoneers, powerful warriors who wield weapons known as Armonics forged from the body of the Shining Dragon himself, which also function as musical instruments.

Shining Resonance Refrain is split up into eight different chapters, and you’ll basically be dividing your time between running around the city of Marga and exploring the world, battling enemies, and finding treasure. Marga functions as your base of operations and there you can take on quests, buy items, talk to your party members, and more. Sadly Marga is the only city you’ll visit and it’s relatively small, lacking much to see and do. While the city itself doesn’t have a lot to explore, there are a plethora of optional scenes you can view with your party members, adding some much-needed flavor to their personalities and the overall story.

The main narrative in Shining Resonance Refrain fits a pretty typical JRPG mold with an evil Empire, plenty of scheming and backstabbing, the power of friendship, and other tropes. Dragons play a huge role in the story, fleshing out some of the lore while also affecting the main party.  The story isn’t bad per say, but it’s filled with genre tropes and unsurprising twists, and there just aren’t any moments that stick out as incredibly memorable. Luckily, it’s saved a bit by the main cast of characters, who in the end come out as a charming group of friends. Again, these characters initially are archetypes that you’ve already seen, the quiet and socially awkward main hero, the fiery headstrong red-haired character, the dutiful priestess, etc. The optional scenes you can view in Marga do a lot to flesh out character’s personalities, and they’re consistently funny or charming. At the same time, Shining Resonance Refrain contains a kind of relationship system where you can choose which party member you want to talk to at night, and even take them on a date around the town.

This helps flesh out the main party even more, but don’t expect some kind of complex romance system a la BioWare. The dating system is very simple, and there’s nothing stopping you from taking multiple party members on as many dates as you want. Sidequests do little to flesh out the game, and the wealth of ones you can pick up in Marga are just general fetch quests or kill quests, with rewards that often don’t feel worth it. For most of the game I found myself just picking them up and seeing what I finished along the way, not going out of my way to complete anything.

Shining Resonance Refrain doesn’t feature a typical equipment system, instead there are various equippable items that let you customize characters. Each character’s weapon has a number of slots that you can fill with gems known as Aspects that have a variety of effects, such as boosting a character’s HP, increasing their dash range, and reducing the amount of damage you take from blocking. You can also change the “Tuning” on your weapons, changing the overall effect of certain aspects, such as increasing Yuma’s attack speed, or adding wind damage onto another party members’ basic attacks. Outside of leveling up, these are the main two ways you’ll strengthen your characters across the experience.

Combat is where Shining Resonance Refrain takes the biggest cues from other games, and it feels easily comparable to that of the Tales series. You bring up to four characters into battle, directly controlling one, while being able to issue commands to the others. You have basic attacks, a strong attack mapped to triangle, and four different skills to use on L1 known as “Forces.” Each party member functions quite differently, and you can keep things varied by switching between them whenever you want.

Combat flows smoothly, and Shining Resonance Refrain does introduce a couple unique mechanics to set itself apart. Yuma can use the power of the Shining Dragon during battle, transforming himself into the powerful creature and opening up some devastating attacks. However, in dragon mode Yuma’s MP constantly decreases and the lower his MP the higher the chance he’ll go berserk, which means losing control of him and potentially hurting other party members. The other unique mechanic is the B.A.N.D. system, which lets you use different songs during battle to increase your stats or implement other effects. A BPM (Battle Performance Mana) gauge is always on the left-hand side of the screen, and this dictates when you can use the system. Each time you use B.A.N.D. a colorful animation shows the party playing together, and whoever you choose to be at the center of the performance can decide what the song’s effect is.

Like in other JRPGs, your party can form “bonds” by battling together and the idea of Resonance grants them bonuses when fighting together. You can unlock a lot of different “Traits” to equip on each character, which will alter how they interact with the others in battle, and what kind of boosts or bonuses you might see. The entire system takes a bit to wrap your head around, however, and you can easily get through most of the game without seeing how Traits really affect anything.

These systems help give Shining Resonance Refrain a bit of a unique feel, but it just doesn’t match up to some of the better action-RPG combat systems out there, like Star Ocean: The Last Hope or Tales of Xillia. This is due, in part, to your allied AI which can range from helpful to downright stupid at times. Certain characters have abilities that revive other party members, but not once would they use them unless I was controlling them directly, of course. Party members also make little effort to avoid obstacles during boss battles, and I found myself frustrated more than once at my party members dying. This is compounded by the fact that Shining Resonance Refrain has some pretty brutal difficulty spikes.

Boss battles, in particular, can be very rough, and there are times the game has you fighting multiple bosses in a row without a chance to save or restock items. After big story moments, the game will bump up enemies by a good eight or so levels, requiring you to grind out a few levels of your own if you want to keep going and not get destroyed. There’s a character in Marga that lets you access different dungeons with enemies and treasures, relieving the grind a little bit. Still, the amount of grinding required in the game definitely makes it feel dated, more befitting of an older style of JRPG than a modern one.

Another modern feature Shining Resonance Refrain could have desperately used is a fast travel system. Since you’re always operating out of Marga, every time you head to a new location it means trudging through all of the areas you’ve been through so far to get there. You do have items that can take you instantly back to Marga, but there’s no such way to get around the rest of the world, even though there are campsites your party can rest at along the way. Higher level enemies do appear in the areas as the story advances, but after trudging through places for the tenth time I was definitely growing tired of the sights.

Despite originally being a PS3 game, Shining Resonance Refrain’s anime-inspired art style helps it still look vibrant. Battle animations are flashy, to the point that it sometimes slows down the framerate just a tad, but overall it’s fun to look at. Two of the game’s greatest strengths come with its voice acting and soundtrack, both of which are overall strong. The soundtrack, in particular, the battles music is incredibly catchy, although it won’t shake up your list of greatest game soundtracks of all time.

It should be noted that the game has an optional “Refrain” mode, which it suggests you only play after beating the game once. This mode adds two new party members into the mix, Excella, and Jinas, characters from the main story. While it’s fun to control these powerful characters, this is clearly an extra mode considering the main story isn’t changed in any way, including the two character’s roles in the story. You can literally play as Jinas, while fighting Jinas for example. Because of this they aren’t actually joining your party, more like becoming playable characters, even though they do come with their own optional scenes to view.

Outside of the sometimes stupid allied AI, Shining Resonance Refrain doesn’t do anything “wrong,” it just doesn’t excel at much either. There’s little that gives the game a unique identity or sets it apart from the wealth of JRPGs available. From the characters to the equipment and combat, everything feels functionally fine but often uninspired. Shining Resonance Refrain certainly isn’t a bad JRPG, I just wish it took more chances or did more to really separate itself from the games that, clearly, inspired it.