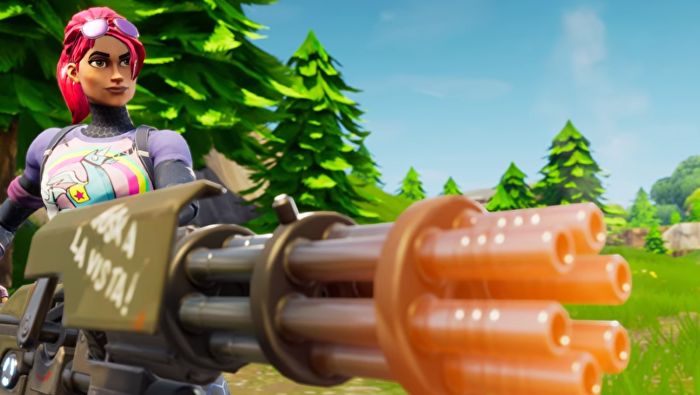 As part of Fortnite’s 2.4 update back in January this year, fans saw an exciting new weapon added into the game’s arsenal. The minigun was toted to offer the player the ability to “control the battlefield with sheer firepower,” decimating structures with relative ease and offering an alternative late game weapon to the countless rocket and grenade launchers that littered the closing stages of matches. And y’know what, it was okay.

It didn’t blow anyone’s mind, but combined with a shopping cart and a boatload of light ammo, you can make a neat propulsion system. It also works pretty well for pinning players down and destroying structures… but minigun-propelled shopping cart sounded better to lead with in my head. However, things have changed in the world of Fortnite. Though players still clamor for Scars and blue Tactical Shotguns, the minigun remains left on the floor and unwanted in chests. And we have absolutely no idea why, because it’s all kinds of broken right now.

In Fortnite’s 4.3 content update, a few significant changes were made in order to try and address the Rocket and Grenade launcher dominance in the late game. Not only was Explosive Ammo availability halved, removed from Supply Llamas, and in a later patch had a max ammo count of 12 imposed, but the minigun got a few buffs. Its accuracy was increased by 10%, and damage to structures upped from 25 to 30, essentially making it a more viable option for trying to deplete your opponent’s material stockpiles in the late game, to leave them open for some well-placed shots with no cover to hide behind.

Problem is, the 4.3 content update also saw Light Ammo spawns increase from 60 to 90, and also increased stack sizes from 12 to 18. Basically, it’s now incredibly easy to have a ton of light ammo to feed your hungry minigun when it gets into full swing.

All of this combined, however, puts the minigun in a bit of an insane league of its own. Sure, it takes a while to wind up before unleashing a terrifying bullet storm in the direction of some poor, unsuspecting fellow player, but once it gets going, and in the right hands, it’s unstoppable.

Thanks to its fast fire rate, the minigun is able to deal damage at a frightening pace. With DPS’ of 216 and 228 for the Epic and Legendary variants respectively, there’s only the new submachine gun, that was added in today, that can really compete, and even so, it doesn’t quite have the same laser-precise accuracy that the minigun seemingly has right now.

And it’s this that’s making the minigun a little too powerful in the Fortnite meta right now. Despite really being a close to mid-range weapon, the minigun can laser players from serious range, dealing a huge 47 damage per critical hit from this distance, too. Even top player Ninja acknowledges that it’s pretty broken right now… after he obliterates a player driving an ATV with one from range.

Despite now being acknowledged as part of Fortnite’s meta since this update, Epic still seems happy with the way the minigun is in Fortnite. Where Rocket Launcher reload times have been increased, and Hunting Rifle aim assists and double pumping dead in the water as of the v5.0 patch, the minigun remains untouched, evading a much-needed nerf in accuracy, or at least some damage drop-off to prevent it from being a precise killing machine.

Epic needs to do something about the minigun in Fortnite. Its buffs were clearly an effort to balance the late game playing field, but thanks to its accuracy bump and no nerf to damage drop off or general damage dealt to opponents, its effectiveness against opponents is borderline broken. No structure, nor person, is safe under the reign of the almighty minigun. We can only hope a nerf’s on the way in the coming patch notes this Thursday.