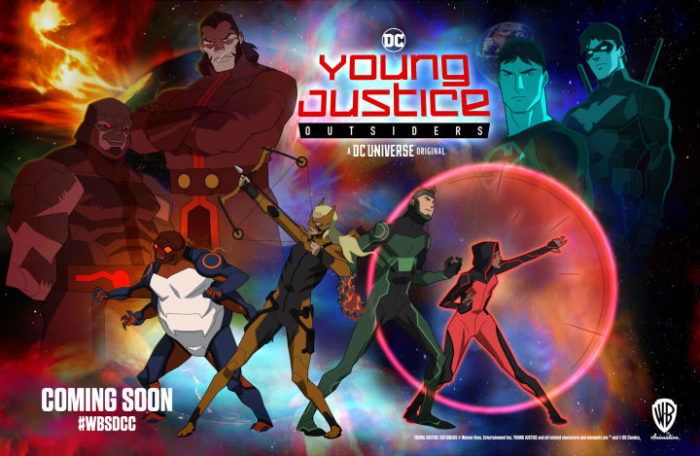 The first footage from the long-awaited third season of Young Justice has finally debuted at SDCC 2018. Young Justice: Outsiders began production back in late 2016, and has been announced as a part of DC Comics’ new streaming service DC Universe. Outsiders sees the team reuniting after the cliffhanger ending of Season 2 to take on a meta-human trafficking ring. We also get a hint at the pact between two of DC’s most iconic villains, Vandal Savage and Darkseid, that will surely give the team a headache later in the season.

All the classic players are here like Nightwing, Aqualad, Superboy, and Artemis. We also get a look at the not one, but two, new teams debuting this season. The new Young Justice team looks to include Static Shock, Kid Flash, Robin, Wonder Girl, Spoiler, Thirteen, Arrowette, Arsenal, and Beast Boy. The Outsiders are also shown off in the new trailer which look to include Nightwing, Katana, Metamorpho, Geo-Force, Forager, and an unconfirmed final member that seems to deal in light-based constructs.

The majority of the footage is a flashback of Season 2 so avoid it if you wish to avoid spoilers if you are not caught up. The montage for the upcoming season also gives some new looks at Batman, The Flash, Lobo, Bane, Orion of the New Gods and many others. Young Justice: Outsiders is set to debut in 2019 on the DC Universe streaming service.

Europa Universalis IV: Emperor Video Is All About Religion
To Top